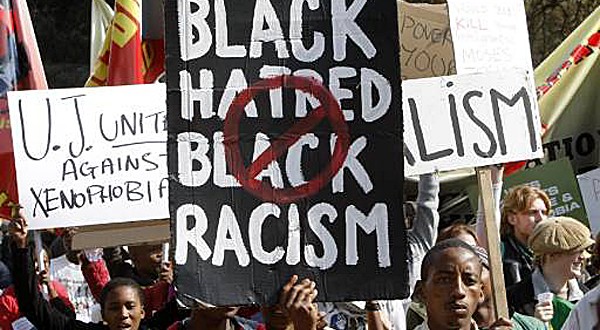 The Human Cost of Xenophobia

Three months after the South African government announced that it was planning to introduce a controversial stringent application process for refugees seeking asylum in the country, foreign-owned shops are being looted in Soweto and foreign nationals are being subjected to xenophobic attacks again. The way in which ordinary South Africans embody, (mis)construe and then act out the values and outlook of our socio-political institutions when it comes to the issue of foreign nationals is too remarkable to ignore.

Research done by the African Centre for Migration and Society at Wits shows that government officials and South African citizens often express views that migrants, particularly those from African and other developing countries, take jobs and economic resources away from South Africans. According to a report by People Against Suffering Oppression and Poverty (PASSOP), xenophobia “is further exacerbated by South Africa’s policy favouring domestic applicants over foreigners in the job application process.”

It is within this climate that in November last year, the Department of Home Affairs (DHA) published a new 12 page asylum application form for comment, which the government says is designed to distinguish economic migrants from people with a bona fide case for refugee status. According to IRIN, the UN news service, the form includes detailed questions about education level and employment history. Additionally, the form includes a request that applicants provide documentation in the form of testimonials and pay slips. IRIN further points out that “there is also a new section on financial status that asks for details of bank accounts inside and outside South Africa and how much money the applicant has brought into the country.”

The DHA is of the view that the South African refugee system is “being heavily burdened by economic migrants”, while, on the other hand, research shows that South African traders oppose the presence of foreign-owned shops in the townships and blame foreigners for their struggling and failed business ventures. According to the African Centre for Migration and Society’s research findings, South African traders in the Western Cape, for example, have gone so far as to send threatening letters to foreigners who own shops in the townships instructing them to close their shops and leave the townships.

Letter writing did not take place in Soweto this past week; instead the whole repertoire of xenophobic activities we have grown accustomed to was on display and over 80 foreign-owned shops were looted.

Globally, those who fall under the African refugee category have, historically, always been viewed as unwanted migrants. Although more than 25 percent of the world’s refugee population live in Africa, research shows that there is a lack of interest in resettling African refugees off the continent. Researchers working in the field point out that the chances for resettlement out of Africa are increasingly slim for African refugees. The United Nations High Commissioner for Refugees’ (UNHCR) philosophical direction has also changed to reflect this global attitude towards African refugees. Academics who research the UNHCR are of the view that the UNHCR’s role in the 21st century is increasingly becoming about providing protection to internally displaced persons (IDPs), who, unlike refugees and asylum seekers, have not crossed an international border. Consequently, the UNHCR provides water, sanitation and health services in refugee camps in Chad, Djibouti, Ethiopia, Kenya, South Sudan, Sudan and Uganda. Additionally, the UNHCR pays for more NGO partnerships to provide humanitarian aid on the continent of Africa “than in any other continental region,” according to Jennifer Hyndman, a professor at York University.

The fact of the matter is research reveals that refugees are increasingly perceived as a socio-economic burden worldwide. However, unlike in Western countries where xenophobia is expressed via government policies and xenophobia is associated with right-wing segments of the population who exist on the periphery of the society, South African xenophobia has taken the form of a violent grassroots movement that periodically terrorises foreign nationals living or working in townships.

According to PASSOP, vicious xenophobic attacks have become commonplace in some Cape Town townships. The report by PASSOP further points out that in some cases, police officers are perpetrators of xenophobic violence. According to media reports, the police were part and parcel of the mob that looted foreign-owned shops in Soweto last week.

Two years ago, the Somali Association of South Africa and the Ethiopian Community of South Africa took the Limpopo Department of Economic Development and the police to the North Gauteng High Court claiming that “Operation Hardstick” was in effect unlawfully preventing refugees and asylum seekers from trading and operating businesses in Limpopo.

“Operation Hardstick” was initiated by Limpopo police in July 2012 to crack down on spaza shops and liquor shops operating without trading licenses. According to IRIN, over 200 Somali-owned shops all over Limpopo were closed down during July 2012, and in most cases, goods were confiscated without a receipt being issued. Although the High Court dismissed the case, the Supreme Court of Appeal ruled in favour of the Somali and Ethiopian community pointing out that by closing shops operated by refugees and asylum seekers with valid permits, the police acted unlawfully. The Court further ordered the provincial and national authorities to pay the legal costs of the case brought by the Somali and Ethiopian organisations.

Foreign-owned shops in the townships have become a focal point around which xenophobes in the townships organise. In different parts of the country, xenophobes take it upon themselves to initiate their own versions of operation hardstick. In Cape Town, Operation Hardstick has manifested itself through robbery and sometimes via the killing of Somali business owners. In the past week in Soweto, residents rolled out their own version of Operation Hardstick and looted foreign-owned shops.

Every time Operation Hardstick rear its ugly head, it leaves behind disrupted lives and sometimes grieving spouses and children. The human cost of intolerance is too high.

Mandisi Majavu, a PhD candidate at the University of Auckland, New Zealand, is the book review editor of Interface: A Journal For and About Social Movements. He is the co-editor of 'Visual Century: South African Art in Context Vol 4: 1990 - 2007' (Wits Press, 2011). Some of his work has appeared in the anthologies: 'Real Utopia: Participatory society for the 21st Century' (Ak Press, 2008) and 'Beyond Borders: Thinking critically about global studies (Worth Publishers, 2006).
Previous: Will the Greek Elections Strengthen the Hands of the Global South?
Next: The Anti-Politics of Terrorism