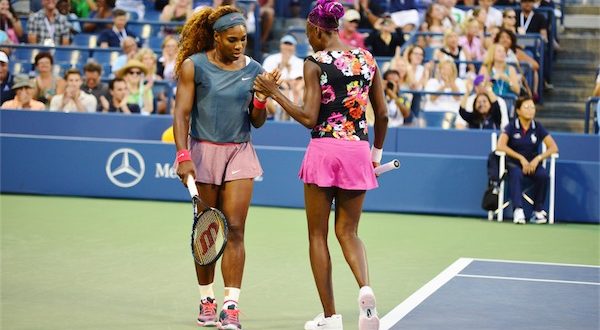 Serena and Venus Williams after the US Open grand slam contest in 2013. Edwin Martinez from the Bronx - Wiki Commons

The Williams sisters keep making tennis history. Nearly two decades after Venus Williams first beat her younger sister Serena in the Australian Open in 1998, the professional sibling rivalry continues as they are set to face each other in their ninth grand slam finals on Saturday. It will be the 28th time in their legendary tennis careers that they have faced each on the court.

We know that a Williams is going to win the Australian Open Tennis Championships 2017, but which Williams sister will it be?

Tomorrow’s match will be her eighth Australian Open final and she is only one win away from passing Steffi Graf’s open era record of 22 grand slams. A win would mean that Serena returns to the world number one spot. But to achieve all of this she has to beat her toughest opponent, a player who has beaten her more than any other player: Venus Williams.

At the age of 36, Venus became the oldest Australian Open singles finalist of the open era after coming from a set down to beat CoCo Vandeweghe 6-7 (3-7) 6-2 6-3 in the first semifinals match.

Venus Williams has still got it, and she is a perfect example of “form is temporary, class is permanent”. But this will be Venus’s first grand slam final since losing to Serena in the 2009 Wimbledon final, and it will be her first Australian open final in 14 years.

Looking at their head to head statistics, Serena holds a 16-11 lead in the Williams rivalry. The upcoming Australian open final will be their 15th clash at a major and their 9th in a slam final.

Whichever way it goes, a question to ask is, Will this be the Williams’ last grand slam final?

The Williams sisters have gone head-to-head in two previous Australian Open grand slam finals, Venus winning in 1998 and Serena in 2003.

Here is a rundown ahead of their ninth slam final encounter:

Today Serena leads 5-2 in slams finals win. What will the score be tomorrow?

Williams Sisters off the Court

The Williams sisters might be rivals on the court but off the court they have a close relationship supporting and backing each other. Even when playing against one another, the two are seen to walk off the court together and share loving messages. The strength of their relationship is illustrated in a tweet where Serena said that Venus was an inspirational woman and there was nothing she wouldn’t do for her sister. She also says she is fortunate to have Venus as a sister.

The two even talk before a grand slam final rather than avoiding each other as most opponents would do.

After her semifinal win, Venus said that it was unbelievable to watch Serena play tennis, and It would be a dream to see her on the opposite side of the net on Saturday.

To be in the final together is a dream Serena Williams

Serena said: “I am proud of Venus, to be in the final together is a dream. Did you think you would see us playing against each in a final again? I feel no matter that we have both won after all we have been through. I know a Williams is going to win this tournament!”

Serena is the favorite to win but Venus has been playing beautiful tennis, and it can go either way. With many of their encounters usually going into the third set, It promises to be a close match.

There is no doubt it is going to be an historic and epic clash on Saturday night at the Rod Laver Arena Melbourne.

Previous Ingredients in Antiseptic Wash Products Banned by FDA
Next AB de Villiers Saving Himself for the Cricket World Cup – or What?