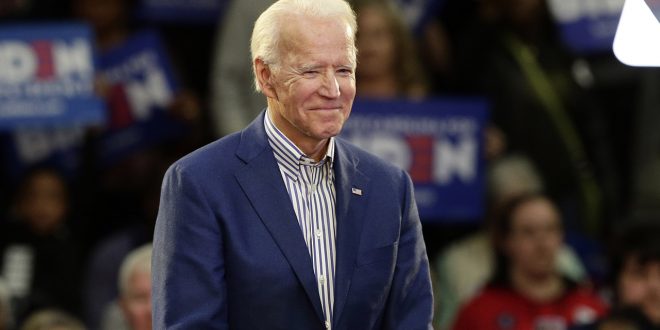 After poor fourth- and fifth-place finishes in Iowa’s caucuses and New Hampshire’s primary, followed by a distant second-place showing last weekend in Nevada’s caucuses behind rival Sen. Bernie Sanders, Biden — the once-unrivaled front-runner in the Democratic race to take on President Trump in November — greeted a crowd of energized supporters at his victory celebration in South Carolina’s capital city.

“Just days ago the press and the pundits declared this candidacy dead,” he said. “Now, thanks to all of you, the heart of the Democratic Party, we just won — and we won big. We are very much alive.”

In the Palmetto State, where Biden was counting on his popularity among African-Americans, he captured 48 percent of Democratic presidential primary voters, crushing Sanders by nearly 30 percentage points and making up lots of lost ground to the populist senator from Vermont in the all-important race for convention delegates.

But the true test for Biden will come this week on “Super Tuesday” – when 14 states from coast-to-coast, including delegate-rich behemoths like California and Texas, hold primaries that offer a potential combined prize of a third of all nomination delegates.

Biden is hoping his impressive victory in South Carolina – long considered his campaign firewall – will give him plenty of free media coverage and momentum heading into Super Tuesday and help him make up for plenty of lost ground to both Sanders and multibillionaire Mike Bloomberg in the coming contests.

Fresh off his victory, Biden sought to make sure his supporters knew what was at stake Tuesday.

“As we celebrate tonight here in Columbia, I want to talk to Democrats across the country, especially those who will be voting on Super Tuesday. This is the moment to choose the path forward for our party. This is the moment and it’s arrived,” Biden said. “The decisions Democrats make in the next few days will determine what this party stands for, what we believe and what we’ll get done.”

“The decisions Democrats make in the next few days will determine what this party stands for, what we believe and what we’ll get done.”

Sanders, speaking Saturday evening at a rally in Virginia – the fourth-largest of the Super Tuesday states, spotlighted the victories in February that made him the front-runner in the race.

But the independent senator who’s making his second straight White House run, acknowledged he came up short in South Carolina.

“You cannot win them all … and tonight we did not win in South Carolina. And that will not be the only defeat,” he said. “There are a lot of states in this country. Nobody wins them all. I want to congratulate Joe Biden on his victory tonight. And now we head to Super Tuesday.”

“Sanders deserves a lot of credit for his big win in Nevada last week. But Biden had an even bigger win in a bigger state with more delegates at stake in a primary with higher turnout and he had no momentum coming in,” said Elleithee, a senior spokesman for Hillary Clinton’s 2008 presidential campaign who later served as communications director for the Democratic National Committee.

“Unlike Bernie going into Nevada, he had no momentum going in,” Elleithee added about Biden. “People were writing his political obituary. So this is a pretty remarkable victory for him and one that should give his campaign a little bit of momentum.

“Question is,” he added, “with only three days until Super Tuesday, will it be enough momentum?”

As Biden spent nearly all his time concentrating on South Carolina and Nevada in recent weeks, Sanders and former South Bend, Ind., Mayor Pete Buttigieg have been campaigning and pouring resources into the Super Tuesday states.

While Biden’s been upping his game when it comes to fundraising – announcing he’s been pulling in $1 million per day since his muscular performance in Tuesday’s prime-time presidential primary debate – Sanders’ campaign touted early Sunday that it had raised a whopping $46.5 million in February. That pads his already formidable lead over Biden in the race for campaign cash.

Sanders was already massively outspending Biden when it comes to putting up TV, radio, and digital ads in the Super Tuesday states – and his campaign said it would start airing TV commercials in the March 10 and 17 primary states.

And then there’s Bloomberg, who’s already spent more than $200 million – an unprecedent figure – to carpet the airwaves and social media with ads in the Super Tuesday states, where he’s also built up an extremely formidable and large campaign staff.

“It’s time to unite behind the candidate who can beat Trump. @joebiden has the experience, character, and broad appeal to win Virginia and the White House in 2020,” McAuliffe tweeted.

In Virginia, the latest live telephone operator poll of likely Democratic primary voters indicates Biden in the lead, with a 5 percentage point advantage over Sanders and 9 points ahead of Bloomberg.

Black voters were a key to Biden’s success in South Carolina.

That will likely help Biden consolidate his support among black voters going forward.

Another rival who had a first place finish in Iowa and a close second place showing in New Hampshire before unimpressive results in Nevada and South Carolina was Buttigieg.

At a campaign event in Raleigh, N.C., Buttigieg said “I want to salute all of our competitors and I congratulate the vice president on his victory tonight in South Carolina.”

“Running for president is an exercise in hope and in humility,” Buttigieg added. “And we have come down South filled with both.”