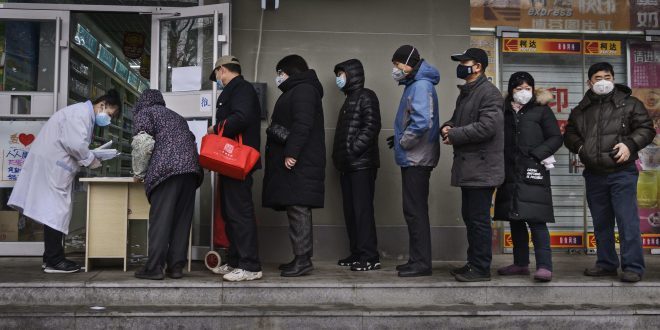 This is a live blog. Please check back for updates.

All times below are in Beijing time.

After plunging more than 7% on Monday, Chinese shares turned positive in the first half-hour of trade on Tuesday. The Shanghai composite index rose around 0.65% and the Shenzhen component jumped 1.82% — investor sentiment across the region appeared to have improved somewhat as other major indexes also posted gains.

Ratings agency Moody’s said the coronavirus outbreak would hurt China by lowering discretionary consumer spending on transport, retail, tourism, and entertainment. But, the government has the financial means to absorb the economic shock, according to the firm.

Construction began for two new emergency hospitals aimed at combating the coronavirus outbreak in the city just over a week ago, with crews working around the clock to complete the facilities. The Huoshenshan hospital is said to have 1,000 beds, while the second facility would have 1,500 beds, the Associated Press reported.

9:11 am: Uber, Lyft riders of Asian descent reporting discrimination in the US

Riders told CNBC their drivers are refusing rides from people with Asian sounding names. A Facebook group with more than 12,000 Lyft and Uber drivers had many of its members say they did not want to pick up riders of Asian descent and that it was unsafe to do so.

A CNBC search found dozens of tweets involving both riders and divers reluctant to share a car with a person of Asian appearance.

8:59 am: China says it hopes US will provide assistance to battle the outbreak

Chinese foreign ministry spokesperson Hua Chunying in a statement urged the U.S. to refrain from overreacting to the epidemic and to cooperate with Beijing and the international community’s efforts in containing the outbreak. Hua said China hoped the U.S. would provide relevant assistance soon.

Though the U.S. last week moved to deny entry to any foreign nationals with recent travel history in China, President Donald Trump previously tweeted Washington has “offered China and President Xi any help that is necessary.”

China’s National Health Commission said there were an additional 64 deaths and 3,235 new confirmed cases. It said all of the additional deaths were in Hubei, where Wuhan is located. That brings the country’s total to 425 deaths and 20,438 confirmed cases, the government said.

The Hubei Provincial Health Committee confirmed an additional 64 deaths and 2,345 cases through the end of Monday. It confirmed that total cases have risen to 13,522 as the death toll in the province hits 414.

The province’s capital, Wuhan, is considered the epicenter of the outbreak. Although other countries have reported their own cases, the vast majority are still located in China.

All times below are in Eastern time.

5 pm: Washington State patient has been treated and discharged

The coronavirus patient in Washington State has been treated and discharged from Providence Regional Medical Center in Everett, Washington, a spokeswoman from the Snohomish County Health District said. The patient is recovering in isolation at home, the spokeswoman said. “I am at home and continuing to get better,” the patient, whose identity remains unknown, said in a statement. “I appreciate all of the concern expressed by members of the public, and I look forward to returning to my normal life.”

Goldman Sachs canceled its annual partners meeting scheduled for this week because travel restrictions resulting from the coronavirus outbreak prevented some Asia-based employees from making it to the bank’s New York headquarters, according to two people familiar with the plans. Chief Executive Officer David Solomon will instead host a townhall meeting for about 250 of the partners able to attend in New York, one of the people said.

The Centers for Disease Control and Prevention is now working with state and local health authorities to prepare facilities for quarantine. The Trump administration announced a mandatory 14-day quarantine on Friday for any American who has traveled to Hubei province in the two weeks prior to the announcement.

“The discussions about where those patients will go is a conversation the CDC has been having actively with the state and local health departments,” Dr. Nancy Messonnier, director of the National Center for Immunization and Respiratory Diseases, said Monday. “We are working through an operational plan that might be slightly different at each of those locations depending on how much preparation they’ve done.”

There are currently 195 Americans in mandatory quarantine, according to health officials. But that number could grow.

For more coverage on the coronavirus, read the overnight blog from CNBC’s U.S. team.