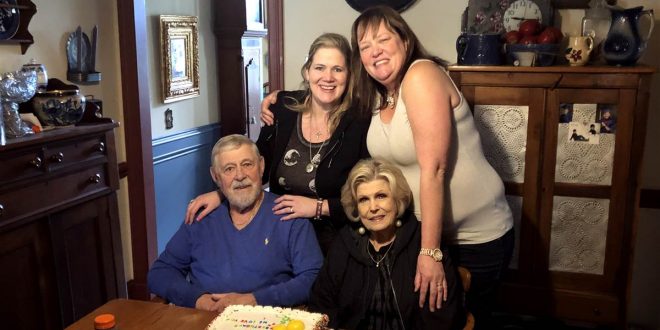 Her father’s delirium was a first sign of coronavirus. He’s not the only one.

Nicole Hutcherson first noticed something was wrong with her father — normally a spry early-riser who enjoyed yard work and home renovation projects — earlier this month, when he wasn’t getting out of bed until nearly midday.

Her dad, Frank M. Carter, 82, of Goodlettsville, Tennessee, insisted he felt fine, despite some nausea and vomiting. Hutcherson suspected he was dehydrated, so she went to his house to give him intravenous fluids. Hutcherson is a nurse, and had supplies on hand.

Full coverage of the coronavirus outbreak

That was when she noticed her father, who had shown no previous signs of dementia, was largely unaware of what was happening around him.

“He looked distant,” Hutcherson recalled. “He just had this weird look in his eye, like his mental status had changed.”

Carter didn’t react at all when his daughter put the IV needle in his arm. “It was like he was sedated,” she said.

Hutcherson believes that the delirium she noted in her father was one of the first signs that he had been infected with the coronavirus. Carter died within a week.

There is growing evidence to suggest that COVID-19, the illness caused by the coronavirus, can affect not only the lungs, but the brain, too.

A recent study of 214 patients in Wuhan, China, where the pandemic started, found more than a third had neurologic manifestations of the disease, including loss of consciousness and stroke.

Physicians in the U.S. have noted the same.

“We’re seeing a significant increase in the number of patients with large strokes,” Dr. Johanna Fifi, associate director of the cerebrovascular center at the Mount Sinai Health System in New York City, said.

Many are patients in their 30s and 40s. Over a recent two-week period, Fifi told NBC News she had five COVID-19 patients under age 49, all with strokes resulting from a blockage in one of the major blood vessels leading to the brain.

Two of those patients had what Fifi described as mild coronavirus conditions before the stroke. The other three had no symptoms at all.

How the virus might lead to a stroke or other neurological impairment remains unclear. Fifi said it’s possible that inflammation in the body could damage blood vessels in the brain, or that the viral infection leads to increased clotting.

“I don’t think we know right now which one it is,” she said.

Dr. E. Wesley Ely, a professor of medicine and critical care at Vanderbilt University Medical Center, has another theory: that the virus is “probably invading the brain.”

Ely explained that symptoms such as loss of smell and taste reported among some coronavirus patients are neurologic in nature.

“This virus goes into your nose, and says, ‘I’m just going to attack the first thing I see.’ That’s the respiratory tract,” Ely said. But because humans have no immunity to this new virus, it’s possible that it can attack any part of the body, including the brain.

“That’s something that still needs to be teased apart and figured out,” Dr. Felicia Chow, an assistant professor of neurology at the University of California, San Francisco, said.

But the issues surrounding loss of taste and smell “make us highly suspicious that … the cranial nerves may be affected by the virus,” she said. “We just don’t have any direct proof at this point.”

To fill that void, Ely and colleagues with the Critical Illness, Brain Dysfunction and Survivorship Center, in partnership with Vanderbilt and the Nashville VA, have launched a study of post-mortem brain tissue to look for signs of COVID-19 in the brain. The National Institutes of Health is funding the research.

The team will examine the brains’ neurons for damage, measure various brain regions to see if parts have become unusually small, and analyze the hippocampus, which plays a large role in memory. They’ll also look for evidence of amyloid and tau, two proteins linked to dementia and Alzheimer’s disease.

“Anything we find is important because we’re trying to understand the pathophysiology of this disease,” Ely said.

The first brain donated to the project was Frank M. Carter’s.

Hutcherson urged others to watch for unusual cognitive changes in family members, including lapses in consciousness and unexplained confusion. It is unknown whether Carter had suffered a COVID-19-related stroke.

Chow added that awareness of other stroke symptoms is also critical, including “drooping of the face, weakness of the arm or leg, especially on one side, and difficulties either understanding or producing speech.”

“Those are definitely symptoms of a potential stroke and a reason to immediately call 911,” whether they’re related to COVID-19 or not, Chow said.

Delaying care can have devastating consequences. “One of our patients waited over a day at home, getting progressively weaker,” Fifi, of Mount Sinai Health System, said. The patient told physicians she’d been afraid to go to the hospital because of the coronavirus outbreak.

“If you’re having symptoms, it’s safer to be in the hospital,” Fifi said.

“If you don’t re-establish blood flow quickly, the brain becomes irreversibly damaged. The sooner you do it, the better.”