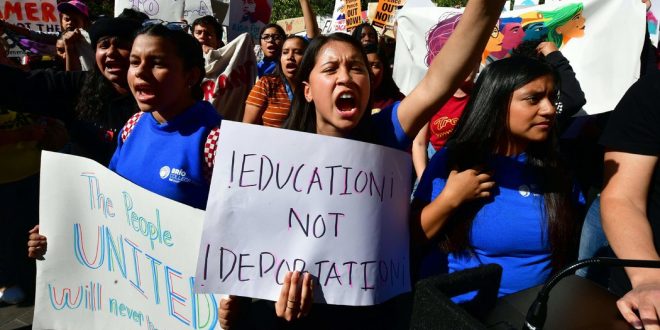 “These policies are not about people who came to our country illegally but have otherwise been peaceful and productive members of society,” Mr. Barr said in a speech at the National Sheriffs’ Association conference in Washington, D.C. “Their express purpose is to shelter aliens whom local law enforcement has already arrested for other crimes.”

Such laws passed by local and state governments generally restrict whether and how the local police shares information with the federal authorities about a person’s immigration status. Five states, as well as counties in nearly 30 states, have enacted them.

Under President Trump, Justice Department officials have argued that such laws are unconstitutional and obstruct the federal government’s ability to enforce immigration laws, including removing immigrants who entered the country illegally or committed a crime.

The department has used several tools to punish state and local governments that enact these laws, including withholding grant money.

In 2018, the department sued California over three state laws, accusing state officials of making it impossible for federal immigration officers to deport criminals born outside the United States.

While a federal judge in California dismissed most of the federal government’s claims, Mr. Barr said that he was hopeful that “the Supreme Court will grant our request to review the remaining issues and side with us against California’s obstructionist policies.”

Despite the setback in court, the Justice Department on Monday again sued California, Gov. Gavin Newsom and the state attorney general, Xavier Becerra, over a state law that it said interfered with the work of federal immigration authorities.

It also sued New Jersey, Gov. Philip D. Murphy and Attorney General Gurbir Grewal over an enforcement directive issued by Mr. Grewal that prohibits state officials from sharing information about the immigration statuses of people in the custody of federal Immigration and Customs Enforcement.

Last month, the Justice Department filed a statement of support in an existing lawsuit brought by two New Jersey counties against the directive, which also requires local and state law enforcement officials to notify anyone in custody if federal immigration officers ask that they be detained.

In a statement, Mr. Grewal called the Justice Department’s lawsuit an “election-year stunt” that “sacrifices public safety for political expedience.”

“Thankfully, nothing about today’s lawsuit changes our work on the ground,” Mr. Grewal said. “While the president grandstands, we’re focused on protecting the nine million residents of New Jersey.”

Mr. Barr said the Constitution gave the federal government the sole authority to make and enforce immigration law. Lawmakers from both parties have long authorized the removal of immigrants who commit certain crimes, he said, citing a 1996 law signed by President Bill Clinton that prohibits the restriction of information-sharing about immigrants.

Jenny Durkan, the mayor of Seattle and a former United States attorney in Washington State, pushed back on the new lawsuits.

“When the Department of Justice previously wasted resources and tried to take on the City of Seattle, they lost, and I’m confident they will lose again,” she said.

Ms. Durkan said that when she was the top federal prosecutor in the area, the office focused on fighting crime including human trafficking, gun violence and homegrown terrorism, suggesting that those were higher priorities than helping facilitate deportations. She said Seattle would continue to work with other local governments and federal officials on those issues.

Mr. Barr drew a distinction between people who enter the United States, often illegally, and commit crimes, whom he called “criminal aliens,” and people who simply enter the country illegally. He said the pushback on sanctuary laws was also intended to help immigrants.

“It is often the very immigrant communities that these policies are marketed as protecting who are disproportionately harmed — when criminal aliens are returned to the streets rather than removed from the country, as federal law requires,” he said.

But critics said the department’s overall stance would do more to make immigrants reluctant to work with the authorities.

“Conflating immigration and crime is false and unproductive,” said Kelsey Nyland, a spokeswoman for Ms. Durkan, adding that immigrants were “key witnesses” when Ms. Durkan was a United States attorney. “Prosecutors need witnesses who feel safe working with authorities to help them understand what happened. What the Justice Department is doing now will push those potential witnesses into the shadows.”