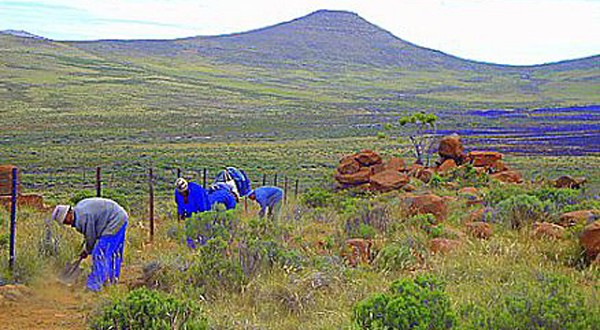 Labour Rights and Karoo Farmworkers: Can Power Relations Be Challenged?

The Labour Relations Amendment Act of 2014 (Section 198 of the LRA) introduces important new rights for labour broker, contract and part-time workers. Two issues emerge in relation to how these new labour rights affect farmworkers in the Karoo.

Prolonged unfair labour practices and human rights abuses have bred explosive tensions in rural towns and on commercial farms. This could spark protest and resistance to challenge power and property relations in the Karoo. In my view, it’s high time for real change.

What are the new labour rights? In a nutshell they stipulate that all non-standard workers (standard workers are permanently employed full time workers) should be permanently employed after three months and receive the same benefits and opportunities as permanent workers that work for the same employer. It’s important to point out that there are exceptions and negotiable aspects built into the Act that generate loopholes for employers seeking to escape implementing these rights. For example, employers who employ less than ten workers are exempted and seasonal workers in the agricultural sector don’t have access to the new rights.

Moreover, the Minister of Labour has the power to decide which categories of temporary workers will be included and excluded in Section 198. This makes lobbying important. However, in contrast to the well-established organisations that represent South Africa’s commercial farmers, farm workers have no powerful lobby to influence policy.

Why will the new rights not directly improve the lives of farm workers?

Farm workers’ experiences and lives are shaped by histories of dispossession and forced labour on white-owned commercial farms. In the semi-arid Karoo, farmworkers have been both working and living in remote and isolated places governed by so-called farm laws. These are local understandings about who gets to make decisions and whose knowledge is valued and recognised. Consequently, the very idea of introducing state enforced progressive labour rights for farm workers (which only happened during the early 1990s) doesn’t make sense to farmers.

What the Farmers Say About Labour Rights

For example, a Karoo farmer informed me that he regards labour laws for farm labourers as problematic because “a person has got to be able to work, I say, for what he is worth,” and this should be determined by the farmer. State law is therefore perceived as an invasive regulating force that questions the farmers’ judgement.

Just a week ago while doing fieldwork in Cradock, a farmer nearly exploded with anger and frustration when I mentioned that I was researching land reform farms in the area. Red in the face, the farmer loudly exclaimed that the only knowledgeable people producing on the land are white farmers. His version of events is that he sold some of his farms to Government that “gave it to the worst people” who “opened a shebeen on the farm and the only thing they do is drinking.”

The problem, according to the farmer, is that researchers from outside don’t do their research properly. The expectation was that I should listen to the farmers, learn from them, and adopt their world view to distinguish right from wrong in the countryside.

The existential fear of losing their land and becoming irrelevant in post-apartheid South Africa drives some farmers to defend their turf with a deepened conviction that their presence and practices are legitimate and superior. They use extreme power imbalances to protect their own truths. Tragically, this is also commonly achieved through violence.

Farmers’ fists have remained instrumental in attempting to maintain a docile labour force on the farms. There are still farmers in the Cradock area that get away with threatening and beating workers. A man who used to work for the farmer that aggressively imposed his views on me referred to him as ongeskik (improper). Moreover, he mentioned that another notoriously ongeskik farmer in the area beat a worker to death not so long ago. There was no outcry about the alleged murder.

Where Do Farm Workers Stand?

It reminded me of 2009 whilst I lived in Cradock when an elderly farmworker said to me, around Cradock,

the Bible is a fist

The experiences of farm workers and dwellers remain hidden in the violent power relations of the semi-desert. Even when farm workers do decide to lay charges against farmers for assault and abuse, employers have the means to corrupt the justice system and can even pay workers for their silence. A freelance journalist in Cradock working for the Vukani community radio station frequently reports such instances as the rule rather than the exception. But such violent truths refuse to evaporate.

Local institutions, such as the Department of Labour, that should enforce labour legislation on farms, fail to protect and keep farm workers informed. A clear example of this is that the Cradock Advice Office experiences resistance from the Department of Labour when asked to take action against a private labour consultant operating in the area. The consultant is paid by employers and farmers to handle disputes with labourers. Farmers introduce the labour consultant to workers, as someone from the Department of Labour. Consequently, farm workers are duped into signing “settlement agreements.” As one farmworker, who initially refused to sign, recalled: “He said if I would not sign, I would not get my money. So, I signed.” The farm worker was dismissed and along with his wife was evicted from the farm on the same day.

Such a letter states that workers “voluntarily resign” and agree to receive compensation in cash and never claim their rights through councils that have the jurisdiction to deal with labour disputes. Farmworkers who went to the Department of Labour with their letters were told that the Department could do nothing for them. Their demands for justice are reduced to processing a UIF claim. Unfair labour practices and injustices are normalised and farm workers’ attempts to access justice to challenge the system is sabotaged by civil servants.

Unsurprisingly, farm workers are highly suspicious of local institutions that have ineffectively enforced state laws aimed at improving their situation.

What potential do the new labour rights hold in such a challenging and violent context? What are the prospects for farm worker protests in the Karoo?

Up to now the most common way to upset the power balance on the farms has been for workers to pack their stuff and leave when conditions get unbearable. For generations there have been everyday forms of protest and resistance on farms; foot dragging, non-conforming, absence from work, and stealing or destroying property. This kind of farm worker agency has forced farmers to negotiate all sorts of favours and provide services like transport, housing and food supplies. But this form of paternalism is disappearing rapidly with the state’s introduction of more progressive laws. For example, since the minimum wage increase following the Western Cape farm workers’ protests, workers increasingly experience being charged for services that used to be part of the labour arrangement.

It will take more than fair labour conditions to transform relations on commercial farms. From the standpoint of workers, violent and paternalistic farm laws dehumanize and oppress them. However, the prospects for tenure and job security have also deteriorated after more than 20 years of democracy.

Farm workers need sustainable livelihood opportunities that include tenure security, access to land, housing and spaces to belong. Farmers are aware that the tensions on their farms are emerging from a crisis bigger than working conditions and low wages. Real transformation would mean radically changing disparate land ownership structures in the region as well as the oppressive relationships maintaining that structure. To address farm workers’ needs is to completely re-think the commercial farming landscape.

Together with the Cradock Advice Office, CALUSA and the Southern Cape Land Committee, I have been documenting workers’ experiences to collect evidence to expose the injustices in the area.

Farm workers’ prospects are bleak. In the highly volatile context of the Karoo’s power and property relations, farm workers have good reason to consider how to defend themselves against the systematic violence they experience. As local institutions fail to protect or empower them, it looks like it will be up to farm workers to decide how to challenge the abusive relations and demand their rights, democracy and transformation in the countryside.

Dr Femke Brandt is a post-doctoral fellow at the Centre for African Studies at the University of Cape Town. Her research is about power relations in the commercial farming landscape, experiences of farm workers and land reform in the Chris Hani District of the Eastern Cape.
Previous Commissions of Inquiry or Omission?
Next Future for Progressive Politics in South Africa