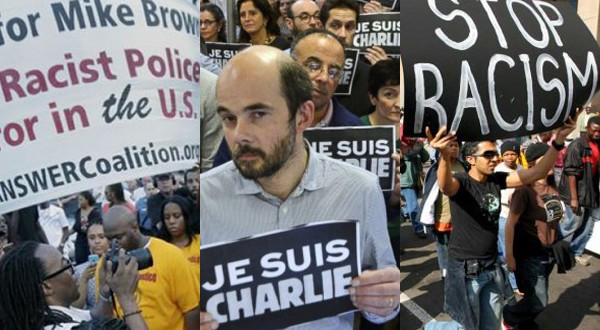 On Not Reducing Racism to Apartheid

We would be more effective at dealing with the endemic racism in our society if we didn’t relentlessly speak in a manner that reduces racism to apartheid and ‘apartheid tendencies’. The reason for this is not because historical trauma should be repressed and its consequences in the present naturalised. On the contrary it is because the development of an adequate understanding of how our society came to be as it is requires us to speak a lot more about both colonialism and neo-colonialism, and to take both phenomena seriously as powerful forces on the global stage that, from Ferguson to Paris and Johannesburg, continue to shape the present.

Apart from the occasional buffoon like Steve Hofmeyr, and the noxious trolls that waste their lives, such as they are, on the comments sections of the online media, very few people will publicly defend apartheid in 2015. But as we all know, racism remains a malignant force everywhere, from our universities to the streets of suburban Cape Town. One reason for this is that it is perfectly possible to oppose apartheid, to see it as a crude and embarrassing anachronism, and to think, speak and act in ways that reinscribe racism.

Although racism has retained some constant features since the seventeenth century, it is also a dynamic phenomenon. There has, for instance, been a shift in the legitimation of the racism permissible in polite society from biology to culture. In political terms colonial rule was largely replaced by the rule of European and American controlled financial institutions during the second half of the last century, backed up with an American invasion where necessary. In Western Europe Muslims have often replaced Jews as an imagined threat to what used to be conceived as a Christian way of life and is now frequently thought of as a Judeo-Christian way of life.

If we are not attentive to the ways in which racism mutates over time and we focus the bulk of our opposition to racism on its outmoded forms then its forms that are most dangerous, because they are authorised by contemporary forms of power, will not be recognised and opposed with sufficient clarity and force. Racism is not just the Ku Klux Klan, Nazi Germany or apartheid South Africa. It doesn’t only come in a white hood, a fascist uninform or khaki. It also wears a suit or Manolo Blahniks. It speaks English, and French, as well as Afrikaans. It is abundantly evident in The Daily Mail, Walt Disney films for children, the World Bank and, in some cases, certain kinds of academic consensus in the most prestigious universities in the world.

In Europe today no one in polite society will offer their support to a teenage fascist from the backstreets of Leipzig or deny the mass murder of European Jewry in the first half of the 1940s. But it is acceptable to respond to the unconscionable murders that recently rocked Paris in a manner that assumes that France is part of a morally superior civilization and that erases France’s brutal colonial history, the massacre of Algerians in Paris in 1961, the day to day racism experienced by the descendants of immigrants from North and West Africa or enduring French support for imperialism, such as, for instance, the refusal to allow Haitians to run their own country as they see fit.

There is a similar situation in the United States. There are no longer laws instituting segregation, there is a consensus that precludes the expression of certain forms of racism and celebrates a distorted image of Martin Luther King. But none of this precludes support for forms of de facto segregation, the murder, with impunity, of black men, the acutely racialized nature of the criminal justice system or imperialism wrecking devastation, with bombs and torture, around the world. In the United States, as in France, contemporary mainstream opinion takes the view that, as the liberal philosopher John Stuart Mill put it in 1859, “Despotism is a legitimate mode of government in dealing with barbarians.”

The Second World War was an important moment in the evolution of racism. After the war the open expression of racism, especially as a set of biological prejudices, lost much of its credibility and there was a shift towards an abstract affirmation of universal equality via the language of human rights. When India won independence in 1947 it was clear that colonialism would not endure indefinitely. But it was precisely at this moment, in 1948, that apartheid was instituted in South Africa and the state of Israel was declared. Although these two developments, both of which entrenched racism as a matter of law, went against the grain of the way things were going, the explicit racism that endured in English speaking settler colonies meant that the overt racism of apartheid was not an isolated phenomenon.

Places like the Deep South in the United States or South Africa and Australia, in which there was an overt commitment to white supremacy, instituted in law, were seen as peripheral, provincial and backward but they were still tolerated. Transnational white solidarity trumped the developing sense that overt racism, especially when inscribed into law, was illegitimate and indefensible. The United States sustained legal segregation until 1964 and the White Australia policy only started to be undone in 1966. The last lynching in the United States happened in 1968.

It was the civil rights struggle in the United States and anti-colonial movements across Africa that began to put an end to legislated forms of segregation and colonialism in the 1960s. From this point on apartheid came to be seen, along with white supremacy in Rhodesia, as irredeemably backward on the global stage. Metropolitan elites began to take a greater distance from their colonial cousins. The contingencies of the Cold War bought apartheid some time, but the game was up.

But, crucially, in the United States, and on the global stage too, the attainment of equality in principle in the 1960s did not translate into the attainment of equality in practice. Some of the language of racism changed – for instance European domination of African affairs was now a matter of ‘development’ – but racialized domination endured. Today the sort of racism that is present in, say, American sitcoms or philosophical discourses about the inherent ethical nobility of Europe, is rooted in the long history of colonial racism and functions to legitimate the enduring denial of equality in practice.

If we are to develop an adequate understanding of how our society came to be the way that it is, we can’t speak as if apartheid, imaged as an embarrassing provincial mistake in the broader context of enlightened whiteness, is the only cause of our problems. On the contrary we need to take, very seriously, the reality that apartheid was just one iteration in a long and global history of racism that continues to shape the present. We need to take the long history of colonial domination before apartheid and the neo-colonial power relations that have endured after apartheid in South Africa, and on the global stage, seriously. We need to take seriously the different value that, in 2015 is accorded to black life and white life in the United States, or to the lives of people in the Congo, Gaza or Mexico and (white) people in France.

Today it is easy to dismiss apartheid, or the Ventersdorp brandy and coke fascist, and to project racism onto the past, or onto people that appear to caricature that past in the present, while denying the presence of racism in ways of speaking and exercising power that are socially authorised in the contemporary world. Contemporary forms of racism do sometimes repeat the language and postures of the past. But they have no legitimacy on the public stage and are easily recognised and opposed. However contemporary racism also speaks an international language – perhaps with a French or American accent; a language that is not seen as provincial and backward, a language that is authorised at Harvard and in the Daily Mail. This can enable a whole set of authorised discourses -such as opposition to crime, support for the environment, human rights, feminism, commitment to excellence, philosophical rigour and economic rationality – to be misused for racist purposes. This makes the work of opposing racism more complex than the easy work of confronting the brandy and coke fascist.

Many white South Africans seem to assume that the end of apartheid, imagined as a temporary anomaly consequent to a backward form of Afrikaner nationalism, has meant the end of racism. This is often taken to mean that white South Africans are now able to rejoin a community of international whiteness. This space is often imagined, in an enduring colonial trope, as a space of enlightenment that offers a unique and precious gift to the world. When white South Africans see themselves as having a special connection to global whiteness they often succumb to the narcissistic fantasy that their presence in this society, in Africa, constitutes a unique and precious gift. This makes a sociality premised on actual rather than abstract equality impossible.

If white South Africans don’t give up their investment in global whiteness – and an identification with what they imagine to be the inherent moral superiority of the West or the First Word, they will, while scorning the brandy and coke fascist, continue to modernise rather than root out their racism.

Dr. Richard Pithouse teaches politics at Rhodes University where he teaches contemporary political theory and urban studies and runs an annual semester long post-graduate seminar on the work of Frantz Fanon. He writes regularly for The South African Civil Society Information Service. A nonprofit news agency promoting social justice.
Previous The Validity of CFS Research Findings Under Fire
Next Will the Greek Elections Strengthen the Hands of the Global South?