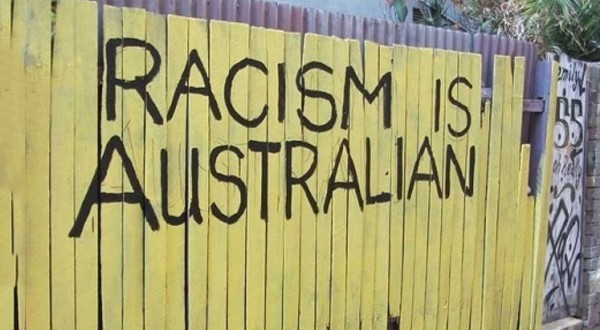 Racism Down Under: Reclaiming Whiteness

A 51-year-old white Australian woman, Michelle Veronica Jacobsen, who subjected a black African family to a nasty racist attack and threatened them with a crowbar, has been charged with assault, going armed in public as to cause fear, disorderly conduct and conduct likely to racially harass. Video footage of the woman hurling racist abuse to the black family is available online. Jacobsen, who appeared in the Perth Magistrate’s Court this week, had her case adjourned to next month.

Unlike South Africa’s RW Johnson who wielded a pen to spew his racist tirade likening Africans to baboons and Rottweilers in a 2010 article published by the London of Review of Books (LRB), Jacobsen wields a crowbar to enforce her racist outburst. Seventy-three prominent scholars objected to Johnson’s racism in a letter to the LRB.

When asked to explain her actions, Jacobsen argued, “I’m tired of feeling like I’m a minority in my own country.” Her reasoning is rooted in a notion of the Australian national identity that historically has been considered to be of white-Anglo heritage. For the greater part of the 20th century, that heritage was maintained via the Australian Immigration Restriction Act 1901, informally known as the White Australia policy. The White Australia policy was designed to keep out Chinese and other immigrants of colour.

The multicultural policies that replaced the White Australia policy in the 1970s have cultivated feelings of resentment amongst some white Australians.

In the last decade, Australians of black African descent have been the targets of white resentment. For instance, when a 19-year-old black teenager, Liep Gony, was beaten to death in Melbourne in 2007, the Australian media explained Gony’s murder as the consequence of a feud between rival black gangs. It was later revealed, however, that Gony’s attackers were young white Australian men who had gone out that night with the intent of taking their “anger out on some niggers.” Ajang Gor is another young black man who was assaulted by racist whites in Australia. Gor’s attackers called him a “black dog” while they beat him up.

Scholars call the racist vocabulary that whites share “racetalk.” One of the defining features of racetalk is the belief that blacks do not belong in white spaces. Hence, Jacobsen is of the view that her black neighbours should not be in Australia and that they should go back to wherever they came from. Similarly, in 2007, the then Immigration Minister Kevin Andrews, used racetalk to argue that black Africans had failed to integrate into Australia, and thus the Australian government had to make significant cuts to Australia’s intake of African refugees.

According to Anikó Hatoss, an Australian academic, “whiteness is still a strong factor in ascribing an Australian identity to newcomers, while blackness is associated with a refugee status and being an outsider.” Through racetalk, the label refugee is used to talk about black Africans as backward and pathological people at worst, or as “dysfunctional ‘others’ who are redeemable as long as they consent to assimilation and obedience to their white benefactors” at best. Jacobsen who subjected the black family to the racist attack in Perth obviously subscribes to the former discourse.

The Need to Challenge Racism

Obviously, the solution does not lie in creating black ghettoes or reducing Australia’s intake of black African refugees as suggested by Andrews. The solution includes challenging racism. One of the biggest psychological obstacles in successfully challenging racism is that whiteness invariably positions itself as a victim of anti-racist efforts.

For instance, the assumption underlying the logic of the white woman who attacked the black family in Perth is that she is being overburdened by the government’s expectations that she has to live peacefully with black neighbours. Within a multicultural Australia, some whites resent the feeling that they can no longer express their racist sentiments about people of colour. For example, former One Nation leader, Pauline Hanson, recently told a crowd at a Reclaim Australia rally, “Criticism is not racism.”

I should note that the brand of racism that the Reclaim Australia campaign subscribes to is Islamophobia. It is reported that Reclaim Australia events were staged in 16 cities and regional locations throughout Australia over the weekend. The name of the campaign Reclaim Australia interestingly reveals white angst over ineffectual and inadequate efforts by the state to disclaim whiteness as the defining feature of Australian society.

Whites reclaim whiteness in different ways. In an effort to assert her whiteness, Jacobsen unleashed a racist tirade against her black neighbours. Serious anti-racist efforts have to talk back and resist reclaim whiteness projects of any kind. In my on-going PhD research, I have found that racism has partly contributed to the disadvantaged social position that black African refugees occupy in Australian society. To change the status quo and to prevent future racist attacks on black families, racism has to be challenged in all its social practices.

Mandisi Majavu, a PhD candidate at the University of Auckland, New Zealand, is the book review editor of Interface: A Journal For and About Social Movements. He is the co-editor of 'Visual Century: South African Art in Context Vol 4: 1990 - 2007' (Wits Press, 2011). Some of his work has appeared in the anthologies: 'Real Utopia: Participatory society for the 21st Century' (Ak Press, 2008) and 'Beyond Borders: Thinking critically about global studies (Worth Publishers, 2006).
Previous How Can We Eat Well Affordably?
Next Political Significance of South Africa’s Protests