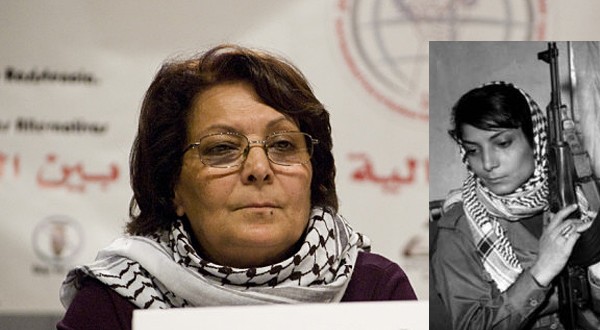 Amongst the audience in Parliament’s public gallery for President Jacob Zuma’s State of the Nation Address (SONA) was a Palestinian freedom icon who carried with her the hopes of all Palestinians that the ANC government would begin making moves towards cutting ties with Israel.

Leila Khaled, a decades-long leader in exile of the Popular Front for the Liberation of Palestine, was in South Africa, as a guest of the Boycott, Divestment and Sanctions (BDS) South Africa movement.

For a brief moment this week, after BDS South Africa released a press statement saying that Zuma himself had invited Leila Khaled to his address, there was a sense that perhaps the ANC government might be getting ready to do much more than voice support for Palestine while continuing to foster trade, diplomatic and intelligence relations with the apartheid state of Israel.

After all, Home Affairs minister Malusi Gigaba had welcomed Khaled when she landed in South Africa days earlier, and had even given a joint press conference with activists from the BDS movement, which wants a trade ban between Israel and South Africa in solidarity with Palestine.

However, BDS South Africa quickly backtracked on their announcement, saying that Khaled had been invited to the SONA not by Zuma but by senior parliamentary staff.  The very fact that BDS South Africa had to issue a correction indicated that someone in Zuma’s office had made it clear that the president was averse to the idea that he could have invited Khaled to his oration.

Although there was never any suggestion that Zuma would use his address to announce changes to South African relations with Palestine or Israel, if the president himself had invited Khaled, this would have suggested a move towards state endorsement of BDS. Eventually, Khaled’s presence at the SONA went unnoticed after local politics in the form of an Economic Freedom Fighters (EFF) anti-corruption protest stole the show.

The ANC Approach to Palestine

This was somewhat symbolic of the ruling party’s approach to Palestine over the past 21 years, where the ANC decries the brutal military occupation of Palestine by Israel in public, but behind closed doors props up the Israeli apartheid system. ANC relations with Israel are so cordial that the Israeli secret service is permitted to operate its own office inside OR Tambo airport.

Sometimes Israeli atrocities, such as the 2010 slaughter by the Israeli military of nine international peace activists who were sailing to Gaza to protest the Israeli siege, will prompt the ANC to make a gesture of outrage, such as recalling the ambassador to Israel. But even in this case, the ambassador was sent back to Israel after a few weeks. During his recall period, the spokesperson for the South African embassy in Israel repeatedly emphasised that the government had no intention of cutting ties with Israel.

The ANC government can do much more to support the Palestinians. The BDS campaign, and the Open Shuhada Street organisation before them, have focused so far on grassroots activism against Israeli products, with protests against Wellness Warehouse for stocking Ahava beauty products and demonstrations against Woolworths for stocking Israeli produce.

However, BDS South Africa protests have been marred of late by frequent outbursts of anti-Semitism by some of its members from COSAS and SASCO. Members of these organisations left pigs’ heads in Woolworths recently, and this week made the offensive demand that the Durban University of Technology expel Jewish students. After being challenged, they continued to insist that any student funded by Israel should be “immediately de-registered.” This was a misrepresentation of the academic boycott of Israel, which aims to have universities sever ties with the Israeli academy and refuse funding from Israeli institutions, but not to persecute local Jewish students.

Given that BDS South Africa, these days, is dominated by tripartite alliance partners, the ANC government should be obliged to give impetus to the global BDS movement by taking steps of its own. It could start by setting up a diamond beneficiation industry in South Africa and providing tax incentives to the major diamond mines to have their rough diamonds cut and polished locally.

The state of Israel receives an enormous boost from South African diamond mining companies, that send billions of rands worth of rough diamonds to Israel every year to be cut and polished. “With an annual turnover of some R280-billion and exports of R110-billion (net), the diamond industry is absolutely central to the Israeli economy, accounting for roughly 30 percent of exports and 5 percent of GDP in recent years, while providing employment for an estimated 20,000 people in Israel itself and an additional 35,000 abroad,” says the Palestinian Anti-Apartheid Wall campaign.

The campaign quotes Israeli political economist Shir Hever as saying: “Every time somebody buys a diamond that was exported from Israel some of that money ends up in the Israeli military, so the financial connection is quite clear. Overall the Israeli diamond industry contributes about R10-billion annually to the Israeli military and security industries.”

There is clearly no need for South African diamonds to be cut and polished in Israel. The media reported recently that a collective of organic rooibos tea farmers in tiny Nieuwoudtville in the Northern Cape had been disadvantaged after government suddenly arrived and set up a state funded rooibos tea processing factory in the same town, without any consultation. The government apparently insisted that the organic farmers sell them their tea (at a lower price than that previously earned by the collective on the Fair Trade market), or lose farming implements that had been donated by the state. So it is clear that the state has a large capacity to intervene in industry, contrary to government’s claim that it has not been elected to build factories.

One wonders, if the ANC can set up a rooibos tea factory for no apparent purpose, why it cannot set up a diamond cutting and polishing plant in the Northern Cape too? This would provide many hundreds of vitally needed jobs in diamond beneficiation and would be a form of sanction against the state of Israel, while leaving boycott and divestment to be advocated for by BDS South Africa.

For now, it remains to be seen whether the ANC’s support for BDS South Africa will evolve beyond words into concrete support for sanctions against Israel.

Anna Majavu is a writer concentrating on the rights of workers, oppressed people, the environment, anti-militarism and what makes a better world. She worked for the Sowetan from 2008 until 2011 when she moved to New Zealand.
Previous Your Visitors are also Targets With The Forbes Hack
Next Anyone Can Publish Fake Medical Research for $500