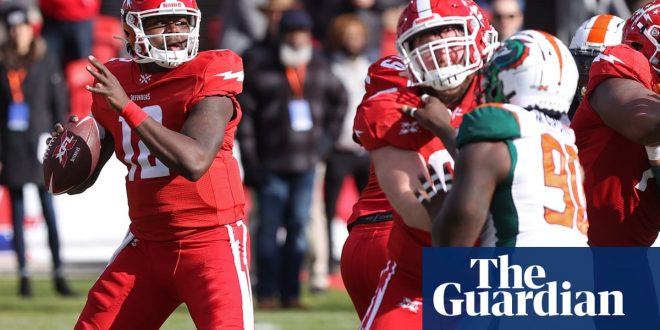 The debut of the new XFL had a punt blocked for a touchdown, a juiced-up crowd roaring for big plays and a player swearing during an in-game television interview.

The actual football was hit and miss. College national championship-winning former Ohio State quarterback Cardale Jones was the biggest star on the field and took the microphone to address fans before the start of a brand-new football league.

“This is for the love of football,” Jones said. “Enjoy.”

Jones’ DC Defenders beat the Seattle Dragons 31-19 Saturday afternoon in the opener of the new XFL that provided plenty of entertainment in person and on TV. It’s far too early to tell if the XFL can take a foothold where its previous incarnation and the recently unsuccessful Alliance of American Football failed, but executives are willing to wait and see.

“For us, if the fans who attend and watch at home feel as though it was a good football game and they had a fun time either watching or being in this awesome venue with us, that’s success,” XFL chief operating officer Jeffrey Pollack said. “We’re taking a long term view in this. Success ultimately will not be measured in the first game or the first weekend or the first season.”

The first weekend is a chance for football fans to catch a glimpse of some of the few players they might recognize. There’s former Oklahoma quarterback Landry Jones with Dallas, former NFL QB Josh Johnson with San Diego and ex-Navy standout Keenan Reynolds playing for Seattle.

It’s not the star power of the NFL, but billionaire Vince McMahon’s latest venture is an attempt to capture the attention of hardcore football fans in the aftermath of the Super Bowl.

“Our expectation for this first season is for football fans to simply give us a look, give us a chance, sample us,” Pollack said. “We understand that fandom is earned. It’s not given. … We think that if you love football, you’re going to love the XFL.”

In the league opener, a crowd of 17,163 almost filled up Audi Field, home of Major League Soccer’s DC United. There was a buzz around the stadium in the hours before the XFL’s debut, with cars lining up to enter parking lots and fans checking out a league-sponsored tailgate. Fans were already draped in Dragons and Defenders gear and queued up in long concession lines at halftime.

The location of the first game made sense in the neighborhood of the NFL’s Washington team, who haven’t won the Super Bowl since 1992 and have just one playoff victory in the past 20 seasons. Fan-made signs mocking the “Hail to the Redskins” slogan and asking Redskins owner Dan Snyder to sell the team were draped from a balcony at the 50-yard line.

The broadcast included in-game interviews with a kicker seconds after he missed a field goal attempt and a defender involved in a scrum that led to a penalty. Seattle’s Dillon Day dropped an F-bomb that made it to the airwaves and went viral.

On the field, the play was a mix of traditional college and pro style with some different twists.

There was no coin toss, and when Reynolds fielded the opening kickoff, he did so with everyone else on the field standing still as part of a rule implemented for safety. With no extra point kicks, teams had the option of trying one-, two- or three-point conversions, but each coach in the first XFL game only opted for one-point attempts.

Previous Galaxy Z Flip video leak shows a model headed to the US
Next A Thai soldier has killed at least 20 people in a shooting spree, authorities say. He may be at a mall