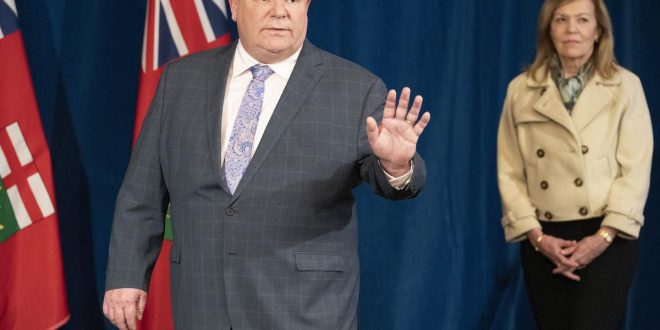 Armed with new data suggesting Ontario has hit its COVID-19 peak with fewer cases than feared, Premier Doug Ford is developing a “framework” for slowly reopening the economy.

The province is on track to have fewer than 20,000 cases in this first wave of the virus, thanks mostly to people staying home and engaging in physical distancing, according to computer modelling data released Monday.

“We did the right thing, we listened to the experts and, thanks to all of you, we have so far avoided the worst-case scenario that we were all dreading,” Ford said as the COVID-19 case tally topped 12,000 with more than 600 deaths and confirmed infections continue to rise by about five per cent daily.

“We’re not out of the woods yet — far from it. We’re still in the middle of a battle,” Ford said.

The premier said he has asked the jobs and recovery committee headed by Finance Minister Rod Phillips to develop “strict criteria and key benchmarks that must be met before lifting or easing restrictions.”

Stressing such moves are still “weeks” away, Ford said the government would rely upon the advice of the chief medical officer of health before any reopening of the economy.

Ontario remains in a state of emergency until May 12 and only essential businesses such as supermarkets, pharmacies and liquor stores are allowed to be open, with restaurants limited to serving takeout meals.

“It’s very difficult to close down the economy. It’s twice as difficult to open it back up safely. I know people get anxious and rambunctious but, what, over waiting a few more weeks? I’d rather wait and be safe,” Ford said.

The new projections suggest the measures in place have kept the number of infections far below grim scenarios presented two weeks ago, when 80,000 cases were forecast and 300,000 was floated as a worst-case scenario for the number of people who could fall ill by the end of April.

Officials were concerned thousands of seriously ill people could potentially push hospitals to a breaking point.

“Our public health measures are working and we need to keep them working,” said Matthew Anderson, chief executive of Ontario Health, the agency in charge of the provincial health system.

Under the new modelling, it is difficult to predict a number of deaths, partly because of the rapid spread in nursing homes where mortality rates will be higher because the residents are older and vulnerable, said Steini Brown, dean of the Dalla Lana School of Public Health at the University of Toronto

The peak is a milestone because it suggests the number of cases should start going down, and also allows public health officials to consider how and when to reschedule elective surgeries and medical treatments that have been postponed.

Ontario has been spared the chaos of places like Italy and New York City, with plenty of health care capacity remaining given that there are 802 coronavirus patients in hospital, with 249 in intensive care and 193 of them on ventilators.

The statistics on patients in ICU are “trending better than our best-case scenario,” said Anderson.

When the first computer modelling was released April 3, officials warned the death toll could reach 1,600 by the end of April, or be as low as 200 with strong public health measures limiting the number of cases to 12,500 — a mark the province has now effectively reached. At the time, Ontario had experienced 100 deaths and 3,500 cases.

“The peak can last a bit and we don’t want it to start going back up again,” she said.

“Everyone needs to continue to stay home as much as possible. You need to stay the course and stay strong to save lives … to keep this terrible infection from spreading more.”

Any measures to open up the economy will be have to be “very gradual” to make sure spread of the virus is not reignited, something that will take a couple of weeks to measure given the 14-day incubation period, Yaffe added.

Robert Benzie is the Star’s Queen’s Park bureau chief and a reporter covering Ontario politics. Follow him on Twitter: @robertbenzie