The Anti-Politics of Terrorism 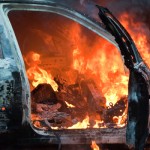 By JANE DUNCAN Terrorism In the wake of the recent attacks in Sydney, Paris and Baga, it’s a word that’s been on many people’s lips. After the Charlie Hebdo attack in Paris, some have argued vehemently against trying to explain the context in which terrorism arises as an attempt to be ‘soft’ on terrorism. Terrorism Versus Criminality Yet at the ... END_OF_DOCUMENT_TOKEN_TO_BE_REPLACED