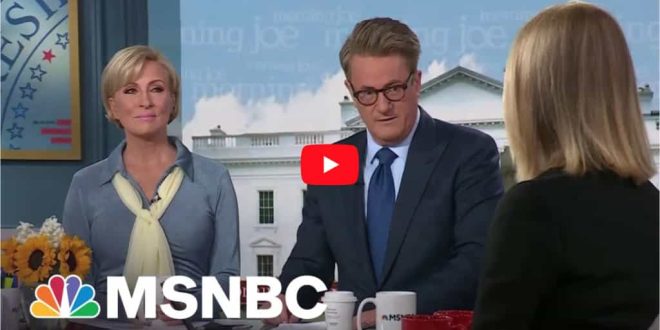 We continue to see support for Ukraine from some countries with recent traditions of staying out of international conflicts.

In a rare move, Japan is sending bullet-proof vests and other military supplies to Ukraine. The country is not sending weapons because of a self-imposed ban, but providing military equipment is a sign the country is in line with its Western allies. Japan has also said it will take in refugees, which really is an extraordinary move.

Yeah, Katty Kay, can we stop there for one second?

Actually, this reminds me of those weeks in 1989 when one country after the other fell, the Soviet-backed country fell.

I don’t think we can explain to maybe younger people that are watching what a radical departure it is for Germany, which has been haunted by Naziism since 1945, Germany moving now aggressively to build their military.

It is going to be larger, they’re going to spend more money on their military than Russia does now.

Japan’s constitution is a passivist constitution. It is written into law that it doesn’t get involved in the military because of what happened in World War II.

In the 1960s and ’70s, there were a lot of countries in Europe and around the world that would have been horrified at Germany expanding its military budget. The last thing we wanted was more of a military Germany.

In 1989 when Western and East Germany broke the French were incensed. Mika and I were at an event where they were honoring George H.W. Bush, Bush 41 and the Germans were there. Helmet Cole was there thanking George H.W. Bush saying, without you Germany would never be united. In 1989 Europe did not want a United Germany because they were fearful, they were nervous.

Many of the scenes we have been seeing from Ukraine have brought back post-traumatic stress disorder (PTSD), the scenes of people trying to flee by train, of playing music in underground bunkers like they did during the blitz. If this European robustness and unity we have seen over the last week, in the last ten days, if it holds we are moving from a bipolar world potentially to a tripolar world.

They have spending power, they have a military budget, it could change the power play. We dismissed the Europeans on the right too often. Don Rumsfeld called them chocolate makers, the chocolate makers of Europe. You have Trump and Trumpists so dismissive of Europe. But you keep looking at the gross domestic product (GDP). The United States, over $20 trillion. The EU, over $20 trillion.

Share
Previous Gangsters on the Loose – Ukraine
Next Climate Action, Fossil Fuel & the War on Ukraine