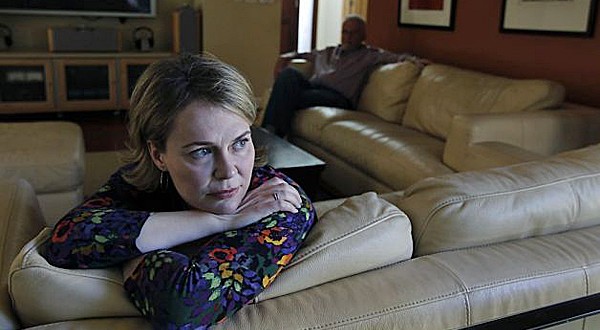 New Clinical Case Definition for ME/CFS: Fears It Will Be Labeled “Behavioral Health”

A new clinical case definition and diagnostic criteria for myalgic encephalomyelitis/chronic fatigue syndrome (ME/CFS) will be announced by the US Institute of Medicine (IOM) tomorrow, six weeks earlier than its due date, March 22. Fears are, because the National Institute of Health (NIH) insisted on including behavioral health specialists on the IOM ME/CFS committee, that the new labels and criteria will endorse a body of study that says the conditions are primarily psychological or psychiatric.

Those who have opposed the controversial health research plan since it was launched more than a year ago believe its early release is “a desperate attempt to put a lid on future opposition.”

Jeannette Burmeister (above), an attorney disabled by the disease for nearly a decade, said today that the IOM’s claim to be an objective, independent institution appeared to be “a PR stunt,” since the IOM had bowed to pressure from the NIH to include psychologists on their panel.

The IOM obliged without even an iota of resistance. Jeannette Burmeister

One of the behavioral health specialists, Margarita Alegría, from Harvard Medical School’s Center for Multicultural Mental Health Research, co-authored a paper in 2011 that classifies CFS as a neurasthenia spectrum disorder – which is psychiatric in nature.

In the paper, they say that “Neurasthenia is a prevalent condition deserving further research attention given its comorbidity with other psychiatric disorders and its association with functional impairment.” But there is a lot more.

Burmeister drew a parallel with speakers who had previously addressed the IOM about Gulf War Illness, a disease that the IOM had previously renamed chronic multisymptom illness (CMI), and who expressed the view “that the illness may be psychiatric” even though there is strong evidence that science discredited this a long time ago. In this instance, the US Department of Veterans Affairs (VA) had asked the IOM to develop a case definition for CMI. But after spending $850,000 on the task, in March last year the IOM committee announced it was “unable to develop a new consensus definition of CMI given the lack of uniform symptoms, the variety of symptoms, and the long onset and duration” of the perplexing disease. For this reason, two definitions – both existing – should continue to be used. One was a broad definition developed by the Centers for Disease Control and Prevention, and the other a more restrictive definition derived from a study of Kansas Gulf War veterans. However, the committee did decide that the disease name should be changed back to Gulf War Illness.

Kenneth Shine, chairman of the IOM Gulf War Illness committee had previously stated he “could not recall when the IOM was last charged with defining a disease.”

Even though the IOM had not been able to fulfill its mandate that time, it was tasked, yet again, with defining another highly controversial and misunderstood disease, currently controversially labeled ME/CFS, which many believe should be diagnosed separately because ME and CFS are two completely different disease entities.

As Burmeister challenged in March last year: “A literature review by a majority of non-experts is as flawed a process as one can imagine for the definition of an overwhelmingly complex disease such as ME/CFS,” she said. “It cannot be done competently.”

“Expecting a different result from the IOM (than the one the institute delivered for Gulf War Illness) in the case of ME/CFS is the stuff Harry Potter books are made of (no offense to J K Rowling). Jeannette Burmeister

The world will know tomorrow. But in the meantime Burmeister has also questioned the money spent on the ME/CFS study, which was commissioned by the US Department of Health and Human Services (HHS) for a whopping $1-miilion in 2013.

What the Advocates Are Calling For

While the American public is forced to fund controversial IOM studies, the advocates, health professionals (including researchers and clinicians) and patients, simply want to adopt a set of criteria that is already in use in internationally. Initiated in  Canada, and known as the Canadian Consensus Criteria (CCC), these contain both a research and clinical case definition for ME and CFS. This was published in a peer-reviewed journal in 2003, and incorporates what was at the time, the most up-to-date scientific knowledge available worldwide.

Furthermore, the CCC was endorsed in the Primer for Clinical Practitioners that is published by the International Association of Chronic Fatigue Syndrome/Myalgic Encephalomyelitis (IACFSME). This was the major professional international organization that was concerned with both research and the care of ME/CFS patients. But even this is outdated as the 2011 ME International Consensus Criteria shows. Now there is also an ME IC Primer based on the ME ICC which has even more credence.

From the moment the IOM committee started its ME/CFS study, experts and patients closed ranks in a determined attempt to stop the research plan. More than 6,000 people signed an Avaaz petition to cancel the HHS/IOM contract and a group of experts sent a strongly worded letter to the US secretary of the HHS, Kathleen Sebelius, urging her to adopt the CCC for ME/CFS.

A main complaint was that sufferers have been left with no real biomedical research or effective treatments for decades, and by trying to redefine the illness, they just were prolonging time.

The letter, signed by 38 highly qualified US professionals (many of whom are doctors and specialists) and 12 equally qualified international professionals, urged the HHS to use the CCC as the only case definition and to abandon its mission to get bodies like the IOM “that lack the needed expertise to develop ‘clinical diagnostic criteria’ for ME/CFS” to basically reinvent the wheel.

Not only was the HHS wasting taxpayers money, but it was threatening to “move ME/CFS science backward by engaging non-experts in the development of a case definition for a complex disease about which they are not knowledgeable.”

It was threatening to move ME/CFS science backward by engaging non-experts in the development of a case definition for a complex disease about which they are not knowledgeable.”Experts’ open letter to the US secretary of HHS, September 2013

As the expert letter stated: “The expert biomedical community will continue to refine and update the case definition as scientific knowledge advances; for example, this may include consideration of the 2011 ME International Consensus Criteria (Carruthers et al, Journal of Internal Medicine, 2011). As leading researchers and clinicians in the field, however, we are in agreement that there is sufficient evidence and experience to adopt the CCC now for research and clinical purposes, and that failure to do so will significantly impede research and harm patient care.”

Meanwhile Jeannette Burmeister declared she would wage war on legal territory that she knows so well. At the IOM’s first open committee meeting in late January last year, she told all those present that the HHS had broken federal law in terms of the Freedom of Information Act (FOIA) and was filing a lawsuit against them and the NIH in a US district court. She also stated publicly that the HHS has issued misleading statements that related to the terms and nature of the controversial contract.

In September she announced that the US District Court for the Northern District of California had ruled that both government departments had violated the FOI  by refusing to supply her with certain documents. The Court denied the government request to dismiss her lawsuit and ruled that they must produce all the required documents within 60 days. The were also ordered to pay legal costs for the attorney who acted on her behalf.

Let’s hope that the Court’s ruling will be a wake-up call for the government and a reminder that it is not above the law. Jeanette Burmeister

Penny Swift is an experienced journalist who has worked on daily and Sunday newspapers in several parts of the world. Her specialties include news, investigative writing, consumer, health, and medical spheres. She has written more than 40 non-fiction books mostly about construction and home-related topics, as well as decorating and landscaping.
Previous The Anti-Politics of Terrorism
Next CFS Is Not a Psychological Illness or Exercise Phobia