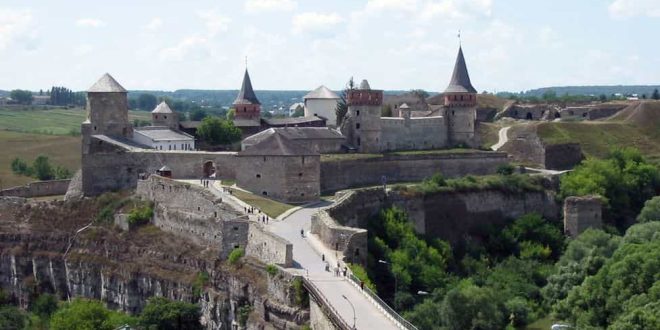 The Ukraine town of Kamianets-Podilskyi was founded by Kievan Rus

Thanks to the BBC for posting a historical timeline of the historic events in Ukraine from the 9th Century up to 2020. Even with my Polish roots, I had no idea of the turbid history that Ukraine has been through.

A Chronology of Key Events:

9th century – Founding of Kievan Rus, the first major Eastern Slavonic state. The traditional account, a matter of debate among historians, attributes its founding to the semi-legendary Viking (or Varangian) leader Oleg, ruler of Novgorod, who went on to seize Kyiv which, owing to its strategic location on the Dnieper River, became the capital of Kievan Rus.

10th century – Rurik dynasty was established, and the rule of Prince Vladimir the Great (Prince Volodymyr in Ukrainian) heralds the start of a golden age. In 988 he accepts Orthodox Christianity and begins the conversion of Kievan Rus, thus setting the course for Christianity in the east.

1237-40 – Mongols invade the Rus principalities, destroying many cities and ending Kievan Rus’s power. The Tatars, as the Mongol invaders became known, establish the empire of the Golden Horde.

1349-1430 – Poland and later the Polish-Lithuanian Commonwealth gradually annex most of what is now western and northern Ukraine.

1441 – Crimean Khanate breaks free of the Golden Horde and conquers most of modern southern Ukraine.

1596 – Poland establishes Greek-Catholic or Uniate Church, in union with Rome, which comes to predominate in western Ukraine. The rest of Ukraine remains overwhelmingly Orthodox.

1648-1657– Cossack uprising against Polish rule establishes Hetmanate, regarded in Ukraine as the forerunner of the modern independent state.

1654 – Treaty of Pereyaslavl begins the process of transforming Hetmanate into a vassal of Russia.

1686 – Treaty of Eternal Peace between Russia and Poland ends 37 years of war with the Ottoman Empire in what is now Ukraine, and partitions the Hetmanate.

1708-09 – Mazepa uprising attempts to free the eastern Hetmanate from Russian rule, during the prolonged Great Northern War that ranged Russia against Poland and Sweden at the time.

1764 – Russia abolishes the eastern Hetmanate and establishes the Little Russia governorate as a transitional entity until the full annexation of the territory in 1781.

1772-1795 – Most of western Ukraine is absorbed into the Russian Empire through the partitions of Poland.

1783 – Russia takes over southern Ukraine through the annexation of the Crimean Khanate.

19th century – National cultural reawakening sees the development of Ukrainian literature, education, and historical research. Habsburg-run Galicia, acquired during the partitions of Poland, becomes a center for Ukrainian political and cultural activity, as Russia bans the use of the Ukrainian language on its own territory.

1917 – Central Rada council was set up in Kyiv following the collapse of the Russian Empire.

1918 – Ukraine declares independence. Numerous rival governments vie for control of some or all of Ukraine during the ensuing civil war.

1920s – The Soviet government encourages the Ukrainian language and culture within strict political bounds, although this process is reversed in the 1930s.

1932 – Millions die in a man-made famine during Stalin’s collectivization campaign, known in Ukraine as the Holodomor.

1939 – Western Ukraine is annexed by the Soviet Union under the terms of the Nazi-Soviet Pact.

1941 – Ukraine suffers terrible wartime devastation as Nazis occupy the country until 1944.
More than five million Ukrainians died fighting Nazi Germany. Most of Ukraine’s 1.5 million Jews are killed by the Nazis.

1954 – In a surprise move, Soviet leader Nikita Khrushchev transfers the Crimean peninsula to Ukraine. Armed resistance to Soviet rule ended with the capture of the last commander of the Ukrainian Insurgent Army.

1960s – Increase in covert opposition to Soviet rule, leading to repression of dissidents in 1972.

1986 – A reactor at the Chernobyl nuclear power station explodes, sending a radioactive plume across Europe. Desperate efforts are made to contain the damaged reactor within a huge concrete cover.

1990s – About 250,000 Crimean Tatars and their descendants return to Crimea following the collapse of the Soviet Union.

1994 – Presidential elections: Leonid Kuchma succeeds Leonid Kravchuk, conducts a policy of balancing overtures to the West and alliance with Russia.

1996 – New, democratic constitution was adopted, and hryvnya currency was introduced.

2000 – Chernobyl nuclear power plant is shut down, 14 years after the accident. Well over ten thousand people died as a direct result of the explosion, and the health of millions more was affected.

2006 July – Socialist Party abandons Orange Revolution allies to form a coalition with Viktor Yanukovych’s Party of Regions and the Communists.

2008 October – Global financial crisis leads to a decline in demand for steel, causing the price of one of the country’s main exports to collapse. The value of the Ukrainian currency falls sharply and investors pull out.

2010 February – Viktor Yanukovych is declared the winner of the second round of the presidential election.

2011 October – A court jails former Yulia Tymoshenko for abuse of power over a gas deal with Russia in 2009.

2013 November – Tens of thousands of protesters take to the streets to protest at the government’s sudden decision to abandon plans to sign an association agreement with the EU, blaming Russian pressure.

2014 May – Leading businessman Petro Poroshenko wins the presidential election on a pro-Western platform.

2014 July – Pro-Russian forces shoot down a Malaysian airliner over eastern Ukraine conflict zone, killing all 298 people on board.

2015 February – Germany and France broker a new Donbas deal at talks in Belarus, resulting in a tenuous ceasefire.

2016 – The economy returns to fragile growth after two years of turmoil.

2017 July – Ukraine’s association agreement with the European Union is ratified by all signatories and comes into force on 1 September.

2018 October – The Ecumenical Patriarch of Constantinople agrees to allow Ukraine to set up it’s own Orthodox Church independent of Russian ecclesiastical supervision.

2019 April-July – Television comedian Volodymyr Zelensky wins presidential election run-off in a landslide victory over incumbent Petro Poroshenko.
He takes office in May, and his Servant of the People party wins early parliamentary elections in July.

2019 September – Russia and Ukraine swap prisoners captured in the wake of Moscow’s seizure of Crimea and intervention in the Donbas.

Thanks to the BBC for the basis for this timeline.