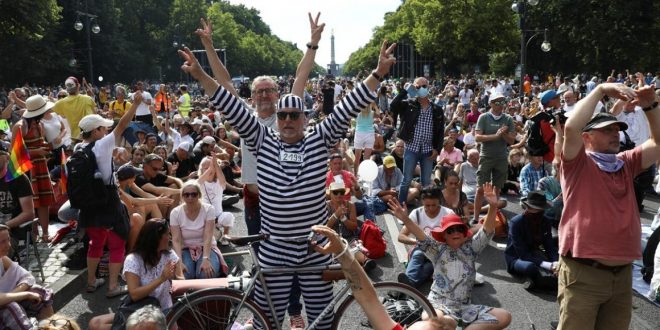 Demonstrators gesture during a protest against the government's restrictions amid the COVID-19 outbreak, in Berlin.Photo credit: Reuters

Almost 18 million people have been reported to be infected by the novel coronavirus globally, and 685,000 have now died.

Here are the latest developments from around the world.

Ireland’s chief medical officer on Saturday described a recent spike in COVID-19 infections as “concerning”, as the average number of cases per day doubled from around 20 in recent weeks to over 40 over the past five days.

Ireland, which still has lower infection rates than much of Europe, reported 45 new cases of COVID-19 on Saturday, down from a two-month high of 85 cases on Thursday.

“Over the last five days we have seen an average of 44 cases a day. This trend is clearly concerning,” Chief Medical Officer Ronan Glynn said.

Thousands marched in Berlin on Saturday to protest against measures imposed in Germany to stem the coronavirus pandemic, saying they violated people’s rights and freedoms.

The gathering, estimated by police at 17,000, included libertarians, constitutional loyalists and anti-vaccination activists. There was also a small far-right presence with some marchers carrying Germany’s black, white and red imperial flag.

Protesters danced and sang ‘We are free people!’ to the tune of rock band Queen’s ‘We Will Rock You’. Others marched with placards saying ‘We are making a noise because you are stealing our freedom!’ and ‘Do think! Don’t wear a mask!’.

Russia’s health minister is preparing a mass vaccination campaign against the coronavirus for October, local news agencies reported on Saturday, after a vaccine completed clinical trials.

British Prime Minister Boris Johnson said he would postpone the next stage of lockdown easing for at least two weeks due to a pick-up in infection rates.

US coronavirus deaths rose by over 25,000 in July and cases doubled in 19 states during the month, according to a Reuters tally, dealing a crushing blow to hopes of quickly reopening the economy.

The biggest increases in July were in Florida, with over 310,000 new cases, followed by California and Texas with about 260,000 each. All three states saw cases double in June.

The news that more states could be hard hit by the virus comes a day after the US reported that gross domestic product collapsed at a 32.9 percent annualised rate in the second quarter, the nation’s worst economic performance since the Great Depression.

Two major drug companies will supply the US government with 100 million doses of an experimental vaccine, the Trump administration said on Friday, as the nation’s top health agency predicted that fatalities would rise in the coming weeks.

Mexico surpassed Britain as the country with the third-highest coronavirus death toll on Friday, as the pandemic reaches new milestones in Latin America and threatens to disrupt efforts to reopen the region’s economies.

Vietnam’s coastal city of Danang plans to test its entire population of 1.1 million people for coronavirus infection, the governing authorities said on Saturday, as 40 new cases linked to the tourist hot spot were reported across the country, taking total infections to 586, with three deaths.

Philippines President Rodrigo Duterte on Saturday ordered his coronavirus task force to address the concerns of more than a million doctors and nurses who called for reviving strict lockdowns after a third day of record infections.

But the government cast doubt on the request of the frontline healthcare workers to revive strict lockdowns of the populous area in and around the capital Manila.

In the largest call yet from medical experts to contain the virus, 80 groups representing 80,000 doctors and a million nurses, said the Philippines was losing the fight against COVID-19 and warned of a collapse of the healthcare system from soaring infections without tighter controls.

Trade Secretary Ramon Lopez said the capital and nearby provinces cannot afford a return to lockdown, that people “need to manage and live with the virus, which is here to stay,” and that there are other ways to prevent its spread.

South Korean authorities arrested the founder of a secretive Christian sect at the centre of the country’s largest outbreak of COVID-19 infections on Saturday for allegedly hiding crucial information from contact-tracers and other offences.

Australia’s second most populous state, Victoria, reported 397 cases of the new coronavirus on Saturday, down by more than a third from Friday, but authorities said they are considering further restrictions as numbers remain worrisome.

Kuwait has banned until further notice commercial flights to 31 countries it regards as high risk due to the spread of the coronavirus, the Directorate General of Civil Aviation said on Saturday.

The countries include India, Pakistan, Egypt, the Philippines, Lebanon and Sri Lanka, which all have large numbers of expatriates in Kuwait. The list also includes China, Iran, Brazil, Mexico, Italy and Iraq.

Reports distinguish MIS-C, Kawasaki disease and severe COVID-19 in children | Photo Credits: Canva&nbsp New Delhi: So much has changed since the time the COVID-19 outbreak happened at the end of the year, 2019. The viral outbreak not just changed our normal lives as we knew it, new information about the virus also brought to…