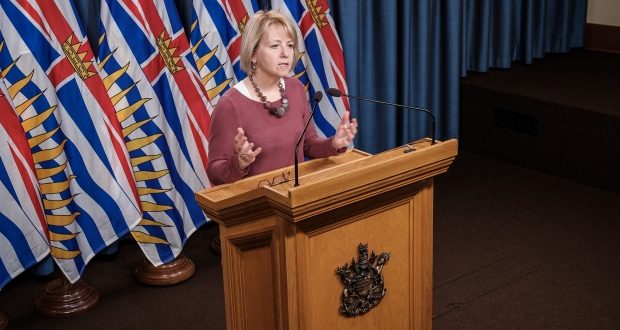 VANCOUVER —
Another five people have died from COVID-19 in British Columbia, and health officials are dealing with a cluster of new infections linked to an oilsands work camp in Alberta.

Provincial health officer Dr. Bonnie Henry announced the latest fatalities at her daily virus briefing on Monday, along with 52 new test-positive cases, that have been recorded since Saturday afternoon.

That brings the total number of confirmed COVID-19 infections recorded in B.C. since late January to 1,699. Of those, seven are now linked to one oilsands job site north of Fort McMurray.

Henry said officials have “come to understand that there has been transmission to people who have come back to B.C. associated with the Kearl Lake project.”

Officials said there are additional B.C. residents being monitored and tested, and that it’s possible workers carried the virus from the camp to other provinces as well.

Anyone who has come back from working at Kearl Lake must self-isolate for a period of 14 days beginning on the day they returned, Henry said.

Oilsands work has been deemed essential by the Alberta government.

Henry also encouraged workers whose family members have fallen ill with COVID-19 symptoms since they came home to call 811 for an assessment.

There was some positive news in Monday’s announcement as well, including that two previously announced outbreaks have been resolved. Dr. Henry said the Delta View long-term care home and the Okanagan Correctional Centre have both been cleared of COVID-19 for the time being.

“We’ve gone through the incubation period with no further cases being identified there,” she said.

Monday’s announcement also marks the third day in a row in which B.C. has seen fewer than 30 new cases. There were 29 on Saturday, 29 on Sunday and 23 on Monday.

In addition, there are now only 104 people in hospital due to COVID-19 – though 49 of them are in intensive care.

Health officials also announced there have been another 52 recoveries since Saturday, for a total of 1,039 so far, leaving 579 active cases in the province.

But Henry stressed once again the importance of people continuing to follow public health advice and respect the restrictions put in place to prevent the spread of the virus.

“The numbers are going down but we are not immune we are still having outbreaks in our communities across the province, we are having imported cases, we are having people who are passing it on to their family and friends,” she said.

“This virus is insidious. It can spread to others when you’re not even realizing that you’re sick yourself. So we can’t let our guard down yet.”