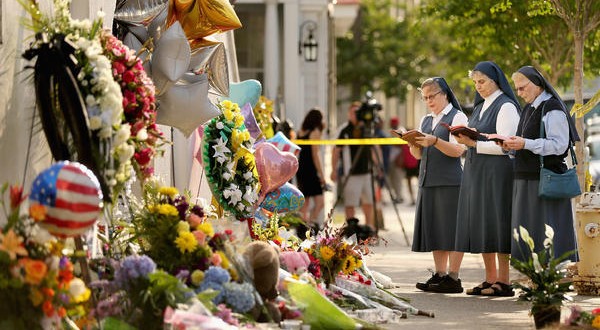 Since the 1920s Charleston has been the name of a dance; a dance with roots in Africa, and made white and famous on Broadway. Now Charleston is the name of a massacre, the murder of nine people and the desecration of the Emmanuel African Methodist Episcopal Church.

About Charleston and South Carolina

Charleston was founded as Charles Town in 1670 when Charles II of England granted land in Carolina to some of his supporters after he was restored to the throne.  The city, and its putative Southern gentility, was built on two great historical crimes – the genocide of the indigenous American people and the African slave trade.

The great liberal philosopher John Locke, an advocate of genocide and a man with personal investments in the African slave trade, wrote the Constitutions for North and South Carolina in 1669. They affirmed the rights of private (white) property over both the (indigenous) commons and (African) slaves. Locke is often described, quite rightly, as the “intellectual father” of the United States. Like other liberal thinkers he was appalled by slavery, which he described as “vile and miserable an estate of man,” only in so far as the people to be enslaved where among those considered to be fully human. Liberalism, from the beginning, was constituted around a racialized distinction between the civilized and the barbarian, the sacred and profane, those who are fully human and those who are less than human.

The racialization of the ancient distinction between the sacred and the profane and civilization and barbarism is older than liberalism. The year 1492 was an important moment in the development of this process. This was the year in which Isabella and Ferdinand, the Catholic Queen and King of Spain, expelled the Arabs and Jews from Spain and it became possible to imagine Europe as a project, as the locus of the scared, at first Christian and then white. It was also the year in which Christopher Columbus, sailing under the authority of Ferdinand, reached the Caribbean and inaugurated a period of European domination of the world built on the riches wrung from genocide and slavery in the Caribbean and the Americas.

The initial ideology legitimating the authority of European colonialism was rooted in a religion founded, in the Middle East, on a commitment to the universal.  Paul the Apostle, the primary figure in the development of Christianity as a religion, had insisted that the revelation of the divinity of Jesus was for all of humanity:  “Here there is no Gentile or Jew, circumcised or uncircumcised, barbarian, Scythian, slave or free, but Christ is all, and is in all.” This posed certain problems for the legitimation of the denial of the full and equal humanity of all people.

But just ten years after Columbus arrived in the new world Pope Nicholas V gave the rulers of Spain and Portugal the right to enslave pagans. In 1537 Pope Paul III, asked to rule on whether or not the indigenous inhabitants of the new world were fully human, declared that although they were human their souls were empty. This doctrine, anima nullius, was articulated to the idea that the lands of the new world were empty, terra nullius, and for the taking. The idea that there was a split between those who were fully human, and those who were not, would later be written into European philosophy, literature and then science.  It’s still evident in much of the Euro-American academy – including its often provincial iteration here in South Africa – as well as Hollywood, and, in its particularly crude forms, Fox News and The Daily Mail.

The Rise of Liberalism

The English Revolution of 1688 weakened the power of the monarchy and enabled the rise of liberalism – a political project in which, as Domenico Losurdo has shown, emancipation was imagined within the confines of a distinction between the sacred and the profane that rendered the colonised, ‘barbarians’ in the language of John Stuart Mill, the other great liberal philosopher, as less than fully human. As liberalism advanced slavery reached unprecedented levels of horror. The desecration of the lives of some was the basis for the emancipation of others. Neither the American Revolution of 1783 nor the French Revolution of 1789 took their grand declarations of the rights of man to apply to all. In 1787 the Constitution of the United States declared Africans to count for three fifths of a full (white) person.

The first great challenge to the division of humanity into a racialized conception of who was fully human and who was not was the revolution against slavery in Haiti which concluded in 1804. Toussaint L’ouverture, who led an army of African slaves to victory against the great European powers of the day, seized the Declaration of the Rights of Man in revolutionary Paris in 1791 to affirm a vision of universal freedom, a vision that was enforced with a military victory. Later on the army of former slaves, acting against L’Overture’s own wishes, smashed the plantation system for ever. But as the Haitian historian Michel-Rolph Trouillot noted in 1995 the great thinkers of Europe were so invested in the colonial ideology of a graduated humanity that, even after the defeat of the European armies, they simply were not able to grasp the political agency of enslaved Africans in Haiti. This, Trouillot noted, had continued to be a feature of the European academy, including its radical edge, for almost two centuries.

But while the Haitian revolution was incomprehensible, in the salons of Paris news of its triumph spread across the black world, largely via black sailors. It may have inspired the slave revolt in Cape Town in 1808. In 1822 Denmark Vesey and others planned a slave rebellion, which they called “the rising”, in the Emmanuel African Methodist Episcopal Church in Charleston. Their aim was to overwhelm their oppressors and escape to Haiti. They were betrayed and the church was burnt down. Twelve years later it was forced underground. It met in secret for more than 30 years.

Abraham Lincoln signed the Emancipation Proclamation in 1863 and by 1865 it held legal force across the whole of the United States. But rights in law are seldom rights in practice for oppressed people. “Equality” as Aimé Césaire would note in the context of the struggles for decolonisation in the Caribbean just under a century later, “refuses to remain abstract”. The practical realisation of rights granted in principle requires the material basis and political strength necessary to ensure equality.

Segregation, and a brutal backlash in the form of organised white terror that included ritualised mob killings of nearly 4 000 black people as grotesque performances of white power, a process that continued until 1968, secured ongoing white domination. This was not simply a matter of white mobs acting outside of the law. As W.E.B. Du Bois noted in 1903, the “police system was arranged to deal with blacks alone, and tacitly assumed that every white man was ipso facto a member of that police.”

In 1962 Martin Luther King, Jr came to the Emmanuel African Methodist Episcopal Church to speak to the struggle for full and equal civil rights. The victories that came out of the struggles of the 1960s, struggles that confronted serious and at times murderous opposition, faced their own backlash that came to centre around the systemic criminalisation of, in particular, young black men. There has been imprisonment on a vast scale and white men, in or out of uniform, have often been able to kill black men with impunity. In recent months and years names like Oscar Grant, Trayvon Martin, Eric Garner, Michael Brown, Walter Scott and Freddie Grey as well as places like Ferguson and Baltimore have come to stand, across the world, for of the evident fact that in contemporary America black lives continue to be accorded a lesser weight and value than those of white people.

The man who walked into the Emmanuel African Methodist Episcopal Church with a gun and murderous intent may well end up on death row. Now that there is a debate about taking down the Confederate Flag in South Carolina it is possible that Dylann Roof may not meet his fate under that sign of racial terror. But racial terror may very well still continue to be read as individual madness. The execution of Timothy McVeigh in 2011 didn’t result in any meaningful awareness that organised terror – terror with its own symbols, ideas, music and networks – can be and often is white, Christian and American.

Unlike, say, John Locke, #jesuischarliehebdo or the BBC, Rhodesia and the Klan are no longer credible points of reference for much of the ongoing conflation of full humanity with whiteness. People like Roof are invested in outmoded forms of white domination and are an embarrassment to its most powerful contemporary iterations. But the project continues with an evolving symbolic economy and set of organisational forms. One only has to look to policing and prisons in the United States, to what has been done by the United States to Haiti, Palestine and Iraq, or, closer to home, to the deep structure of our own society, the relentless catalogue of white abuse, as well as Operation Fiela, to see that the historical sequence inaugurated in 1492 is not yet over. It’s not over in the United States. It’s not over in South Africa. It won’t be over until the material basis for inequality, in terms of the exercise of economic and political power, is undone. It won’t be over for as long as liberalism is misread as a project of universal emancipation.