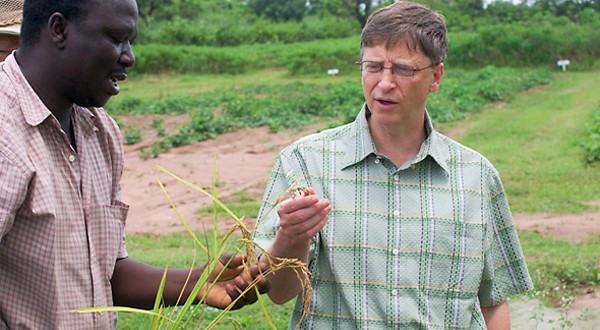 Everyone seems to have an interest in food policy these days, from the Bill and Melinda Gates Foundation with its Alliance for a Green Revolution in Africa, to the G8 with its New Alliance for Food Security and Nutrition, to social movements, civil society networks and those who simply care about what they eat. Of course, some voices are more powerful than others. It is for this reason that movements of peasants and other small-scale food providers from around the world decided to amplify their voices in the midst of an onslaught of neoliberal policies by forming the transnational agrarian movement La Via Campesina in 1993, coining what we’ve come to know as “food sovereignty.”

Today, the concept of “food sovereignty” is broadly defined as “the rights of peoples to healthy and culturally appropriate food produced through ecologically sound and sustainable methods and their right to define their own food and agriculture systems.” Food sovereignty has since served as an alternative paradigm to the current global “food security” narrative. However, it is “food security” that is on everyone’s lips. Governments are concerned to ensure it, international organizations like the United Nations Food and Agriculture Organisation (FAO) are keen to measure and promote it.

According to an Oxfam report, currently there are approximately 14 million people in South Africa who experience hunger and 1.5 million children under the age of six who are stunted by chronic malnutrition.

Rather than problematizing food and its distribution, food security policy and planning in South Africa is dominated by discourses of scarcity and production. The trouble with the way that food scarcity is operationalized in various policy documents such as the National Development Plan (NDP) and the now forsaken Integrated Food Security Strategy (IFSS) is that it tends to obscure the uneven relationships that underlie the persistence and deepening of hunger and malnutrition, past, present and future.

South Africa has recently developed a national Food and Nutrition Security Policy. Gazetted in August 2014, and led by the Departments of Agriculture, Forestry and Fisheries (DAFF) and Social Development (DSD), the policy has been drafted under a veil of secrecy and contains little credible vision for a nourishing food system for all. It must be understood that food is where many issues converge – inequality, climate change, globalisation, hunger, commodity speculation, urbanisation, health and so on.

Constitutionally speaking, “access” to food is not sufficient; people also need access to productive resources and most importantly, to power that enables them to challenge existing social and economic relations: establishing an alternative development path rooted in the notion of food sovereignty.

Availability and access to food incorporates both production and distribution systems, including the market as a mechanism for distribution and identification of demand. At present, food insecurity is characterised by some people not having enough food rather than there not being enough. In a capitalist market economy the flow of food is away from areas of food insecurity and towards areas of effective demand – a case in point being the bread price fixing scandal, which struck a blow to the poorest of South Africans.

Put another way, a focus on scarcity as the cause of hunger and malnutrition today and of food crises in the future tends to conceal the generalised and on-going crises of industrial capitalist agriculture and its uneven development model.

First introduced at the 1974 World Food Congress, emerging at a time of rising energy costs, turmoil in global grain markets and increasing levels of hunger – the concept of “food security” has since succumbed to the free market order that has characterised the post-Cold War period, bringing about a shift in the discourse. By the 1996, World Food Summit the concept had been relegated to individual and household food access, supplied through trade and markets, rather than through state-governed production and distribution. Regrettably, the 1996 narrative continues to dominate the right to food discourse to this day.

Food security exists when all people, at all times, have physical and economic access to sufficient, safe and nutritious food to meet their dietary needs and food preferences for an active and healthy lifestyle.

There is no question that this is a laudable goal. There are questions, however, about the ways in which this broad definition is operationalized and measured. For instance, what does food security policy address, what does it ignore and what does it conceal?

In his book, Reclaiming Food Security, Michael Carolan describes the problem as a decades long challenge where food security has been framed as a question of agricultural productivity, food calories and free trade. But as the promise of genuine food security through neoliberal reform has gone unfulfilled, a growing chorus of scholars, civil society organisations and social movements are critical of food security as a concept and a set of policies. They argue that because it says nothing about where food comes from or how and under what conditions it is produced and consumed, food security offers little in the way of alleviating hunger, and even less for the contradictions of hunger and malnourishment in the global agri-food system.

While the right to food discourse enjoys significant protection at the international, regional and national level, such protection has not been translated adequately into the enjoyment of the right to food in individual countries, including South Africa. Food production has undergone massive commodification, with a shift away from control by small-scale farmers towards international food conglomerates and powerful corporations, coupled with the rise of massive food retailers, genetically modified seed monopolies and fast food chains.

As the world shifts from the Millennium Development Goals towards Sustainable Development Goals, development economist, Sakiko Fukuda-Parr argues that South Africa has missed the opportunity to take the lead in the global food discourse, despite being one of just 20 countries in the world with a constitution that recognizes a justiciable right to food.

The proposed food policy shies away from confronting capital interests within the food value-chain. Apart from acknowledging that the emerging agricultural sector is in need of assistance, the policy is silent on the influence of big-business in the food system. Cognisance must be taken that business too, has obligations to respect, protect and in the case of violations provide remedies for the realisation of human rights. With a National Assembly on Food Sovereignty being hosted by the Co-operative and Policy Alternative Centre this very weekend, it is time to rally around the call for Food Sovereignty.

Moyo is an Advocacy and Campaigns Officer with the Studies in Poverty and Inequality Institute (SPII). SPII is part of a network of civil society organisations promoting the realisation of the right to food in South Africa.
Previous Laughing President: The Real Reason Jacob Zuma Can’t Stop Smiling
Next Land, Dignity & Democracy: South Africa’s Constitution Does Allow for Expropriation