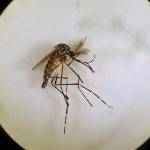 A scientific trial aiming to eradicate deadly disease-spreading mosquitoes has successfully reduced their numbers by 80 percent, according to a news release issued by the Commonwealth Scientific and Industrial Research Organisation (CSIRO), an independent Australian federal government agency responsible for scientific research. Heralded as a landmark trial, it involved an international partnership between scientists at Verily and James Cook University and ... END_OF_DOCUMENT_TOKEN_TO_BE_REPLACED