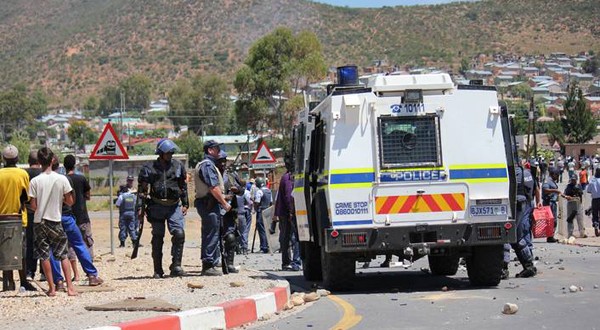 In the broader scheme of things, how significant are the recent wave of protests that have engulfed South Africa over the past decade? Are they another means of pressurising the ruling African National Congress (ANC) into delivering better services, or do they represent a new form of anti-systemic politics that promises to change how society is organised, and for the better?

Scholars are divided on this issue. On the one hand, the South African Research Chair in Social Change – currently held by Peter Alexander – has argued that the protests are of such a scale and intensity that they represent a broader “rebellion of the poor.” In other words, potentially or actually, these protests constitute challenges to the state, neoliberalism, or even capitalism, which means that their political significance as forces for transformation are great.

One the other hand, others such as Susan Booysen and Ebrahim Fakir have understood South Africa’s recent protests as being a means of calling the ANC to account, while remaining supportive of its broad political direction and the existing social order more generally. In terms of this view, the protests have limited transformative ambitions, and do not herald significant political shifts away from the ANC.

Who is right and who is wrong?

While it is difficult, and perhaps dangerous, to generalise about the characters and motivations of the protests, some general points can nevertheless still be made.

Until recently, in the smaller towns and rural areas, the ANC alliance has dominated the protest space, especially the Congress of South African Trade Unions (Cosatu) and its affiliate unions. Politics in the bigger cities is much more diverse, and this reflects in the diversity of voices out on the streets; nevertheless, industrial protests have dominated, and these have been led overwhelmingly by Cosatu.

Protests peaked at different times in various places, but in several municipalities, they peaked between 2010 and 2012. This suggests that the protests were responses to the global recession and its knock-on effects on South Africa.

However, after 2011 – the year of the local government elections – this picture began to change. Increasingly, wards began to protest in their own names, and a range of concerned citizens’ groups, independent unions and workers’ associations sprang into being.

Significantly, this political development took place organically, and at roughly the same time in different areas: no national organisation was going around the country, promoting new local organisations and co-ordinating protests.

Largely, the protests voiced localised demands about poor service delivery, corrupt and unpopular councillors, crime and a host of other issues. There was little evidence of these demands being politicised, by being linked to broader failures of neoliberalised capitalism; but the key point is that the protests have the potential to.

Just because protest organisers do not articulate their demands as being against neoliberalism and capitalism, does not mean that they are not reacting to their effects. In fact, the systemic nature of these demands may well become articulated more fully in time to come.

All it needs is a national organisation to go around the country and organise these new formations, and this transformative potential could well be realised. In fact, the political space is wide open.

However, it remains to be seen if the Economic Freedom Fighters (EFF) or the United Front (UF) rise to this historic challenge. Already, more politically conscious activists in different areas are generalising localised demands, and shifting them in an anti-systemic direction; but these efforts are sporadic and not sustained effectively by a national organisation.

Even more significantly, South Africa’s protests could and should be viewed as part of a broader protest wave, spread across various regions of the world and lasting well over a decade. In fact, the long wave of protests against the effects of neoliberalism began with the rebellions in Chiapas, and incorporates protest movements as diverse as the Occupy movement and other anti-austerity movements, the protests in the Middle East and North Africa, and the rise of parties such as Syriza (itself struggling with the contradictions of being a party of government) and Podemos.

Undoubtedly, this wave has had peaks and troughs. The political revolution in Egypt was smashed before it had the opportunity to deepen into a social revolution. The Occupy Movement could not sustain itself, but its activists continue to apply their learnings to new struggles.

However, if a longer range view of these events is taken, it becomes apparent that these protests are enduring. This means that they are capable of being sustained and even escalated into insurrections. But this is much more likely to occur if societies manifest elements of what Antonio Gramsci has called an organic crisis.

For Gramsci, crises become organic when popular capacity for action increases. More people become detached from the “hegemonic bloc”, and side with the oppressed and exploited. In addition, the ruling class cannot offer reforms very easily. Yet they also cannot repress very easily as the political costs of doing so may be too high. So they can move neither forwards nor backwards.

These elements are manifesting themselves in more countries, South Africa included. In fact, as Alexander pointed out recently at a conference on alternative futures and popular protest, with its high rates of protest and record strike levels by global standards, South Africa is a weak link in the global capitalist chain. If the chain breaks, it will do so at its weakest links.

It is clear that popular capacity for action has increased in the wake of the global recession, and the still-festering disputes around the imposition of councillors during the 2011 local government elections added to the ferment. More people are becoming detached from the ruling hegemonic bloc, and the search for new political forms is on.

Effects of the Global Recession

The objective conditions created by the global recession have made it less possible for the more progressive elements in the ANC to offer meaningful reforms, and more of its leaders are subjectively committed to the country’s current growth path. Yet at the same time, the political costs of repression are mounting relative to the benefits. Both the EFF and the UF were formed in the wake of the Marikana, which also hastened the divisions in Cosatu. The most successful repression requires consent for that repression, and in South Africa, the social base for that consent is narrowing gradually.

There can be little doubt that there are elements in the state that are hell-bent on repressive responses to struggles. But the more historically aware security cluster members will probably know that repression is never a long-term solution to a social crisis.

They may remember that it took a mere three short years for Joseph Stalin’s legacy to be completely discredited. They may even be thinking about how Muammar Gaddafi ended his life, apparently while being sodomised with a stick, and asking themselves, “Is that how I want to be remembered?”

There are also signs that there are divisions in the political elite around resorting to repression: to this extent, the security cluster is not of one mind. The cluster cannot rely on the military to turn its guns on the people should insurrectionary protests occur, and the police are under pressure from the popular pushback against police violence. For these reasons, South Africa is unlikely to descend into full-blown repression; there are unlikely to be more Marikanas.

These divisions are important to recognise, as they mean that the security cluster is susceptible to political pressure. Applying the pressure requires well-crafted political strategies to sharpen the internal contradictions and erode the social base, which the securocrats derive their consent from.

When all these factors are considered, the importance and potentially system-changing nature of South Africa’s protests, locally and globally, becomes self-evident. This means that, no matter how bleak the current period may seem, it is also pregnant with great promise.

This article was originally published by The South African Civil Society Information Service, a nonprofit news agency promoting social justice. It draws on the author’s research on the right to protest in South Africa, funded by the Open Society Foundation for South Africa, and which is being prepared for publication.

Jane Duncan is a Professor of Journalism at the University of Johannesburg. Before that she was Highway Africa Chair of Media and Information Society, School of Journalism and Media Studies at Rhodes University. Jane is a prominent media activist and former executive director of the Freedom of Expression Institute. She has three post-graduate degrees, and has written widely on media policy and media freedom issues.
Previous Racism Down Under: Reclaiming Whiteness
Next Commissions of Inquiry or Omission?