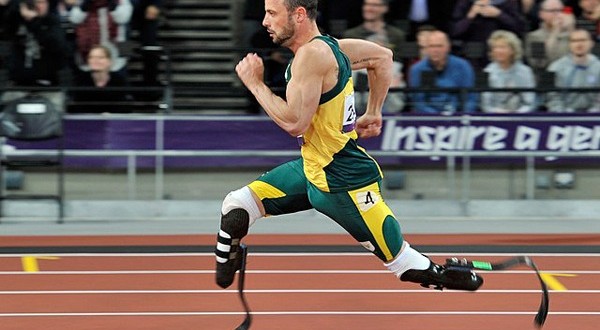 They Don’t Teach It In Law School

Notwithstanding the violent and aggressive behaviour he exhibited in his personal life, the product of a historically heavily subsidised racial group in South Africa, the life of Oscar Pistorius demonstrates how white privilege protected his masculinity from being constructed as uncivil, criminal, threatening and dangerous.

In a New York Times article, Michael Sokolove described Pistorius as a “great deal of fun,” but “more than a little crazy.” It is white privilege that ensured that Pistorius’ penchant for guns, excessive drinking and dangerous driving was not construed as transgressive behaviour.

Although a double amputee, Oscar Pistorius achieved what sociologists call hegemonic masculinity, a privileged male social status rarely achieved by disabled men. Pistorius had almost everything that white men are socialised to feel entitled to – prestige, fast cars, wealth and a blonde model on his arm. The Washington Post defined Pistorius’ trademark as his ability to transcend disability, and his “claim to fame, fortune and the attention of beautiful women, such as, model Reeva Steenkamp.”

Although Pistorius had to face accusations that his prosthetic legs gave him an unfair advantage over his competitors, these accusations did not significantly impact his public and financial status. It is reported that he earned more than one million dollars a year from endorsements.

Contrast the financial rewards that Pistorius received to the financial struggles of fellow South African athlete Caster Semenya. Like Pistorius, Semenya has had to deal with adversity. However, Semenya is not exactly an international media darling in the way that Pistorius was. Media reports show that after the International Amateur Athletics Federations (IAAF) conducted a gender test on Semenya without her knowledge in 2009, she struggled to find a sponsor even after the IAAF cleared her to run in 2010.

In an academic paper that compares Semenya to Pistorius, the authors, Amanda Watson, Heather Hillsburg and Lori Chambers, find Semenya significantly more accomplished than Pistorius on the track. Additionally, athletes who have similar track credentials to Semenya do not typically struggle to find sponsors, but often earn substantial salaries through endorsements.

Unlike Semenya, Pistorius earned millions of dollars from lucrative endorsement deals. It is reported that Pistorius wears ergonomically designed prosthesis that can cost as much as US$20, 000. In the world of disabled sports, Pistorius was in a class of his own.

According to sports media scholars, Paralympic Games are characterised by hierarchies of disability. Wheelchair athletes regard themselves as being at the top of the hierarchy, followed by amputees. Athletes with cerebral palsy are considered to be at the bottom of the hierarchy. Although Pistorius never considered himself disabled; and no other athlete received as much attention as him at the 2012 Paralympics.

It is unlikely that Pistorius’ fame has had any meaningful impact on the lives of many disabled black South Africans who live in poverty. Pistorius was born in a world of white supremacy – apartheid South Africa in 1986. He went to well-equipped schools, such as, Pretoria Boys’ High School, which also happens to be Edwin Cameron’s alma mater. This school has produced two Nobel Laureates and 18 Rhodes Scholars. One would be hard pressed to find disabled black persons with the kind of background that Pistorius has.

At the height of his sporting career, Pistorius publicly played his hegemonic white masculinity role impeccably. He presented himself as someone who possesses willpower and a great work ethic. This is in contrast to the stereotypical black athlete who is supposedly naturally gifted athletically but “irresponsible” and “lazy.”

Even after Pistorius was charged with murder, his defence relied on the construction of a white male figure who is “embattled and fearful” in a postcolonial nation plagued by violence, Watson, Hillsburg and Chambers contend. Henke Pistorius, Oscar Pistorius’ father, explained that white South Africans “owned guns because they could not rely on the police to protect them against criminals.”

The credibility of Oscar Pistorius’ legal defence relied on white angst about crime in post-apartheid South Africa, which interestingly enough became a source of unbearable discomfort for many whites after the demise of a white supremacist regime that whites had suckled from for almost five decades. However, when it comes to Oscar Pistorius we are encouraged to forget this history and instead focus on his sporting achievements.

Scholars of colour argue that one of the biggest lies that sport perpetuates is the notion that somehow sports can take us “out of our ethnicities.” It is from this perspective that I read the comment made by Sports Minister Fikile Mbalula that Pistorius would have been the perfect ambassador for the Unite 4 Mandela campaign. Mbalula is quoted as saying that “one of the ambassadors of such a campaign would have been Pistorius to unite us as a nation… a white Afrikaner boy who triumphed over adversity.”

Pistorius exploited the lie that sport perpetuates to the very end. Meanwhile, the lawyers for his prosecution are still trying to make sense of the fact that he got a slap on the wrist for fatally firing four shots at a human being. The truth of the matter is that Pistorius killed a white woman and subsequently, in his defence, appealed to white angst about crime, using mental images of the proverbial “native bogeyman” who he thought had finally come to get him in the early hours of 14 February 2013. There is no contradiction in that defence. What underpins that defence is the notion that white people are not killers. The assumption is that white men are inherently decent people who do not engage in domestic violence.

Perhaps, in law school, they don’t teach how white killers use white privilege to their advantage in the courts.

Mandisi Majavu, a PhD candidate at the University of Auckland, New Zealand, is the book review editor of Interface: A Journal For and About Social Movements. He is the co-editor of 'Visual Century: South African Art in Context Vol 4: 1990 - 2007' (Wits Press, 2011). Some of his work has appeared in the anthologies: 'Real Utopia: Participatory society for the 21st Century' (Ak Press, 2008) and 'Beyond Borders: Thinking critically about global studies (Worth Publishers, 2006).
Previous The Nigerian Synagogue Church of All Nations has Collapsed Before – VIDEO
Next How Pragmatism Drove China’s Economic Transformation