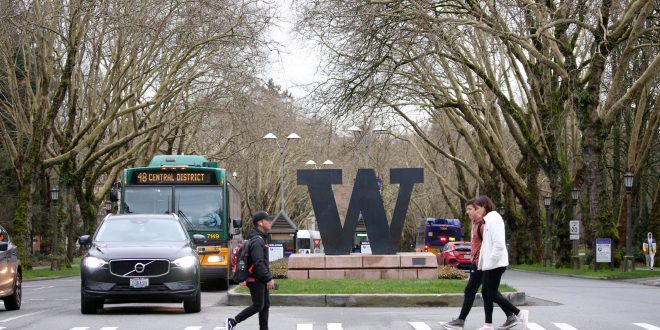 At least 121 University of Washington students, nearly all of whom are fraternity members, have tested positive for COVID-19, officials said Sunday.

A total of 213 people have tested positive for COVID-19, including students, staff, and faculty, raising concerns about the safety of students as the University of Washington prepares to reopen its campus for in-person instruction in the fall.

Dr. Geoffrey Gottlieb, chair of the UW Advisory Committee on Communicable Diseases, said in a statement that the cluster of cases in the fraternity houses was “concerning and reminds us that outbreaks can quickly spiral.”

Around 1,000 students have been living in 25 fraternity houses in a neighborhood north of the University of Washington campus, according to the university. The residents of the houses, including those who tested positive, those who had symptoms, and others who may have been exposed, were asked to quarantine or self-isolate.

A popup university testing site, set up earlier this week near Greek Row, had conducted nearly 1,300 tests as of the holiday weekend, the university said.

Gottlieb said that most of the houses had previously taken measures to reduce their resident capacity by up to 50% in summer in response to the pandemic, but added that those measures were not sufficient without “vigilant, daily preventive measures, such as wearing face coverings, physical distancing and hand hygiene.”

“What is occurring north of campus provides lessons for students as they consider their return to campus this fall,” Gottlieb said. “If everyone does their part to keep each other safe, we can continue to engage with one another and with our studies in the University environment… If we don’t, measures such as what are now required on Greek Row will be inevitable.”

The outbreak at the university raises concerns echoed by faculty members at other universities who have cautioned against reopening campuses for in-person classes in the fall semester amid the worsening coronavirus pandemic.

Nearly 800 faculty members at Georgia Tech have signed a letter saying the university’s plan to reopen for in-person classes in the fall — that does not include wearing masks as a requirement — “threatens the health, wellbeing and education of students, staff, and faculty.”

“We are alarmed to see the Board of Regents and the University System of Georgia mandating procedures that do not follow science-based evidence, increase the health risks to faculty, students, and staff, and interfere with the nimble decision-making necessary to prepare and respond to Covid-19 infection risk,” the letter said.

The faculty demanded that remote lessons should be the “default mode of instruction” for the fall semester and that the university should make wearing face masks mandatory everywhere on campus.

At least 146 faculty members at the University of Notre Dame have signed a letter saying that they should be allowed to make their own decisions about whether to teach in-person classes once the university reopens, as there were “numerous health-related reasons” for opting out of in-person teaching.

“The re-opening of the university has provoked considerable moral disagreement,” the letter said. “Those who conscientiously object to in-person classes should be allowed to teach their courses online.”

Even as campuses remain closed during the summer, students and staff at some universities tested positive for the virus.

On June 30, a 21-year-old Penn State student, Juan Garcia, died of COVID-19 after he first began to feel ill while living off campus in State College, the university said.

Last month, Mississippi health officials said a spike in coronavirus cases were tied to fraternity rush parties in Oxford where the University of Mississippi is. The fraternities were believed to have violated state guidelines that limit indoor gatherings to 20 people when social distancing can’t be enforced.

As of Friday, there were 54 confirmed cases of COVID-19 among Ole Miss employees and students. The university has announced a plan to reopen its campus for the fall semester of Aug. 24, which includes in-person courses.

At Clemson University, which also plans to hold in-person classes in the fall, at least 47 students and staff have tested positive for the virus, including 23 football players.

Previous Colleges are racing to create ‘a new sense of normalcy.’ Will new rules, COVID-19 testing be enough?
Next Financial scrutiny, back-to-work bonus among Conservative demands ahead of fiscal snapshot | CBC News