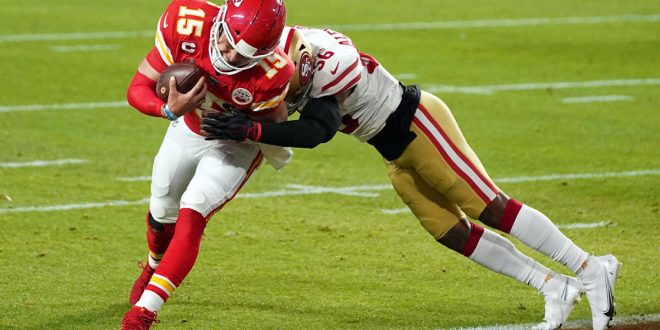 Halftime show done. Chiefs are the slight favorite on the live line, as they’re Pick -115 compared to the 49ers’ Pick -105. Live over/under is up to 47 points.

To RJ’s point, anyone who bet on love costing a thing just lost their bet.

Anybody that had the Yes on “Will Shakira’s hips lie?” has to be feeling pretty dumb right about now.

Deebo Samuel is the leading rusher and receiver for the 49ers (2 carries 39 yards, four catches 23 yards)

Sammy Watkins is the Chiefs’ leading receiver with 2 catches for 32 yards.

Re: Shanahan’s clock management, I co-sign everything Warren is saying here.

San Francisco stopped Kansas City on third down shortly after the two-minute warning, but made the strange decision not to use a timeout. The clock leaked down all the way to 59 seconds, and Jimmy Garoppolo and Co. took over on their own 20-yard line. The first play of the drive was a Raheem Mostert run which went for only three yards. The clock dripped down to 26 seconds, and the 49ers again ran the ball. After it became clear the 49ers were going to try to head to the halftime break with a 10-10 score, Andy Reid called a timeout with 20 seconds remaining. Garoppolo then hit Jeff Wilson Jr. for a 20-yard gain on third down, but the 49ers had just 14 seconds to work with near midfield. Garoppolo appeared to hit George Kittle for a 42-yard completion on the next play, but he was flagged for offensive pass interference. From there, Garoppolo just took a knee and both teams headed to the locker room tied at 10. Kyle Shanahan will probably be asked about that drive after this game, as the 49ers sliced and diced the Chiefs’ defense just minutes earlier. They had 59 seconds and three timeouts to work with.

The live line has this game as a pick ’em with the 49ers getting the ball first after halftime. The live total is set at 46.5 as well. You can also live bet the “Will there be overtime?” prop at some sites, and I’m seeing it at +575 on William Hill.

And with that, the Under on the first half cashes with only 20 points on the board. 49ers backers who got points also hit their bets.

Jimmy G just threw an absolute dime to George Kittle … but it was called back for what looks to be a VERY soft offensive pass interference call.

Jeff Wilson has now been thrown two passes in this game. He had five targets all regular season.

The 49ers tied the game at 10 apiece, but knew they had to stop Patrick Mahomes and Co. before halftime in order to keep that momentum. The Chiefs picked up three first downs on five plays, but then came the two-minute warning. The quick break in action appeared to hurt the Chiefs and help the 49ers. Mecole Hardman lost six yards on a reverse and then Kansas City was unable to convert on third and long. The 49ers did not call a timeout after the third down stop, and the clock leaked down all the way to just 59 seconds. Jimmy G now has a chance to reclaim the lead heading into the halftime break.

Pretty horrendous clock management from both coaches. Why KC wouldn’t use its timeouts to try to get Mahomes the ball again is beyond me.

Why are the Niners not calling timeout here? They have all three left and they’re letting extremely valuable time run off the clock.

The Chiefs seem to think they’ve found something with play-action out of 12 personnel (one back, two tight ends). Three nice gains out of it already on this drive.

The Chiefs extended their lead to seven points with a field goal after Jimmy Garoppolo’s interception, but the 49ers’ offense wasted no time getting those points back. Four of San Francisco’s next seven plays gained at least 11 yards — including Kyle Juszczyk’s 15-yard reception which ended in the 49ers’ first touchdown of the game. Deebo Samuel was a huge part of the quick, 80-yard drive, and he now has 62 yards of total offense.

With the game tied, the live line is right back where it was before the game, with the Chiefs favored by 1.5 points.