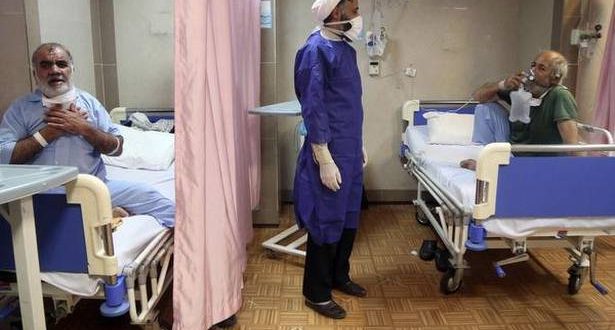 255 Indians have tested positive for COVID-19 in Iran, says government

In this Saturday, March 7, 2020, a cleric talks with a patient infected with the new coronavirus, at a hospital in Qom, 78 miles (125 kilometers) south of the capital Tehran, Iran.   | Photo Credit:
AP

A large group of pilgrims from Kargil, Kashmir and Ladakh are stranded in holy city of Qom

A total of 255 Indians have tested positive for COVID-19 in Iran, the government informed the Lok Sabha on Wednesday. Presenting India’s preparedness to fight the global pandemic, a written answer from the Minister of State for External Affairs V. Muraleedharan said the total number of Indians abroad infected with the virus stood at 276.

As per media reports, the 255 Indians were part of a large group of pilgrims from Kargil, Kashmir and Ladakh, who are stranded in the holy city of Qom after India cancelled flights to Iran.

Qom has emerged as the epicentre of the outbreak in Iran, which increased chances of infection among the pilgrims.

Also read: Efforts on to rescue 300 fishermen stranded in Iran | A complete list of travel advisories issued by the Union Health Ministry

The Hindu had reported that the members of the group had reached out pleading for help and medical attention from the Indian authorities. They alleged that they were not getting adequate official support from the Embassy of India in Tehran. They were without medicines and quarantine facilities, putting the uninfected members of the team at risk.

Iran’s hospitals they said were overrun with domestic patients and unable to get treatment from the hospitals in Qom.

The pilgrims have sought urgent evacuation to India, but New Delhi has declared that only the uninfected will be airlifted. As per unconfirmed reports, the Embassy of India is planning to provide medical assistance to the affected persons in Qom.

Previous Australian shares plunge 6.4% and AFL season to start as planned amid coronavirus – as it happened
Next Pandemics expert answers your coronavirus questions