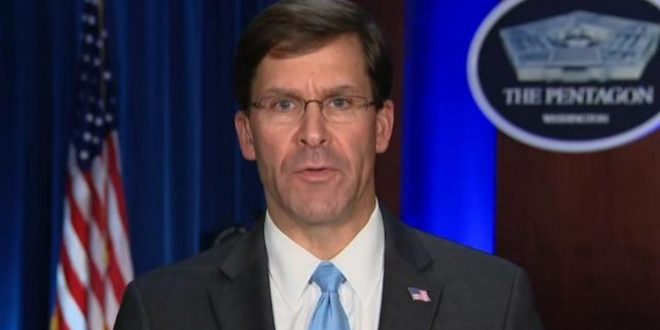 In an exclusive interview with the “CBS Evening News,” Secretary of Defense Mark Esper said governors will have the option of bringing in the National Guard to help enforce stay-at-home orders. Esper spoke to CBS News as more than 500 members of the military have tested positive for COVID-19, including at least 70 sailors on the USS Theodore Roosevelt.

Here are our top takeaways from the interview:

1.  Governors could use the National Guard to enforce stay-at-home orders

At least 270 million people across the country are under state-wide, county-wide or municipal stay-at-home orders to prevent the spread of the coronavirus. Esper did not rule out the possibility that the National Guard could be brought in to assist state governments in enforcing those directives.

“That would be an option for the governors,” Esper said. “Again, the Guard is active in all 50 states and territories. … I’m very proud of what our Guardsmen are doing, but we have a whole lot more capacity out there in the Guard right now to do more.”

2. “We are not at that point” of evacuating the USS Theodore Roosevelt

The commanding officer of the USS Theodore Roosevelt released a letter Tuesday pleading for help – at least 70 sailors on the ship have tested positive for COVID-19. Captain Brett Crozier said removing the majority of the more than 4,000 personnel on the aircraft carrier so that it could be sanitized is “a necessary risk.”

We asked Secretary Esper if it was time to evacuate the ship. He told us, “I don’t think we’re at that point.” Esper also said, “I am pleased to report that none of them are seriously ill.”

3. Where the Army Corps of Engineers is looking to build additional hospitals

This week, the Army Corps of Engineers opened a temporary hospital in New York City’s Javits Center. Secretary Esper told us they’re in the process of determining where the next temporary hospitals will be. “They’re looking at places such as Chicago, Dallas, New Orleans, other major cities where we see this cropping up,” he said. “We’re in very close contact with the states through both the Corps of Engineers through FEMA and I’ve talked to many governors myself to make sure that we are attuned to what their needs are.”

4.  Esper: “I am not” concerned about military readiness

Two aircraft carriers in the Asia-Pacific region now have confirmed cases of COVID-19 – in addition to the Roosevelt, the USS Ronald Reagan has cases as well. Secretary Esper said despite this, he is not concerned about military readiness in the region.

“We have more than two carriers in the inventory,” Esper told us. “We have a great alliance, network of allies and partners who work alongside us.”

5. There is no evidence of adversaries taking advantage of crisis

As the military is called in to assist in the country’s response to the coronavirus outbreak, Esper says he has not seen any evidence that foreign adversaries are taking advantage of the situation. “We find, tend to find right now that a lot of countries have turned inward and are focusing inward,” he told us.

“That doesn’t mean we should be less vigilant – if anything, we’re calling upon our armed forces deployed abroad … to make sure they remain vigilant and safeguard the country while we find ourselves turned inward right now to deal with this pandemic.”