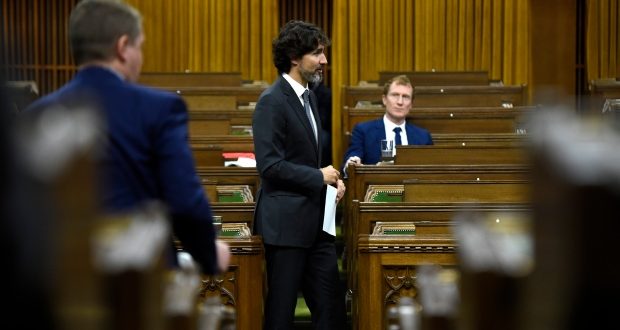 OTTAWA —
Wednesday’s emergency sitting of the House of Commons came to an abrupt halt within minutes after the government couldn’t secure the opposition support it needed to move forward on debate on its latest emergency piece of COVID-19 legislation.

Ahead of the sitting the federal Liberals were bracing for the opposition parties to reject their proposal to fast-track the bill, which proposed a series of changes to the Canada Emergency Benefit Program, including tough new measures to penalize fraudulent claims.

After tabling the legislation—titled Bill C-17, An Act respecting additional COVID-19 measures—Government House Leader Pablo Rodriguez sought the unanimous consent needed to fast-track the bill through all legislative stages, as has been granted for all special pandemic bills.

The opposition rejected that idea. He then proposed to divide the contentious bill into two parts, fast-tracking the section that will implement the promised one-time payments to eligible Canadians with disabilities of up to $600, while putting off the passage of the other measures. That motion was also denied.

Then, after opposition attempts to get support to suspend the House sitting until later on Wednesday or resume regular sittings were also shut down, the House adjourned, with its next scheduled sitting a week from now. This means that unless an earlier sitting is scheduled, the proposed measures will not be implemented for at least another week.

As part of the bill, the Liberals looked to impose fines and jail time for those who fraudulently claimed or tried to claim CERB, in addition to including new language to encourage people to return to work, rendering claimants ineligible if they turn down a reasonable job offer.

In addition, the government wanted to pass changes around the CERB application periods that would allow people to claim CERB for a two-week period rather than the current four-week period. It also sought to create a new bill to rectify the risk of Canadians being penalized for missing key deadlines in ongoing legal matters due to the ongoing COVID-19 pandemic.

Rodriguez said he was “surprised and disappointed” at what transpired.

“What I’m doing now is I’m calling all the House leaders again, to talk to them and see if we can find a path forward,” he told CTVNews.ca.

In a Wednesday morning press conference several hours before sitting, Rodriguez questioned why parties that called on the government to introduce some of these measures would then not allow them to be implemented.

“What I’m asking them is to consider the importance of this bill. The fact that it facilitates payments for kids with disabilities, it expands access to the wage subsidy, for example for seasonal workers. I mean, there are good things in this bill,” Rodriguez said, calling on the other parties to put politics aside.

Asked why the Liberals were not able to make concessions or cater to some of the opposition requests in order to advance the measures, he said that what the other parties wanted had “nothing to do with the bill.”

“So if they want to talk about the bill I’m there… But what they’re talking about has nothing to do with the bill,’ he said.

It remains to be seen whether the Liberals will try again to advance this bill before the next scheduled sitting on June 17. For now the bill remains in legislative limbo. It could go forward with the backing of one other party but that would be through the regular legislative timeline which could take weeks to move through all stages.

In advance of Wednesday’s sitting the NDP, Bloc Quebecois and Conservative parties all stated they were not ready to pass the bill unless the Liberals made changes or took other measures.

NDP Leader Jagmeet Singh’s concerns centered around potentially sanctioning vulnerable people who applied for CERB because they needed the help, despite the bill focusing on fraudsters who “knowingly” scam the system, and not those who may have double-dipped due to confusion between this program and other financial aid offerings from the federal government.

Reacting to the way the sitting unfolded, Singh criticized the Liberals for trying to wrap several different measures into one bill, saying the NDP was in favour of fast-tracking the disability aid carve-out.

Conservative Leader Andrew Scheer and his caucus continued to call for a proper resumption of House of Commons sittings, stating during Wednesday’s 12-minute meeting that if MPs were sitting regularly they could have considered the proposed one-time disability payment several days ago when it was first announced.

“Conservatives of course believe that Parliament should be sitting and had we’ve been sitting normally we could have debated this bill, we could have facilitated the Government House Leaders’ request but of course the government has refused to allow this house to do its work as it normally would,” he said.

Bloc Quebecois Leader Yves-Francois Blanchet said Wednesday that his party is willing to work to make improvements to the bill, if the government allows Parliament to do its work.

“I believe that this government is trying to behave as if it was a majority government,” Blanchet said, adding that the Liberals are trying to get their way and “rubber stamp” COVID-19 aid measures, while the opposition are trying in good faith to do their job.

“The most poisonous pill of all of that is the government trying stubbornly to act as if there were not 338 people having been elected last October, and doing as if it was a majority government led by some kind of a prince, which is not the case,” Blanchet said.