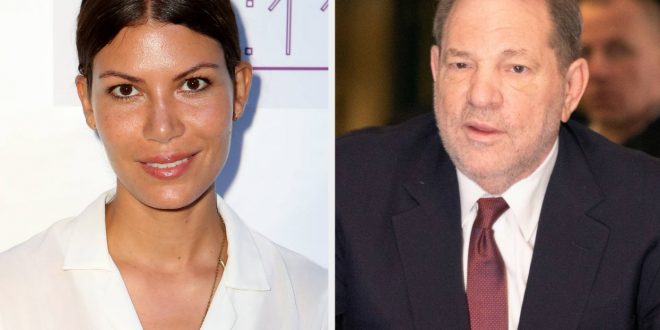 Model Tarale Wulff later testified that Weinstein raped her and told her, “‘don’t worry, I’ve had a vasectomy.’”

“I’m losing time. I’m losing money. I wouldn’t wish this on anyone,” she said, wiping away tears.

In total, two women testified on Wednesday that they had been sexually assaulted by Weinstein. The first allegation came from Dunning. Later in the day, model Tarale Wulff took the stand and detailed her alleged rape by Weinstein at his home.

Weinstein has not been charged with assaulting either woman. Their testimonies will be used by prosecutors to illustrate Weinstein’s “prior bad acts” to demonstrate a pattern of abuse.

Dunning said she first met Weinstein in 2004 when she was a waitress at a New York City nightclub.

“Bottle service was a new thing then, so my job was to hang around kind of convincing wealthy clients and celebrities to get a table and buy a bottle of alcohol,” she said. “I hated my job at the time, so I used to kind of hang out in the back corner of the club.”

Dunning said Weinstein was dining near the back of the club one night when they struck up a conversation — she had heard of Harvey Weinstein but did not recognize him at the time.

When she told him that she was a struggling actress, she said, Weinstein told her he would help her get roles in the acting industry.

Over the next few months, Dunning said she had several meetings with Weinstein, including reading for parts in his films. She and her fiancé also socialized with Weinstein and his then-wife, Dunning said, adding that he once invited the couple to Whoopi Goldberg’s birthday party.

In 2004, Dunning said she met Weinstein and his then-assistant at a boutique hotel in Soho. During the meeting, Dunning said Weinstein put his hand under her skirt, inside her underwear, and inserted his fingers inside her.

“There were no red flags in our conversation or anything that told me this was going to happen,” she said. “I kind of froze at first and then stood up. He was talking really fast and saying stuff like, ‘Don’t make a big deal about it. It won’t happen again.’”

Dunning said she left the hotel but decided not to tell anyone about what happened.

“I was embarrassed. I wanted to pretend like it didn’t happen,” she said. “I didn’t want to be a victim.”

A few weeks later, Dunning met with Weinstein and his assistant once again at another hotel in New York City. Dunning said she expected the meeting to take place at the hotel’s restaurant, but when she arrived, the assistant told her Weinstein was waiting for them in his suite.

“At that point, everything became very tense, he began screaming at me,” she said. “He just kind of towered over me and shouted, ‘You’ll never make it in this industry! This is how I made three actresses! That’s what everyone does!’”

When the prosecutor asked her if Weinstein had named the three actresses, Dunning recalled that he named Charlize Theron and Salma Hayek, but she could not recall the name of the third.

Hayek has previously described Weinstein as a monster who sexually harassed and threatened to kill her. Theron has previously spoken about Weinstein, saying he frequently lied to manipulate women, pitting them against each other professionally and sexually.

“You thought he was joking weeks after he had put his fingers inside your most personal space in the planet — your vagina?” he said.

Following Dunning’s testimony, model Tarale Wulff was called to the stand, where she testified that Weinstein raped her in 2005.

Tarale Wulff met Weinstein when she was an aspiring actor working as a server at the cocktail lounge of the New York City restaurant Cipriani — where Weinstein was a frequent guest.

“One night, when I served him a drink, he asked me what I did and I told him I was an actor,” Wulff said. “He said I had a ‘great look’ and should come and see him for a part.”

That same night, Wulff said she was wiping down the table when Weinstein took her by the arm. At first, she said, she believed he wanted to continue their previous conversation about her career, but he continued to lead her up the stairs into a dark area that housed the restaurant’s ice machines.

Once upstairs, Wulff said Weinstein finally let go of her arm, and saw him moving his hand under his shirt, which was untucked.

Wulff said she became scared, threw the towel at him, and ran back to the lounge.

She later got a call from Weinstein’s office a few days later, asking her to come in and read for a part. At the meeting with the casting agent, Wulff said she never actually auditioned, instead, she was told that a car was waiting for her to take her to meet Weinstein.

“I was not expecting that,” she said. “I was a bit taken aback, but I thought we were going to meet at a coffee shop.”

The car took Wulff to a loft at Soho, where she said she met Weinstein.

“He seemed busy, he was walking around like he was getting ready to go somewhere,” she said. “I walked over to where he was so he could hear me as we conversed.”

In the loft, Wulff said Weinstein took her by the arms, sat her down on the bed, and pushed her so that she was laying back. He then proceeded to rape her, she said.

“He said ‘don’t worry, I’ve had a vasectomy,’” she recounted. “He was bigger and heavier and weighed me down. I remember when he put me on the bed, his shirt was open, I recall a scar on the side. After that, I froze. I went numb. I just lay there, looking over his shoulder.”

Wulff said that she never met with Weinstein after that, adding that she only saw him from afar at a fashion show some years later and recounted how she felt “scared, small, and intimidated.”

Charlize Theron’s name was misspelled in a previous version of this post.