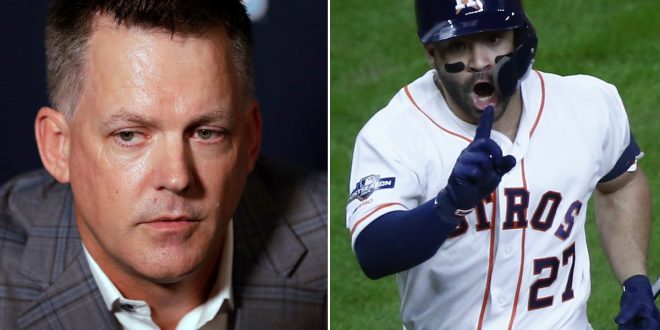 If only A.J. Hinch knew this firestorm was coming.

The embattled former Astros manager on Wednesday tried to walk back his non-denial of rumors his team used electronic buzzers under its uniforms, in addition to its documented illegal sign-stealing scheme using a video monitor, to alert batters as to what pitches were on the way.

“After my interview with Tom Verducci [of MLB Network] last week, there has been a significant reaction to my answer to the ‘buzzer’ question.,” Hinch said in a statement to Sports Illustrated. “To be clear, I have never seen any such device used in baseball. I am not aware of any such device existing or being utilized with the Astros, the players, or any other team.”

There were rumblings Houston star Jose Altuve may have been wearing a buzzer when he hit his series-winning walk-off home run against the Yankees in the 2019 ALCS — because he warned his teammates not to rip his jersey off as part of the celebration. Altuve said afterward his wife didn’t want his jersey ripped off, and he has since denied the claims about any buzzer.

MLB was not able to substantiate claim the team used wearable devices when stealing opponents’ signs as part of its lengthy investigation into the Astros, but Hinch’s vague answer last week reignited the scuttlebutt and caused Yankees catcher Gary Sanchez to joke Wednesday that the Yankees could rip off “everything” if he hit such a pivotal home run.

“We got investigated for three months,” Hinch told MLB Network last week, while saying the Astros were “wrong” for cheating. “The commissioner’s office did as thorough an investigation as anyone could imagine was possible. I know you mentioned the emails and the texts and the messages. And I believe it. And I believe in the findings.”

The Astros were found to have stolen signs electronically in 2017, when they also beat the Yankees in the ALCS, and through parts of 2018, but the league couldn’t conclude whether Houston also cheated in 2019.

Hinch and GM Jeff Luhnow were suspended by MLB for their roles in the cheating scandal and both subsequently were fired by the Astros.