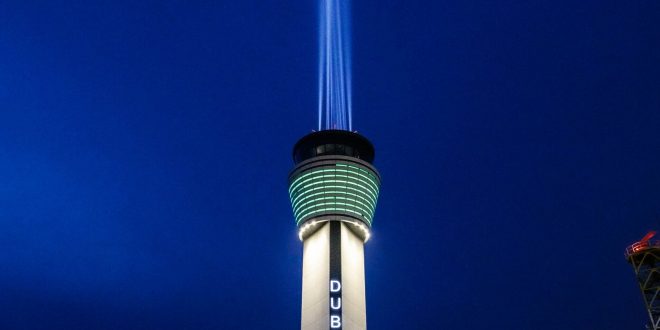 A shining example of solidarity across Ireland

People of all ages, from all parts of Ireland have been invited to take part in the #ShineYourLight campaign at 9pm tonight in a gesture of hope and solidarity during the Covid-19 pandemic.

RTÉ coverage of the event begins at 8.30pm on RTÉ Radio One with John Creedon followed by TV coverage at 9pm.

This will feature music performances and spoken word from artists including Sinead O’Connor, Paula Meehan and Colm Mac Con Iomaire.

As part of the campaign Government buildings and other national and local public buildings will shine their beacon lights.

The new air traffic control tower at Dublin Airport is among the buildings taking part.

The Irish Aviation Authority (IAA), in collaboration with ESB, will beam a beacon of light into the sky from thw tower, which is Ireland’s tallest occupied building.

Shannon Airport runway lights will shine at full strength – at 3,199 metres (10,495 ft), its runway is the longest in Ireland.

The Grand Canal Dock basin in Dublin will be lit up by Waterways Ireland with a floating installation of lit candles.

Irish embassies and missions around the world will also be shining a light to remember those who have lost their lives in the Covid-19 crisis and in support of Ireland’s frontline workers.

Today our embassies & missions around the 🌎 are participating in the #ShineYourLight campaign to remember those who have lost their lives to #COVIDー19 & their loved ones, & to thank our key frontline staff for their ongoing crucial work throughout the crisis. #LonraighdoSholas pic.twitter.com/nA9wOxNddG

The National Directorate for Fire and Emergency Management (NDFEM) said it is supportive of #ShineYourLight but reminded householders to avoid hazards such as candles and high-temperature lamps near flammable items.

Some of the West End’s leading Irish names, along with Irish Youth Musical Theatre, have joined together for a recording of ‘You’ll Never Walk Alone’ from the musical ‘Carousel’.

Information on how to share your pictures from #ShineYourLight is here.

Previous Coronavirus: What’s happening in Canada and the world on Saturday | CBC News
Next How COVID-19 impacts nearly every decision health-care workers make in hospital and at home | CBC News