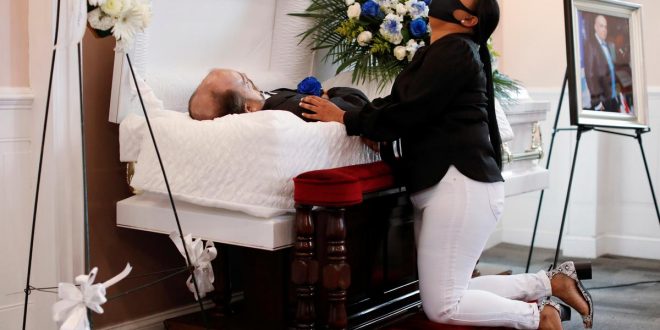 Maria Ortiz reacts while kneeling beside the body of her partner Jose Holguin, 50, originally from the Dominican Republic and who died of complications related to the coronavirus disease (COVID-19), during a viewing service for Mr. Holguin at International Funeral & Cremation Services in the Harlem neighborhood of Manhattan, New York City, U.S., May 16, 2020. Picture taken May 16, 2020. REUTERS/Andrew Kelly

When he died on April 28, his death was just a speck in a giant storm of numbers defining the global COVID-19 pandemic. To the world, he was just another number added to the tally recited daily by governments and news organizations.

To his family, he was the teenager who struck out for the United States from the Dominican Republic to make their lives better. He worked at a grocery store, at a barber shop, and as a handyman. He used the money he earned to rebuild his mother’s home, and his children went to visit her nearly every summer.

As the United States opens up, Jose’s family agreed to be photographed and interviewed because they thought their gut-wrenching reality might help save lives.

“I feel like some people are failing to understand that this is serious,” said his daughter, Jessica Holguin, 25. “This is real. It’s literally killing people. It’s killing our communities, our loved ones, our friends, our family members, moms, dads, brothers, sisters.”

It’s a strange thing to let a journalist document your grief. It means that as you crumple on the floor next to your dad’s casket and pray, someone’s snapping a picture. It means that when your dad dies, you tell a stranger about what he left unfinished.

Jessica said she felt a duty to speak out. Jose’s other daughter agreed to pictures but wasn’t ready to talk about how she felt.

The United States is expected to pass a toll of 100,000 deaths from the coronavirus in coming days. About a third of those have been in New York state. Its biggest city – New York City – has broken its data down by race and ethnicity.

As a Latino, Jose was 40 percent more likely to catch COVID-19 as his white countrymen, that data shows. He was more than twice as likely to die. The infection and death rates are similarly grim for African-Americans.

Just before dawn on Easter, Jose wasn’t feeling well. He had cancer so his partner of a decade and a half rushed him to the hospital.

He tested positive for the coronavirus, then his heart stopped – twice. At least one of those times he was without oxygen to the brain for 15 minutes. As hospital staff fought to revive him, his ribs broke. He was intubated and put on life support.

When it became clear he was unlikely to survive, New York Presbyterian said three family members could have five minutes each to say goodbye. The hospital gave them yellow suits with gloves, hairnets, masks and face shields.

“It was a little bit longer than five minutes because they understood. We just broke down crying,” said Jessica. “I just remember my mask being full of tears.”

Jose had wanted to be buried where he was born but the family didn’t have the money to ship his body back to the Dominican Republic. His partner didn’t speak English so all of the arrangements ran through his daughters.

As sick as he was, Jessica never actually expected Jose to die.

He was loud and happy. He liked music. Sometimes he would drink beer and dance bachata. His family would joke that his belly was so big that once it entered a room, it would take another ten minutes for the rest of his body to follow.

It took a while for her and her sister to screw up the courage to look at him in the casket. They started at the back of the chapel and slowly inched their way forward. It took an hour of the two-hour viewing for them to make it to the front row of chairs, and then finally forward. They wailed.

Previous 3 Reasons Why Oxford’s Record-Breaking COVID-19 Vaccine is a Risky Bet
Next What you need to know about COVID-19 in Ottawa on Friday, May 22 | CBC News