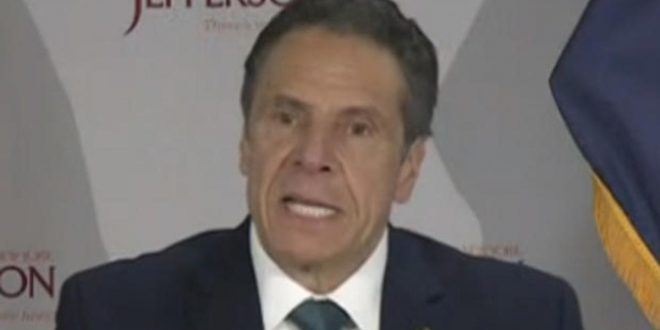 New York Governor Andrew Cuomo said Wednesday that 14 other states are now investigating cases of a mysterious illness appearing in children that is potentially related to the coronavirus. The governor urged parents to “be aware” of the inflammatory syndrome believed to be connected to COVID-19.

“If your child has been exposed to someone who had COVID, even if it was several weeks ago, that is a special alert in this situation,” Cuomo said at his daily press conference Wednesday. “Parents say ‘should I be concerned?’ You should be aware.”

New York has now identified over 100 cases of the “pediatric multi-system inflammatory syndrome.” Doctors in the United Kingdom first noted cases of the syndrome, which appears to be similar to Kawasaki disease, a rare but serious illness seen in some children who have contracted a viral infection.

“New York is in many ways the tip of the arrow here,” Cuomo said. “(We are) looking at 102 cases where children who may have been infected with the COVID virus show symptoms of an inflammatory disease like Kawasaki Disease, or toxic shock-like syndrome.”

“That means children either currently have the virus, or could have had it several weeks ago,” Cuomo said.

A majority of the cases in New York, 70%, had to be treated in an intensive care unit, while 19% required intubation and 43% are still hospitalized. Cuomo said the cases have cropped up across the state and in a wide range of ages, with a majority in children between five and 14 years old.

Cases reported in New Jersey have a similar wide range in age: 3 to 18 years old, New Jersey Health Commissioner Judith Persichilli said at a separate press conference Wednesday. She said the state has received 18 reports of the syndrome from nine counties, and that four of the identified cases have tested positive for COVID-19.

New York’s Department of Health sent an alert to 49 other states on Monday, notifying them of syndrome’s correlation with COVID-19. At the time, only 85 cases had been reported in New York.

The governor noted on Wednesday that it was only recently that public health officials believed children to be safe from contracting the coronavirus.

“We thought that children were not especially affected by the virus, to now find out that they might be, and it might be several weeks later, this is truly disturbing,” he said.

Cuomo said that because the syndrome may not show up until weeks after coronavirus infection, and does not present as a normal COVID-19 case, it may not have been initially diagnosed as related to the virus.

COVID-19 symptoms are predominantly respiratory; but the Kawasaki-like syndrome seen in children appears to be caused by an inflammation of blood vessels, presenting cardiac symptoms. Predominant symptoms include prolonged fever, abdominal pain and a skin rash. Afflicted children, however, have also shown had changes in skin color (becoming, pale, patchy, or blue), difficulty feeding (for infants), difficulty breathing, a racing heart, as well as lethargy, irritability or confusion.

According to the governor, the state’s department of health has told hospitals to prioritize COVID-19 testing for children who come in with any of the symptoms related to the inflammatory syndrome.

“This is a parent’s worst nightmare,” he said.