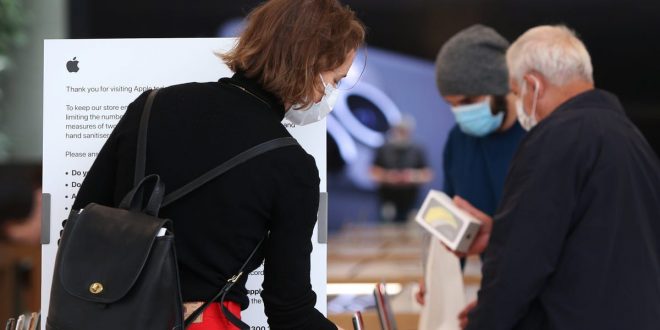 Apple is re-closing 30 additional stores in the US, a move that comes after the tech giant began re-closing stores in June as COVID-19 cases have spiked throughout the country, according to CNBC.

The new store closures will occur in Oklahoma, California, Georgia, Idaho, Louisiana, Nevada, and Alabama, according to the report. Additional stores in these states will be closing tomorrow, the report says. Apple previously re-closed stores in Texas, Florida, North Carolina, South Carolina, and Arizona.

Apple did not immediately respond to Business Insider’s request for comment.

“Due to current COVID-19 conditions in some of the communities we serve, we are temporarily closing stores in these areas,” Apple said in a previous statement regarding store closures. “We take this step with an abundance of caution as we closely monitor the situation and we look forward to having our teams and customers back as soon as possible.”

The closures come as COVID-19 cases have spiked across the US. According to an analysis by The New York Times, coronavirus cases are increasing in the majority of states, including those in which Apple has decided to re-close its stores. Some of these states were also among the first to ease their sta-at-home restrictions, such as Texas and Florida.

The US set another record for new coronavirus cases on June 30, according to The New York Times, as 48,000 new cases were announced. Eight states, including Alaska, Arizona, California, Georgia, Idaho, Oklahoma, South Carolina, and Texas, also recorded single-day highs, according to the Times.

Apple said in May, when it outlined its approach to reopening, that re-closing stores would be an option.

“We look at every available piece of data — including local cases, near and long-term trends, and guidance from national and local health officials,” Deirdre O’Brien, Apple’s senior vice president of retail and people, said in a letter at the time. “These are not decisions we rush into — and a store opening in no way means that we won’t take the preventative step of closing it again should local conditions warrant.”

Previous Their Loved Ones Died From Coronavirus. Here’s What They Want You To Know.
Next Fears overseas travel could trigger second virus wave