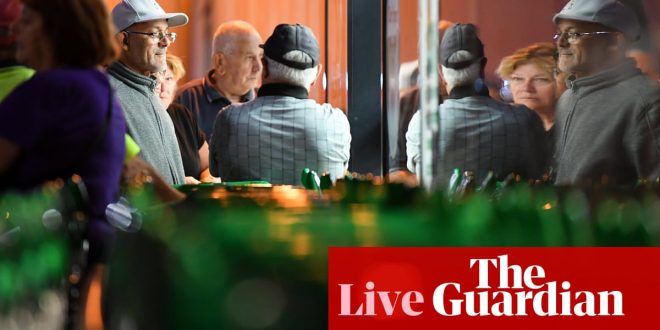 Brendan Murphy says Easter is “going to be very different this year”. People have been asked not to travel over the holiday.

“But the rest of us will have to do things differently.”

The major concern continues to be community transmission. Murphy acknowledges he may sound like a “broken record” on this.

“We all know just how infectious this virus can be. Just look at what it did on some cruise ships. Thirty-five people in one wedding. The Qantas and Jetstar baggage handlers in Adelaide. It spreads very quickly. So we’re in a good place at the moment. We are achieving good control because the community has done what we have asked.”

Murphy says it’s estimated that more than 2,000 people have “fully recovered from the virus already in Australia”.

He says authorities are “increasingly confident” that they can prevent a situation like that in New York if people “continue to adhere to” the social distancing measures.

He says there are:

“That is probably the lowest rise we’ve had for a few days and it does tend to continue the trend we’ve seen of flattening of the curve.”

Fuller is asked what laws are being considered as far as the criminal investigation goes.

You have overarching biosecurity acts from a national or federal perspective and then you’d have state legislation in terms of borders and then that criminal negligence-type crimes. But, as you said, we’re at the beginning. I haven’t even handed over the evidence I’ve collected thus far and there’s a lot more work to be done.

Fuller says he has received a letter from Carnival that states that they will provide whatever documentation is requested through the investigation.

He is also asked if he’s disappointed that no agencies involved in the Ruby Princess issue have taken responsibility for what went wrong.

“I suppose the important thing is, from the New South Wales state perspective, this, the premier stood up, put police in charge of the ports and the airports in terms of border control and we haven’t seen this happen again. I think that’s the important thing. Because coronavirus is not over and we still have planes landing every day and hundreds of Australians returning, which is important that we manage that, with that same sort of humanitarian perspective.

“We will continue from a police perspective and they’ll look at all of those agencies. It’s not just about finishing on Carnival or finishing on person X, we’ll have to look at all the touch points to get to the bottom of it. There will be lessons learnt, I have no doubt.”

Fuller says there will also be coronial oversight of the police investigation.

Fuller says that crew members who need medical assistance have been taken off the ship. Fuller says about 200 people who are still on board the cruise ship have symptoms.

Authorities are looking at finding a safe place for the ship to dock.

Fuller is asked whether cruise line operator Carnival was underplaying the symptoms of those on board.

“We will only know by getting the ship’s records, the records from the doctors on the ships and obviously there are over a couple of thousand people who were passengers on the ship who have come off.

“Well, there seems to be … discrepancies between the information provided by Carnival and what I would see is the benchmark for the laws that the federal government and the state government put in place in terms of protecting Australians from cruise ships when coronavirus had started.”

Fuller also says that there has been another crew member taken off the Ruby Princess today.

NSW police commissioner Mick Fuller confirms that there will be a criminal investigation into the Ruby Princess debacle.

“There is clear evidence that [Covid-19] has been brought off that ship,” Fuller says. There’s clear evidence now when it stopped in New Zealand Covid-19 has come off that ship and at least 10 people have died in Australia from COVID-19. The only way I can get to the bottom of whether our national biosecurity laws and our state laws were broken is through a criminal investigation.”

He adds: “The investigation will look into the actions of every agency.”

Ten passengers who were on the cruise ship have now died.

While we await those press conferences, I might point you to this excellent weekend feature by my colleague Lisa Cox.

We are expecting press conferences from the chief medical officer Brendan Murphy, the WA premier Mark McGowan, and the NSW police commissioner Mick Fuller, after 3pm.

Burke is asked how Labor will go in opposing aspects of the legislation.

His key point is that the opposition wants the legislation to pass. They want it to pass “in the best possible form”.

At the moment there is no existing legislation. They have not finished and we have not been presented with anything and I don’t think the government is playing a game. This is genuinely complex legislation to deal with every circumstance as to how this would unfold in any workplace. So, it is complex. Once we see it they may have already made … the amendments to the announcement if they haven’t we would look at how we can use the parliament to be able to do with that.

On the leave issue, Burke describes Labor’s concerns like this:

An employer at the moment, if they force someone to take leave that someone has built up over the last year and in some cases they would have built up over many years, that is a liability that the employer already owes a worker, it is already on the books. At the moment, the way the government has described it, the employer can register for JobKeeper, register that employee as part of the scheme and even though the employee is simply getting what they were already owed and entitled to long before anyone had ever heard of coronavirus, the employer will be getting $1,500 a fortnight and keep it to improve their balance sheet. That is not what this program was established for.

Tony Burke, who is Labor’s industrial relations spokesman, turns to the jobkeeper package.

He says the government’s jobkeeper package could be improved. Burke is concerned that some casuals will be left out of the package.

“We get a whole lot of perverse outcomes with the 12 month rule that the government is currently imposing.”

He says that there will be casuals who only work a shift or two each fortnight, who will now get $1,500 a fortnight, while another worker who relies on regular casual shifts but has not been at the same company for 12 months will not be eligible for the wage subsidy.

He is saying that the parliament should be sitting more often than is scheduled. Parliament is set to return to next week on Wednesday, ostensibly to pass the jobkeeper package, but will then will not return until until 11 August.

“When you push $200 billion out the door in the space of six months with legislation drafted only days before it gets introduced and go through all of its stages, mistakes will happen. We need to have the parliament sitting regularly to be able to deal with those errors and we have found ways now so that we can be sitting with only one-third of the members of the House of Reps present, with similar arrangements in the Senate. We need to be there to make sure the legislation can be adapted, as is required, and also, with $200 billion going out the door and no scrutiny on the floor of the house on a regular basis?”

Previous: Tom Hanks’ son Colin shares tutorial on how to turn kerchiefs into coronavirus masks
Next: Coronavirus: What’s happening in Canada and around the world on April 5 | CBC News