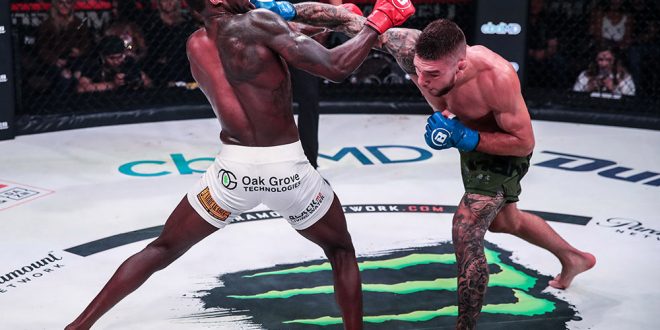 Yaroslav Amosov made a statement in Bellator’s deep welterweight division on Friday night by nothing one of his biggest career victories, as he won a battle of attrition over Ed Ruth in the main event of Bellator 239.

A competitive first round was Ruth’s best. Amosov threw Ruth in the clinch, but Ruth (8-2 MMA, 8-2 BMMA) got back to his feet and took Amosov down with a double. The rest of the way Ruth got the better of things in a round mostly contested in the clinch.

Amosov dug down in round two, though, and turned the fight in his favor. He widely outstruck his opponent the rest of the way, finding a home in particular with crisp left hands, and got the better of the grappling game to boot, giving him the advantage everywhere the fight went. It was a rinse-and-repeat performance over the fight’s final 10 minutes as Amosov cemented the victory.

With his fifth career decision win, the Ukrainian Amosov improved to 5-0 in Bellator. Ruth, the former NCAA champion at Penn State, had a two-fight win streak snapped for his first career decision loss.

The welterweight bout was the Bellator 239 main event at WinStar World Casino. The main card aired on Paramount and streamed on DAZN following prelims on MMA Junkie.

Previous Coronavirus Found In China Prisons, As Cases Spike In South Korea
Next Don’t Talk to Strangers? These Apps Encourage It.