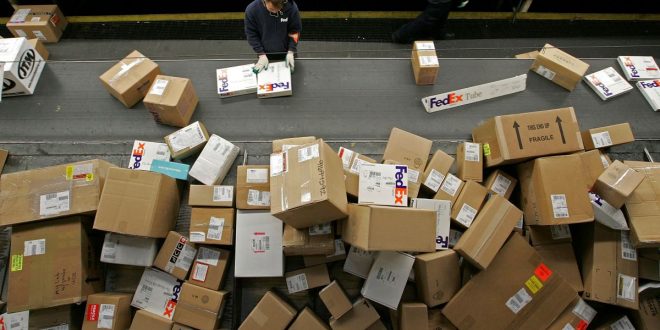 One of the few joys left in buying stuff online is getting a text alert that your package is on its way. But even that has become a cause for concern now thanks to a new scam that disguises scam texts as FedEx shipping notifications.

Recently, people around the country (including a member of the Gizmodo staff) have started receiving scam texts containing their name and what appears to be a FedEx tracking number and a link for configuring delivery preferences.

However, if you actually click on the link, you are sent to a fake Amazon listing and a survey promising a reward to people who complete the survey. If you proceed any further, the survey will then ask users for a range of personal information including their credit card information, which for anyone who hadn’t already started feeling suspicious, should set off serious alarms.

Apparently, by entering in your address and credit card number and agreeing to pay a shipping fee for your “prize,” you are also signing up for 14-day trial that turns into a $100 recurring subscription for a range of products, which you will continue to get billed for every month until you figure out how to cancel the payment.

Currently, there doesn’t seem to be a clear pattern as to how the perpetrators of the scam are targeting potential victims as people with both iOS and Android phones have reported receiving fraudulent texts. Some victims even say that they hadn’t even ordered any packages recently and that these scam texts just showed up on their phone randomly.

Local police departments and security agencies have started warning residents of the potential dangers of the scam, though because of how similar these fake texts look compared to genuine FedEx delivery notifications, differentiating between the two can be tricky.

However, if you pay attention, there are some telltale signs that you might be getting scammed. Most importantly, FedEx tracking numbers are all 12 (for FedEx Express) or 15 digits (for FedEx Ground) long, as opposed to the 10-digit codes seen in texts from people hit by the scam.

Additionally, FedEx tracking numbers are almost always all numbers, so if you see any alphanumeric tracking numbers, that should also serve as a potential warning. Also, if a link from FedEx sends you to a random survey promising prizes, that’s a dead giveaway every time. And if you still have any doubts, your best bet is to go FedEx’s website and enter in any tracking numbers yourself, don’t use links or other referral methods.

Finally, if you do get hit with scam text, you can help prevent others from being targeted by reporting the number in Android and iOS, which should help Google, Apple, and your wireless provider better identify the source of the spam and block scam texts before they ever reach your phone.