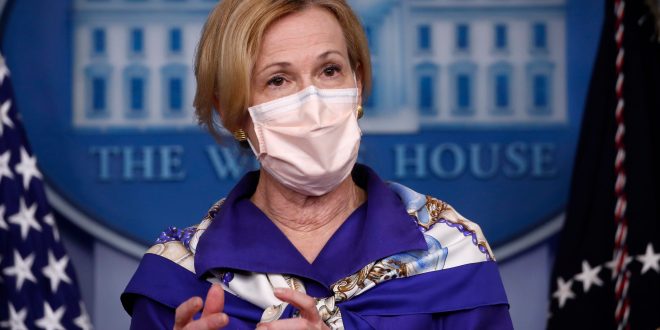 Birx: FDA ‘has been very clear’ on its concerns about using hydroxychloroquine as COVID-19 treatment

Dr. Deborah Birx is offering Americans guidance on how they can enjoy the Memorial Day weekend, the traditional kickoff to summer. She urges people to enjoy the outdoors, but remain mindful of the virus and the need to stay socially distant. (May 22)

WASHINGTON – Dr. Deborah Birx, the White House coronavirus task force coordinator, underscored a U.S. Food and Drug Administration’s warning about using hydroxychloroquine to prevent COVID-19 in the same week President Donald Trump revealed he had been taking it ward off the virus.

“I think the FDA has been very clear on their website about their concerns about hydroxychloroquine, particularly when it’s combined with a macrolide,” she told reporters Friday at a White House press briefing, referring to a class of antibiotics such as azithromycin or clarithromycin.

Trump, who has promoted hydroxychloroquine as a “game changer,” said Monday he had been taking the drug daily for about a week and a half as an added measure to avoid getting the coronavirus. He also said he was taking zinc and had taken an initial dose of azithromycin. The president, who said he’s tested negative for COVID-19, said Wednesday he would finish taking the drug “in a day or two.”

The FDA has cautioned against the use of hydroxychloroquine and chloroquine, a related drug, for COVID-19 treatment outside of hospitals or clinical trials due to the risk of life-threatening heart problems. Hydroxychloroquine is FDA-approved to treat or prevent malaria as well as autoimmune conditions such as lupus and rheumatoid arthritis.

President Donald Trump said Monday he is taking the anti-malaria drug despite warnings about its effectiveness.

Arrhythmias can lead to a sudden cardiac death, according to researchers, but the report did not associate the study’s fatalities with adverse cardiac affects.

The study comprises of 96,000 coronavirus patients from six different countries who were hospitalized between Dec. 20 and April 14. Nearly 15,000 patients were treated with hydroxychloroquine or chloroquine alone or in combination with an antibiotic

“It clearly shows the comorbidity that puts individuals at more risk,” Birx said of the study, referring to patients with underlying health conditions.

“I think it was one of our clearest studies because there were so many thousands – tens of thousands – of individuals involved that the doctors clearly annotated who had heart disease and who had obesity, and you can see dramatically the increased risks for that.”

Birx added there are still controlled trials looking at use of the drugs as a prophylaxis against the coronavirus as well as using them in a hospital setting. She also urged millennials to check to see if their parents have any of the conditions mentioned in the study to help “protect them” amid the coronavirus pandemic.

More: Coronavirus, diabetes, obesity and other underlying conditions: Which patients are most at risk?

The president had touted hydroxychloroquine for weeks, frequently discussing anecdotal evidence of its impact from the podium during White House briefings. His administration stockpiled 29 million doses of the drug earlier in the pandemic.

Trump’s revelation that he had been taking the drug stunned doctors, health experts and politicians, who were quick to issue warnings about hydroxychloroquine’s long list of potentially dangerous side effects and its ineffectiveness against the coronavirus in recent studies.

“You’d be surprised about how many people are taking it, especially the front line workers, before you catch it,” Trump said Monday before revealing he was among those taking the drug.

The president said he began taking the regimen after two aides tested positive for COVID-19 and three members of the coronavirus task force entered quarantine over concerns they attended meetings with one of the staff members diagnosed with the virus.

Previous What you need to know about COVID-19 in Ottawa on Friday, May 22 | CBC News
Next Remdesivir alone is not enough, researchers conclude in first major Covid-19 trial of the drug