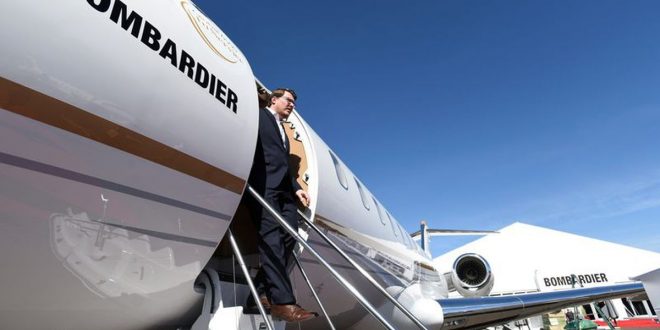 Bombardier Inc. is laying off 2,500 people in its aviation division, including about 1,900 people in Toronto and Quebec, as the Montreal-based transportation company slashes jobs in anticipation of reduced demand for business jets.

The job losses announced on Friday include 1,500 people in Dorval and St. Laurent, Que., 400 people at Bombardier’s Downsview factory in Toronto, in addition to cuts in the United States and Mexico.

“They are permanent,” Mark Masluch, a Bombardier spokesman, said of the cuts.

The layoffs will take place through 2020, subject to notice periods. Bombardier said it will take a $40-million charge as a result.

The air-travel industry has collapsed amid the COVID-19 pandemic, which has prompted governments to close borders and issue stay-at-home orders.

Bombardier placed about 10,000 of its Canadian employees on federal wage subsidies of 75 per cent between March and June. But as the company resumes production, it is adjusting its work force to meet an anticipated 30-per-cent drop in demand for aircraft, Mr. Masluch said by phone.

The federal program is intended to encourage employers to keep employees on the payroll by paying three-quarters of staff wages to a maximum of $847 a week, retroactive to March 15. The government recently prolonged the program to Aug. 29 from June 6.

The union that represents 717 of the laid-off workers in Quebec criticized Bombardier for not applying to extend the federal wage subsidy to the end of August. The International Association of Machinists and Aerospace Workers said it is “incomprehensible” the company did not seek to avoid the layoffs.

“We are extremely disappointed that Bombardier is refusing to reapply to the … program for all of its employees. It would have been better if the aircraft manufacturer had been more open to its employees in these difficult times,” said David Chartrand, Quebec co-ordinator of the labour group.

Bombardier’s share price on the Toronto Stock Exchange rose by about 5 per cent on Friday.

Walter Spracklin, a Royal Bank of Canada stock analyst, said the layoffs signal a tough period for Bombardier but were not overly surprising.

Bombardier’s Downsview factory in Toronto produces the Global series of aircraft. The Quebec plants of Dorval and St. Laurent furnish the interiors of the Toronto-made Global planes and produce Challenger jets. The smaller Learjets are made in Wichita, Kan.

On June 1, Bombardier said it had completed the sale of its CRJ commercial aircraft business to Mitsubishi Heavy Industries Ltd. for US$550-million, allowing it to focus on private jets.

Bombardier in March suspended its 2020 financial outlook and halted production at several plane and train factories due to uncertainties over the duration and severity of the pandemic.

In the first three months of 2020, Bombardier posted US$3.7-billion in revenue and a loss of US$200-million. The company, which employs 60,000 worldwide, said it had liquidity worth US$3.5-billion, including US$2.1-billion in cash.