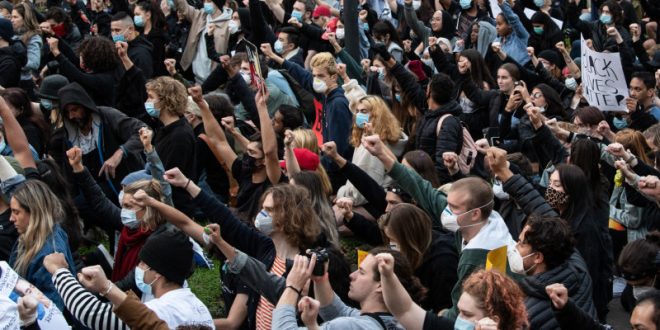 Are we there yet?

NSW Premier Gladys Berejiklian insists she understands community frustrations with restrictions even as she announces further easing and with more announcements “imminent”.

“The rolling easing of restrictions will continue as long as we all stick together,” she says.

But with national cabinet meeting again on Friday, sticking together is becoming harder given the different versions of what COVID-19-safe really means.

The Prime Minister is increasing the pressure on premiers with their borders still firmly shut while trying – unconvincingly – not to single out the economically key state of Queensland. He argues all premiers must nominate the date that interstate travel will resume in July.

But Annastacia Palaszczuk, headed to a state election in October and mindful of Queensland polling backing continued border closures, remains deliberately vague on her timetable. Rather than increasing faith in the steady advance of globalisation, COVID-19 has given new impetus to the claim that all politics is local.

With NSW and Victoria the only states to have kept their borders open and Victoria still moving particularly slowly on loosening up internally, Treasurer Josh Frydenberg is also targeting the premiers’ economic responsibilities.

“The restrictions more generally, if they’re eased, will see about 850,000 people get back to work and more than $9 billion added to the economy each month,” Frydenberg said on Thursday.

The political confusion in the states about how to handle this challenge is obvious.

Not that it helps the sense of national unity when millions of Australians struggling to keep their businesses afloat or get a job or just fit into the local pub observe the absurd contrast of tens of thousands of protesters packed into CBD streets of major cities last weekend. The fact even one protester in Melbourne has been confirmed as a COVID-19 case will only increase alarm about any repeat this weekend translating into a second wave of infections.

This time around, for example, Berejiklian is sounding much firmer ahead of time about the “consequences” of breaking the social distancing guidelines, while the NSW police are talking about issuing $1000 fines for an unauthorised gathering.

But the political confusion in the states about how to handle this challenge is obvious.

So a normally resolute Victorian Premier Daniel Andrews, although advising people to stay away from the protests last weekend, has been noticeably restrained in his otherwise robust rhetoric. The simultaneous image of Victorian police moving a few fishermen along from a jetty on the Mornington Peninsula only made the inconsistency look even more ludicrous.

The federal government – although not federal Labor – is far clearer in its language. Of course, it’s easier when Canberra doesn’t have responsibility for policing and arresting those breaking the rules. But Morrison argues the “double standards” will offend Australians and that people should be charged despite general community support for the issue. He’s confident his view will get even stronger community backing.

“It just puts a massive spanner in the works and that’s why it’s so frustrating,” the Prime Minister declared on a round of breakfast radio interviews. “And that’s why I appealed to people before last Saturday. By all means, raise your issue. But by doing this, they have put the whole track back to recovery at risk and certainly any further action on this front would be absolutely unacceptable on any terms.”

So Morrison is correctly stressing the far more complicated reality behind the gesture politics of rallies about the number of Indigenous deaths in custody or “institutionalised racism”. That reality includes intensifying but largely unsuccessful efforts by many governments over many decades to better address some of the social, economic and cultural reasons behind the high rates of Indigenous Australians serving time in jail.

But in the short term, the Prime Minister is also focused on the impact of the potential health risks of such large protest gatherings delaying the pace of the further opening up of the economy.

And despite continuing community apprehension about any possible new spike in cases, consumer confidence is lifting along with the fall in new case figures and an improved economic outlook.

The latest NAB data figures show the overall trend in consumption spending remains positive, for example, although the results for the week to June 6 suggests this is levelling off and slowing. Still, spending is down just 4.1 per cent over the same time last year and 2.8 per cent since the start of the year.

That might hardly count as good news but it’s far better than almost anyone expected even a month ago, and it’s certainly a massive improvement on the expectations of Treasury and the Reserve Bank in late March and April. The hospitality industry is obviously still struggling the most – down 39.6 per cent on NAB’s four-week moving average measure – although the pace of decline continues to ease.

Underlying all the political arguments about the duration and extent of JobKeeper payments, however, the bigger and much harder economic question is what will come next. It’s not just the US Fed emphasising there’s no quick rebound no matter what Donald Trump says. Chairman Jerome Powell dampened market enthusiasm about the increase in US jobs in May, instead talking of the long-term damage the virus will cause to the US economy.

That will reinforce RBA concerns about any abrupt withdrawal of emergency spending measures here come September and a warning of the need for greater fiscal stimulus to avoid a sudden deflation of an artificial economic bubble. Both Morrison and Frydenberg sound very cautious on this despite reassuring generalities about rebooting and reforming the economy to boost jobs and private sector investment.