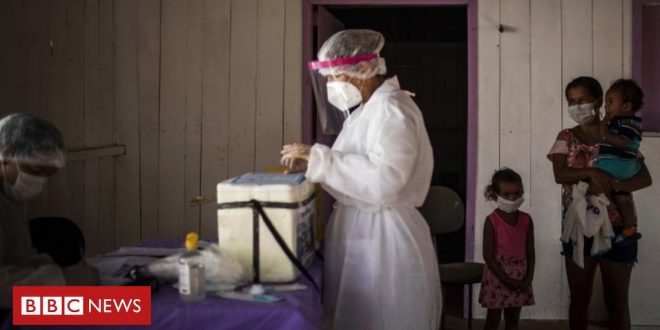 The number of coronavirus fatalities in Brazil has risen by almost 1,000 in a day, making the country’s overall death toll the world’s fourth highest.

Its figure of 28,834 has now surpassed France, and only the US, the UK and Italy have recorded more deaths.

President Jair Bolsonaro has consistently played down the outbreak, although the country has the world’s second-highest number of cases.

He has criticised state lockdowns for harming Brazil’s economy and jobs.

What are the latest figures?

This puts it past France’s total of 28,774. Even if new figures raised the French total back above Brazil, the trends in the two countries show deaths in the Latin American nation are on a far steeper upward trend.

According to a count by Johns Hopkins University, Brazil now has 498,440 confirmed cases.

The number of deaths in Brazil has been doubling roughly every two weeks, compared to about every two months in the UK, four months in France, and five months in Italy.

Experts have warned that the real figure may be far higher due to a lack of testing.

Will this change Brazil’s policies?

Mr Bolsonaro is unlikely to alter his stance, arguing that the economic fallout of lockdowns is worse than the outbreak.

He has fought what he calls “the tyranny of total quarantine” by state governors – despite the upward tick in cases – and has even called for Brazil’s football season to resume.

He has also been seen mingling with hundreds of supporters in Brasilia while not wearing a face mask.

On Sunday, Pope Francis added to the pressure on the president by highlighting the plight of the people of the Amazon.

“We call on the Holy Spirit to grant light and strength to the Church and to society in Amazonia, which has been harshly tested by the pandemic,” he said.

Amazonas state has one of Brazil’s highest infection rates and also one of the most underfunded health systems.

Many experts believe Central and South America are now the major hotspots for increased infections.

A combination of under-pressure healthcare systems and a mixed response by governments to the severity of Covid-19 has meant the region cannot apply the same easing of lockdowns taking place in Europe and elsewhere.

Previous Planning a summer vacation in Canada? Here’s what you need to know before visiting provinces | CBC News
Next Ontario records 326 new COVID-19 cases as testing numbers fall below 20K once again