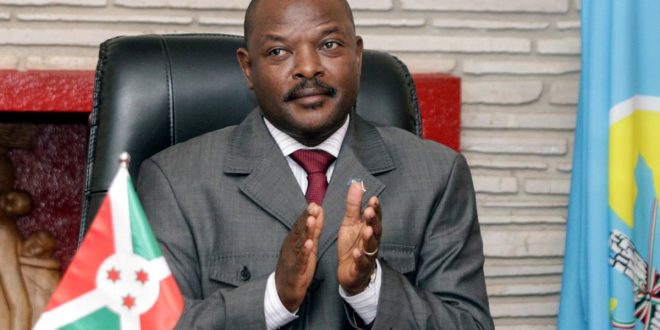 Burundi’s long-ruling president, Pierre Nkurunziza, has died suddenly of what his government said was cardiac arrest, just days after local media reported that he and his wife were being treated for COVID-19.

Mr. Nkurunziza, 55, had shown no sign of illness until he was admitted to hospital in the town of Karuzi on Saturday. After appearing to recover on Sunday, his health worsened “to very great surprise” on Monday and he could not be revived, despite several hours of effort, a government statement said.

Mr. Nkurunziza had been due to step down from the presidency within weeks, following an election last month in which his chosen successor was named the winner. The ruling party bestowed him with the title “eternal supreme guide of patriotism.”

In the early weeks of the pandemic, government officials had insisted that Burundi was “protected by God” and would not suffer from the virus.

Burundi was one of the few countries worldwide that refused to ban sports events or take other restrictive measures. It also allowed mass campaign rallies of tens of thousands of people during the election last month. Face masks were rarely seen.

Four experts from the World Health Organization, who had reportedly questioned the government’s response to the pandemic, were expelled from Burundi last month.

The president’s wife, Denise Bucumi Nkurunziza, was airlifted to Kenya on May 29 to be treated for COVID-19 at a top hospital in Nairobi, according to Kenyan media. On Monday, local media reported that Mr. Nkurunziza was in hospital with COVID-19. None of the reports were confirmed by the government.

If the link to COVID-19 is confirmed, he would be the first world leader to have died of the coronavirus.

Mr. Nkurunziza, an avid soccer player and sports fan, had attended a volleyball game as recently as Saturday, according to the government statement. On Sunday, he was interacting with people around him, until the sudden worsening of his condition, the statement said.

Burundi has reported only 83 cases of the coronavirus and one death. But at last report, a total of only 382 tests had been conducted in the country of 11 million – one of the world’s lowest rates of testing. There were unconfirmed reports of many deaths from the virus in Burundi.

Mr. Nkurunziza, a former rebel leader, won power in 2005 at the end of a 12-year civil war that ravaged Burundi and killed an estimated 300,000 people. He imposed authoritarian rule on the country, shutting down independent media outlets and arresting a number of journalists and opposition figures.

Under a peace agreement after the civil war, he was scheduled to step down in 2015. But instead he secured a disputed court ruling that allowed him to win a third term in office.

More than 1,000 people were killed in pre-election protests and postelection violence after Mr. Nkurunziza decided to remain in office. The International Criminal Court announced that it was investigating alleged crimes against humanity in the country. In response, his government became the first country to withdraw from the international court.

The secretary-general of Burundi’s ruling party, Evariste Ndayishimiye, was declared the winner of last month’s election with 69 per cent of the vote. Opposition parties disputed the result.

After announcing Mr. Nkurunziza’s death, the government declared a week of mourning.

Human Rights Watch, in a statement on Tuesday, said Mr. Nkurunziza leaves a legacy of “ruthless repression” in Burundi. “He ruled through fear to erect a system synonymous with the worst human rights abuses: extrajudicial killings, torture, disappearances and the systematic crushing of dissent,” said Lewis Mudge, the Central Africa director at Human Rights Watch.

Previous What is herd immunity and could it work with COVID-19?
Next More than half of states may be undercounting coronavirus cases by not following CDC guidelines