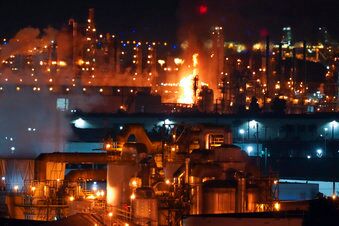 At least two explosions rocked a California oil refinery Tuesday night, sparking a massive fire that was visible for miles, according to reports.

The blaze started around 10:50 p.m., according to the Los Angeles County Fire Department.

One of the explosions went off before a fire started burning at a cooling tower at the refinery, fire officials said.

The blast lit up the night sky in the city of Carson and sent a large cloud of smoke into the air. The nearby 405 Freeway was temporarily closed to traffic in both directions but was later reopened, the station reported.

Crews were keeping the flames in check via fixed ground monitors while they worked to depressurize the system, according to fire officials.

There was no immediate information about the cause of the fire, or about injuries.

The company describes the facility on its website as the “largest refinery on the West Coast, with a crude oil capacity of 363,000 barrels per calendar day.”

Crews from the Los Angeles County Fire Department responded to the scene and were able to set up a perimeter, FOX 11 Los Angeles, reported.

No evacuations of nearby residents were required, the Los Angeles County Sheriff’s Department said.

Health officials were monitoring air quality in the area and found no harmful products emanating from the facility.