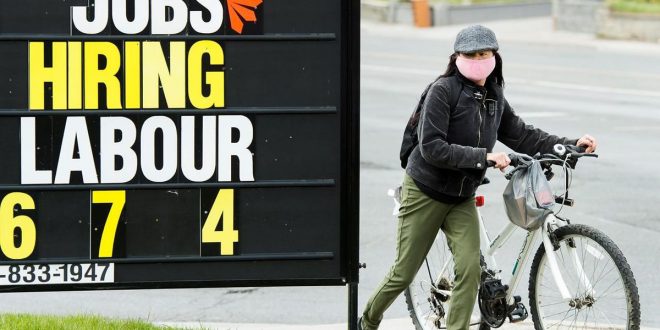 Canadian employment rose by a record-setting 953,000 people in June as COVID-19 lockdown restrictions eased across the country.

Combined with May’s gain of nearly 290,000 workers, the labour market has recovered about 40 per cent of the three million jobs that were lost during the pandemic, Statistics Canada said Friday. The unemployment rate fell to 12.3 per cent from May’s record of 13.7 per cent.

June’s employment gains were almost even split between full-time and part-time work. The labour participation rate jumped to 63.8 per cent from May’s 61.4 per cent as discouraged workers jumped back into job searches. Moreover, the number of Canadians who worked less than half of their usual hours for reasons related to COVID-19 dropped by 823,000 in June.

A blockbuster month was widely expected. Friday’s labour report reflected work conditions between June 14 and 20, making it the first to account for a broad easing of restrictions in Ontario, along with the return of retail businesses in the Montreal region. Other provinces also loosened their COVID-19 rules, allowing more companies to return and rehire.

“The easing of restrictions, which led to a visible increase in activity, allowed many Canadians to resume jobs that had involved physical interactions,” said Royce Mendes, senior economist at Canadian Imperial Bank of Commerce, in a client note. “However, that was low-hanging fruit in terms of a recovery,” he added, noting the speed of recovery is likely to slow.

Staffing at prepandemic levels will be challenging. Thirty-four per cent of small businesses said they were back to normal staffing levels and 24 per cent were registering normal sales for this time of year, according to recent survey results from the Canadian Federation of Independent Business. New job postings on Indeed Canada are 21 per cent below last year’s trend, and progress has recently stalled after a multi-week period of improvement.

That should make the recovery challenging for groups that were disproportionately affected by pandemic job losses, including women, young people, the less educated and gig workers.

In June, employment rose slightly more for women (6.1 per cent) than men (5.5 per cent). However, Statscan noted that men of all age brackets are closer to recovering all jobs lost since February. Among low-wage earners, the recovery for women also lags.

Previous Policing has ‘come at a cost’
Next Coronavirus gender gap: Scientists try to explain why men are much more likely to die of COVID-19