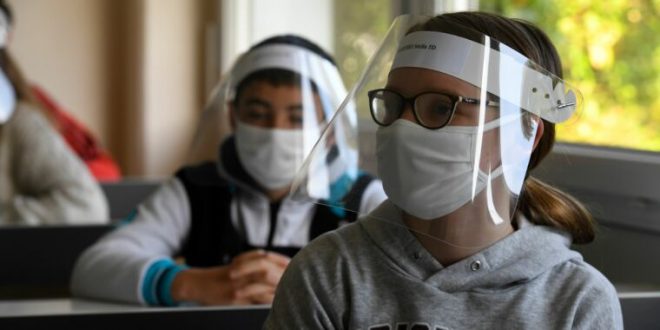 Trump has intensified calls to open schools, despite clear plans and surging COVID-19.

On the heels of criticism from President Trump, the US Centers for Disease Control and Prevention is planning to release updated guidance documents outlining how schools can safely reopen amid the COVID-19 pandemic.

“Well, the president said today, we just don’t want the guidance to be too tough,” Pence said in a press briefing for the White House Coronavirus Task Force. “That’s the reason why next week, the CDC is going to be issuing a new set of tools, five different documents that will be giving even more clarity on the guidance going forward.”

In tweets, Trump said he disagreed with the CDC’s guidelines, calling them “very tough & expensive.” He also threatened to cut funding to schools that refused to open before the November election.

However, as NPR notes, schools on average receive 10 percent or less of their funding from the federal government, and those funds are typically aimed at supporting children with disabilities and those from low-income households. Further, Pence clarified during the press briefing that the White House would be “very respectful” if “certain limitations” prevent some school districts from reopening.

It’s unclear which CDC guidelines or recommendations the president was criticizing. However, existing documents recommend that administrators consider closing schools for extended periods of time if there is “substantial community transmission” of COVID-19—which there currently is in many parts of the country.

In today’s press briefing, Pence emphasized that the agency’s guidelines should be tailored for each area and should not replace local or state rules or guidance. CDC Director Robert Redfield appeared alongside Pence and noted that the CDC’s recommendations were not intended to be used “as a rationale to keep schools closed.”

The Trump administration is not alone in urging schools to reopen. On June 26, the American Academy of Pediatrics updated its interim guidance, saying that it “strongly advocates that all policy considerations for the coming school year should start with a goal of having students physically present in school.” The organization noted that schools provide fundamental roles in “academic instruction, social and emotional skills, safety, nutrition, physical activity, and mental health therapy.” As such, it argued that the benefits to children of having schools open for in-person learning may outweigh risks.

But many teachers and parents are still wary of in-person learning. In many school buildings and classrooms, social distancing measures are difficult if not impossible to follow. And chronic underfunding has left buildings with poor ventilation.

On Tuesday, six groups representing teachers and parents released a statement saying that “Without a comprehensive plan that includes federal resources to provide for the safety of our students and educators with funding for Personal Protective Equipment, socially distanced instruction, and addressing racial inequity, we could be putting students, their families, and educators in danger.”

The statement went on to note that the administration has failed to provide leadership on preparing schools and has provided conflicting and confusing guidance.

The issuance of a new set of guidance documents may not provide clarity. Despite the lack of a clear plan while the disease surges in many areas, President Trump has intensified his calls for schools to reopen. On Tuesday, he vowed to pressure states to reopen schools in the fall, which could have a significant impact on the economy and the election.