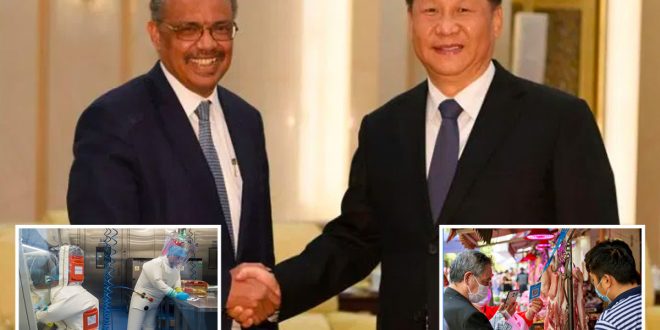 CHINA’s president personally asked the World Health Organisation to hold back coronavirus details and delay a global warning, it is claimed.

The WHO has been slammed for its handling of the disease, with some accusing it of “parroting Chinese propaganda”.

In particular, the organisation has been blasted for taking too long to declare the outbreak a pandemic, and echoing Beijing’s initial claims the virus could not be transmitted between humans.

And a bombshell report – which the WHO has denied – now claims Chinese premier Xi Jinping personally rang the WHO boss to ask him to do just this.

The call between Xi and WHO chief Tedros Adhanom Ghebreyesus took place on January 21, according to Der Spiegel.

The WHO didn’t classify the coronavirus a pandemic until March 11.

The BND estimates China’s information policy cost the world between four and six vital weeks in the battle against the pandemic, Der Spiegel said.

But the WHO hit back today with an angry response, branding the reports “unfounded and untrue”.

The organisation said in a statement: “Dr Tedros and President Xi did not speak on January 21 and they have never spoken by phone.

“Such inaccurate reports distract and detract from WHO’s and the world’s efforts to end the Covid-19 pandemic.”

It added: “China confirmed human-to-human transmission of the novel coronavirus on January 20 [prior to the alleged phone conversation].

“The WHO publicly declared on January 22 that ‘data collected … suggests that human-to-human transmission is taking place in Wuhan’.”

Many have accused the WHO – a United Nations organisation – of being taken in by China from the very first days of the outbreak.

Its international experts didn’t get access to the virus-stricken country until Ghebreyesus visited President Xi Jinping at the end of January.

What is the WHO, and why has it faced coronavirus criticism?

The World Health Organization was founded in 1948, and is based in Switzerland.

It is the UN agency responsible for global public health, and has 194 member states.

The WHO aims to “promote health, keep the world safe and serve the vulnerable”, and is funded by fees from members – with the amount dependent on population and wealth –  and voluntary contributions.

Trump, who has branded the WHO “very China-centric”, has accused it of not properly assessing the outbreak when it first emerged in Wuhan.

He has claimed that had the agency called out China’s “lack of transparency” and not taken the country’s assurances at face value, the outbreak could potentially have been contained “with very little death”.

On January 14, the WHO tweeted that early Chinese investigations had found “no clear evidence of human-to-human transmission” of the new virus.

But just a week later, the agency released a statement saying that it did appear that there was human-to-human transmission in Wuhan.

Despite the virus emerging in December, WHO experts were only allowed to visit China and investigate the outbreak on 10 February, by which time the country had more than 40,000 cases.

At the end of January, the WHO said travel restrictions were not needed to stop the spread of the coronavirus, which many countries ignored, and there has been some criticism that the agency’s guidance on face masks has led to confusion among the public.

And even after stories emerged showing China had tried to cover up the outbreak in Wuhan, Ghebreyesus praised President Xi Jinping’s country for its “transparency”.

He said in a statement on January 28: “We appreciate the seriousness with which China is taking this outbreak.”

He then hit out countries including the US for inciting “fear and stigma” by denying entry to travellers from China.

OUT OF MA’AM’S WAY

Police hunting two young siblings, 10 & 11, who vanished from their home in Wales

Ghebreyesus said there was “no reason for measures that unnecessarily interfere with international travel and trade”.

Among those to slam the WHO for its handling of the crisis has been Donald Trump, who last month suspended $500million of US funding for the organisation.

The US President claimed the UN agency had “failed in its basic duty and it must be held accountable” for promoting China’s “disinformation” over the pandemic.

CORONAVIRUS CRISIS – STAY IN THE KNOW

Don’t miss the latest news and figures – and essential advice for you and your family.

To receive The Sun’s Coronavirus newsletter in your inbox every tea time, sign up here.

Get Britain’s best-selling newspaper delivered to your smartphone or tablet each day – find out more.

Previous Tracking the spread of coronavirus in Canada and around the world
Next Sen. Lamar Alexander to self-quarantine after staff member tests positive for COVID-19 | TheHill