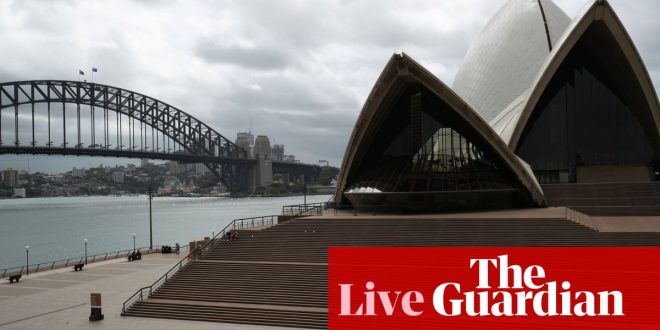 He warns that both the health and economic impacts of Covid-19 will take lives and livelihoods. He says we need to battle both “enemies”.

“I promise you we will be doing more,” Morrison says. He says he will have more to say about support and assistance shortly.

Morrison is now running a list of how pubs, cafes, businesses are changing the way they do things.

“But for many others, it has been devastating,” he says, referring to the long queues outside Centrelink offices this week.

Morrison says he would rather be in Australia now “with the way we are dealing with this together” than anywhere else. He says this after speaking with G20 leaders last night.

We might have to keep our distance but it doesn’t mean we have to disconnect from each other, Morrison says.

He says we need to support each other and no Australian should have to go through this alone.

PM thanks Australians for their behaviour

Here we go, the prime minister starts by thanking Australians for the “very significant changes that we’ve been asking you to make to your lives and to your livelihoods”.

“We always knew Australians are up to this test.”

Keep doing it he says. Washing hands. Staying 1.5m apart. Only going out when necessary.

One of Australia’s largest aged care providers has banned all visits to its homes citing the “growing risk of Covid-19 infection” and government advice on social distancing.

“We have now made the difficult decision to stop all visits to Bupa aged care homes starting tomorrow, Saturday 28 March,” Suzanne Dvorak, the managing director of Bupa Villages and Aged Care Australia, said in a statement.

Hundreds of people stranded on a cruise ship in Western Australia will be evacuated to Germany within days, but seven passengers with coronavirus will likely be treated locally.

Most of the almost 832 passengers onboard the German-owned Artania vessel will be flown to Frankfurt on charter flights.

“By the end of the weekend, nearly all of them will be evacuated on three planes back to Germany,” the finance minister, Mathias Cormann, told Sky News on Friday.

Seven people – five guests and two crew members – have been infected with coronavirus and have mild symptoms.

Cormann indicated they would receive medical care in Australia.

“Some appropriate arrangements will be put in place locally, again, in close coordination and consultation between the federal and state governments,” he said.

On Thursday the state government insisted the commonwealth must manage those people.

One ill person, who does not have coronavirus, was taken off the ship by boat on Thursday for medical treatment.

The ship was later allowed to dock in Fremantle after a second person became unwell with an unrelated illness, but no one else disembarked.

There are no Australians on the vessel or on the cruise ship Magnifica, which is anchored off Fremantle but does not have any coronavirus cases.

About 200 locals on board the Vasco da Gama will go into quarantine on Rottnest Island for 14 days next week, while about 600 other Australians will likely return to their home states.

A small update from the national cabinet meeting. The prime minister, Scott Morrison, will hold a press conference at 2.15pm. Stay tuned and we will be here when that begins.

Livestock saleyards will continue to operate through coronavirus shutdowns, the Australian Livestock Markets Association has said.

In a joint statement with the National Farmers’ Federation, Australian Meat Advisory Council, Cattle Council of Australia and others, the association said it had been assured by the federal agriculture minister, David Littleproud, that saleyards would be allowed to continue to operate as an essential part of the food supply chain, provided they follow new safety precautions.

Those precautions include limiting attendance at sales to “essential saleyard site staff, accredited livestock agents and essential agency staff along with genuine buyers with a true intention to purchase”.

The group thanked LIttleproud for a “pragmatic and commonsense decision today”.

“The decision allows our sector to get on with producing world’s best red meat for Australians, in what are challenging times for our nation,” they said.

The Australian market has slipped back into the red after being up as much as 2.4% in early trade.

It began to fall shortly before midday and by about 1pm was down 1.7% for the day.

This morning the market was shaping up for a fourth day of increases in a row.

We explained why rushing in to buy shares after a bounce like this might be a bad idea earlier today.

An update on repatriation flights for Australians stranded in South America:

Tour company Chimu Adventures, with logistical support from the Australian government, has organised a flight for Australians in Peru and Chile likely to leave on Sunday.

The flight will fly Lima-Santiago-Sydney. Passengers will be brought from Cusco to Lima’s military airport (from where the flight will depart) on a separate internal flight.

All passengers will have to undergo health screening before boarding, and they will have to wear a mask for the flight. Passengers have been told they will not be permitted to board without a mask.

The flight is over-subscribed. However, many Australians stuck in Peru could not afford the $5,000 ticket for an economy fare on the flight, or missed out on booking, while others are in remote parts of the country, in total lockdown, with internal movement banned, putting airports out of reach. About 140 Australians will be left in Peru after the flight leaves.

Another flight is bringing Australians home from Montevideo, collecting passengers off the Ocean Atlantic cruise ship as well as other Australians in Uruguay.

Some Australians were able to leave Bolivia in recent days on commercial flights, Australia’s ambassador, Diana Nelson, said. Bolivia has tightened lockdown restrictions. Nelson said adults were allowed to leave their accommodation only once a week, and only to go shopping between 7am and midday.

All accommodation is locked down at weekends. Those out shopping are required to carry ID, as well as a mask and gloves.

NSW has released more data as part of its daily Covid-19 updates. The number of infections connected to cruise ships is up again. Remember, the total number of known infections in the state is 1,405. Here is what we know:

Previous EPA relaxes enforcement of environmental laws during the COVID-19 outbreak
Next Coronavirus Outbreak LIVE updates: 50% of Maharashtra’s patients aged 31-50, says report; US surpasses China with most number of cases in world