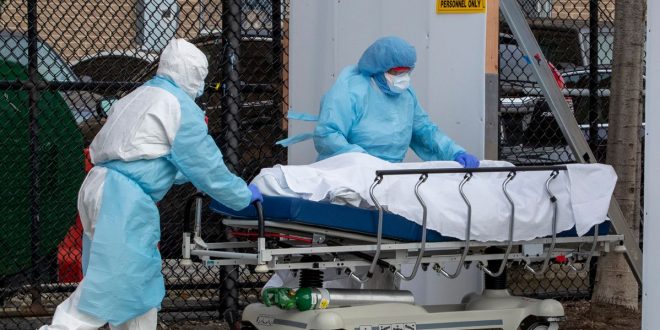 The death toll from the new coronavirus surpassed 10,000 nationwide on Monday, according to data compiled by Johns Hopkins University.

More than 347,000 cases of the novel coronavirus have been confirmed in the U.S., and over 1.3 million have been reported globally. At least 72,000 people across the world have died from COVID-19, the disease caused by the virus.

New York state has reported a sizable chunk of the total confirmed cases in the U.S. with more than 122,000 known infections. More than half of those cases have been recorded in New York City.

China documented the world’s first known case of COVID-19 in December. Scientists believe the virus was transmitted from a bat to humans via an intermediate animal.

The U.S. documented its first known case on Jan. 21 in Washington state. The patient was a man in his 30s who had developed symptoms after returning from a trip to China.

As of Monday, at least 176 countries have reported infections. The U.S. has reported the third highest number of COVID-19 deaths, trailing behind Italy and Spain, which have suffered more than 16,000 and 13,000, respectively.

Previous Covid-19 crisis: ‘We have had to learn a new disease, new vocabulary, new skills’
Next The Voices Behind Trump’s Push To Treat COVID-19 With Unproven Anti-Malarial Drug