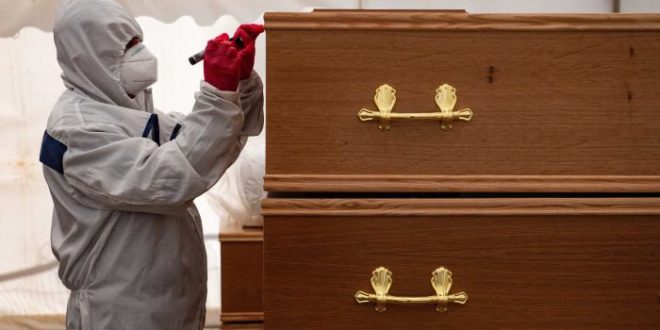 England and Wales have hit a grim milestone, providing more evidence that the true devastation from the coronavirus pandemic is far higher than the official statistics suggest.

The countries have now recorded the most deaths in a single week for at least 27 years, when official weekly statistics began.

If this were a normal year, you would expect only around 10,000 people to have died in that week.

The number of ‘excess deaths’ above what you’d expect to see in a typical year is growing fast in England and Wales, and it’s a better way of measuring the true impact of the pandemic.

Professor Alan Lopez from the University of Melbourne, a leading international expert on the burden of disease, said official statistics were vastly underestimating the true death toll across the entire world.

“The all-cause death rate is the very best way to assess the overall net impact of COVID-19 on mortality,” he said.

“Typically we’re seeing between 50 and 80 per cent excess when we try and count all the deaths using the excess mortality, over and above what’s reported.

“That’s pretty standard, whether it’s China, the UK, the Netherlands, Spain, they’re all pretty much the same.”

In England and Wales the excess death curve dwarfs the official statistics.

If 2020 were anything like other years in the past decade, you would expect about 176,000 people would have died by now in England and Wales.

The countries have recorded more than 31,000 deaths in excess of that, far exceeding the coronavirus death toll for the entire UK, currently just over 26,000.

But the UK isn’t the only government underestimating the true impact of COVID-19.

One reason for the major underestimates is that in many countries only deaths in hospitals are being counted, excluding nursing homes, which are also reporting significant deaths.

Until today, that has been the basis for UK statistics.

The UK Government is now going back through the records to add in thousands of nursing home deaths.

As a result of just the first batch of nursing home deaths being added, the UK now has the third most deaths officially reported of any country, up from fifth yesterday.

Professor Lopez said there were other deaths still being missed.

“On top of that, of course, there are people in the community who have not been tested but who have contracted the virus and died as a result,” he said.

That’s a bigger issue in nations that have experienced severe testing backlogs.

Other patients with completely unrelated conditions may also be missing out on treatment as hospitals strain under the load.

“We haven’t yet done any studies on it, but anecdotally there is evidence that people are avoiding going to hospital even though they’ve got acute coronary events or have suffered a stroke or really do need to get to an emergency department,” Professor Lopez said.

“Many of those may well be dying … you’ll pick up those cases in the excess death rate.”