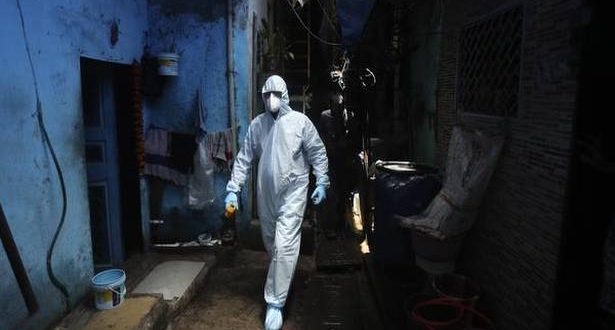 The Union Health Ministry on Sunday said the Maharashtra government and the Brihanmumbai Municipal Corporation (BMC) have been able to effectively bring down the COVID-19 spread in Dharavi.

“They have actively ‘chased the virus’ and aggressively conducted targeted tracing of suspects,” the Ministry said.

“The proactive measures adopted by the BMC have reduced the growth rate to 4.3% in May and further to 1.02% in June. These measures also ensured an improved case doubling time to 43 days in May and 78 days in June.”

It said several challenges presented themselves to the BMC where 80% population depends on community toilets and about 8-10 people live in households/hutments which measure about 10ft x 10ft coupled with narrow lanes with 2-3 storied houses where often the ground floor is a house and the other floors are used as factories. Hence, there are severe limitations of physical distancing with no possibility of effective ‘Home Quarantine’.

“The BMC adopted a model of actively following four T’s – Tracing, Tracking, Testing and Treating. A salient feature of its response strategy is strict enforcement of containment measures with three primary components — an effective containment strategy, conducting comprehensive testing and ensuring uninterrupted supply of goods and essential supplies to the community. Also only critical patients were moved outside Dharavi for admission to hospitals; 90% of the patients were treated inside Dharavi itself,” said the Ministry.